This past week, I attended the Conference Board’s Government Relations Executive Council meeting. Much of the discussion revolved around current social issues—abortion, equity, guns, January 6th, ESG—and their potential impact on corporate operations. For instance, Jen Stark, Co-Director of the Center for Business and Social Justice spoke on the need for businesses to prepare themselves for the fall of Roe vs. Wade. And Anna Palmer, the founder and CEO of Punchbowl News, led a discussion about the outlook in Congress heading into the midterms. By the way, Punchbowl is the hot new trending newsletter in D.C. It focuses exclusively on the legislative branch, and it pulls its title from the Secret Service’s code name for the Capitol building, “The Punchbowl.” Inevitably, the discussion turned to possible 2024 presidential candidates, on the left and right, if President Biden and former President Trump decide not to run (most lobbyists in attendance still believe a Biden-Trump rematch is likely, although all say it’s far too early to make any real predictions). Still, it was surprising, almost startling, for me to hear one of my colleagues tout Transportation Secretary Buttigieg as “easily the most articulate and experienced” candidate among Democratic contenders. My colleague is the head of Government Affairs for a major corporation, and a lobbyist I have always admired and respected very much. No doubt, Secretary Buttigieg is quite articulate, but in making the case for his being the “most experienced,” my colleague linked directly to their shared sexual orientation. While I can think of many off the top of my head on the Democratic side who I believe to be more experienced than the current Transportation Secretary—Hillary Clinton, Vice President Harris, Senators Sherrod Brown and Amy Klobuchar, North Carolina Governor Roy Cooper…—what struck me was my colleague’s assertion that sexual orientation was a form of experience. Upon further reflection, what he was actually describing was the pursuit of “equity” over “equality of opportunity.” The problem with equity—defined as equal outcomes for varied identity groups—is that it, ironically, denies the role of individuality (is there any job in the world that requires an in-depth examination of individuality more than president of the United States). Rather than offer equal opportunity by viewing an individual’s unique assets and abilities, “equity” is limiting in that it views the world through a narrow lens—race, sexual orientation, or identity group. Proponents of equity over equality view the world as a struggle between the inherently advantaged and the inherently disadvantaged, the “marginalized” over the “non-marginalized.” Rather than focus on the person, advocates of equity merely count and sort, with little to no regard for individuality. Unfortunately, it’s a feeling of defeat and a notion that individual effort cannot compete against systemic barriers. Because equity is, by definition, discriminating, its drawback is that it makes the admirable goals of diversity and inclusion impossible. Only by viewing the individual and offering all an equal opportunity can the ideals of diversity and inclusion be reached.

Capital Alpha: A Big Win for Solar Will Come With Costs Elsewhere. President Biden’s decision to waive tariffs on solar modules imported from Southeast Asia for two years was a big win for solar energy developers. In fact, the president’s order is expected to withstand litigation. However, the second-order effects on the president’s trade agenda and the Congressional legislative agenda will have come with their own consequences. Most notably, use of the Defense Production Act (DPA) is a poor consolation prize for failing to pass new legislation that would support the U.S semiconductor and clean energy industries with significant tax breaks. Additional information on the solar decision, litigation risk, the President’s trade agenda, clean energy tax credits, support for the semiconductor industry, and the DPA is available from Capital Alpha.

Eurasia Group: Recent Primaries in California Highlight Democrats’ Issues in Addressing Crime. The successful recall of San Francisco District Attorney Boudin and the forced runoff between former Congresswoman Karen Bass and Rick Caruso in the Los Angeles mayoral race were blows to progressives and reflect voter concern over rising crime and homelessness. Nationally, Democrats face similar issues ahead of the 2022 midterms; polling data shows that concerns over crime have reached their highest level since 2016, and Democrats, especially in swing districts, are struggling to distance themselves from the “defund the police” narrative. President Biden has even tried to reverse that narrative. As progressives continue to push for police reform rather than expanded enforcement, Democrats are left without a cohesive party platform ahead of elections. Although the impact is unlikely to sway the overall results of the midterms, where Republicans are heavily favored to win the House (90% odds) and likely the Senate (65% odds), it will leave moderate Democrats at greater risk and could make a Republican wave more likely.

Eurasia Group: U.S. Government Won’t Have Much Fiscal Firepower Left in Case of Recession. A recession induced by the Federal Reserve, an extended pullback in consumer spending, consistently high oil prices, or a global slowdown would only add to Americans’ impressions that the economy is hurting,  and it would be another headwind for Democrats heading into the 2022 midterm elections. While a Chinese slowdown would be seen as an opportunity by China hawks in the U.S. government to accelerate decoupling, Congress would be unlikely to respond with much in the way of fiscal stimulus if there were to be a recession. This would put the Fed in the difficult position of having to fight inflation and falling demand at the same time. A strong recovery in 2024 could set up a “Morning in America” narrative that would be good for whichever political party controls Congress, but may be too late to save President Biden, who could face a challenge from within his party early next year, prompting him to decline to run for reelection.

National Association of Manufacturers (NAM): Concerns about ‘Stagflation’ Go Global. The World Bank shrunk its global growth forecast to 2.9%, down 1.2% from January, and said “subdued growth will likely persist throughout the decade because of weak investment in most of the world.” The view is that repeated COVID-19 lockdowns in China, the highest inflation in decades, and Russia’s war in Ukraine act as “overlapping crises” that increase the likelihood of an extended period of global stagflation—one in which inflation rates are high and economic growth is weak. This will be the first time the global economy faces such a serious risk of stagflation since the 1970s, when oil crises stalled economic growth and raised prices. Analysts believe that the risk from stagflation is considerable, and may have potentially destabilizing consequences, particularly for low- and middle-income economies. At the same time, some economists predict that U.S. economic growth will begin to rebound this quarter and that the chance of worrisome stagflation in the U.S. is remote.

“The bottom line is how do we fight inflation? That’s all. If they’re not serious about really getting our financial house in order and fighting inflation, paying down debt, then it’s all for naught,” Sen. Manchin (D-WV) talking down the prospect of a deal to revive the Build Back Better bill.

More than 100 senators served in the military during WWII, and several future senators participated in D-Day, the June 6, 1944, Allied invasion of Nazi-occupied France. Future Sen. Philip Hart (D-MI) landed at Utah Beach with the Army’s 4th Infantry Division where he was hit by an artillery shell in his right arm; future Sen. Lee Metcalf (D-MT) landed at Omaha Beach; and future Sen. Strom Thurmond (R-SC) parachuted into Sainte-Mère-Église to organize local resistance against the Nazis behind enemy lines.

The Conference Board’s Measure of CEO Confidence declined sharply in May. In the U.S., the measure fell to 42 in the first half of 2022, while confidence levels in Europe dropped to 37. At 34, confidence levels were lowest among CEOs of multinational companies in China, where the measure was taken for the first time. High energy prices, renewed supply chain disruptions, heightened geopolitics risks, and eroding consumer confidence, on top of new lockdowns in China, are all putting downward pressure on growth prospects. In fact, The Conference Board downgraded its global GDP growth forecast to 2.9% for 2022 and 2.4% for 2023. Growth in 2022 had been expected to reach 4% before the start of the war in Ukraine. 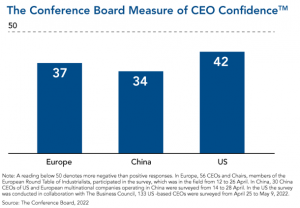