Outside of each year’s sprint to the month-long August recess, in Washington, there’s nothing quite like the dash to the July 4th recess to focus legislators’, policymakers’, and staffers’ minds. It’s a second-to-last- chance to get something done before Labor Day, the end of the fiscal year, and, this year mid-term elections. As one would expect, this week has not disappointed. Although the majority of questions I’ve fielded have related to the January 6th Commission’s hearings—and the emergence of the LIV Golf Tour—there is so much more on D.C.’s plate, including: decades-high inflation, the Federal Reserve’s 75 basis point rate hike, President Biden’s upcoming trip to Saudi Arabia, the ongoing mid-term election primaries, possible new life for Build Back Better legislation, a bipartisan gun reform bill, the expected release of the Supreme Court’s ruling on abortion, and more. On top of all that, this week, the House will begin assembling a combined $1.6 trillion worth of appropriations bills for Fiscal Year 2023, even though Congress has not introduced, let alone passed, a budget. Recognizing that debt as a share of the economy is on track to surpass record levels within a decade and inflation is at a 40-year high, Congress seems to be not just ignoring regular order for the budget process, but also avoiding the tough choices necessary to reach a more sustainable fiscal path. In some ways this is understandable—it’s an election year, tough choices have real- world consequences, and true philosophical differences about where priorities should lay exist between the two parties. If Congress isn’t willing and able to make the tough choices and trade-offs the budgeting process requires, are you? I recently came across this Debt Fixer from the Committee for a Responsible Federal Budget. The link takes one to an interactive tool that allows the user to gauge whether their own personal budget choices can bring the U.S.’s national debt toward a sustainable trajectory. While far from complete, the generator includes dozens of decision points to make tough choices in areas like defense, health care, and education. Get a feel for what it’s like to sit on the House’s Ways and Means or Senate’s Finance committees. Play budget negotiator to see if you can get the federal budget on a more sustainable path, and even share your results with your specific Member of Congress. Go to: Debt Fixer.

The Conference Board Believes a More Hawkish Fed Will Trigger a Recession. The Federal Reserve hiked interest rates by 75 basis points this week, and indicated that the Fed Funds rate would enter restrictive territory by the end of 2022. These actions may trigger a recession, as both the policy statement and Chair Powell were much more hawkish in tone given recent inflation data. The path to 2% inflation (the Fed’s target) is getting harder to achieve, not easier, and businesses should expect interest rates to rise much faster and higher than previously forecasted. The Fed funds rate may levitate to 3.25% by year-end and to about 3.75% by the end of next year. Meanwhile, retail sales unexpectedly declined in May. Monthly sales fell 0.3% percent from April, but when adjusted for inflation declined by 1.2%; economists had expected a gain of 0.1%. Core retail sales, which exclude auto and gas sales, rose 0.1%, less than the 0.5% forecast.

The Mood in D.C. is ‘Bleak,’ Says the Eurasia Group’s Ian Bremmer. It’s an unusual time to be in the nation’s capital. President Biden sits at the lowest popularity of his presidency, even below where President Trump was at the same point in his presidency. Part of the reason for this is unprecedented partisanship, but the others involve unhappiness with inflation, immigration policies, and crime. There is no out for any of these challenges in the near-term, which likely means a wave election for Republicans in the House, although a tight vote is still expected in the Senate. When in D.C., it is becoming obvious that representative democracy isn’t working. A visit to the nation’s capital included a walk past a fortress-like Supreme Court, and against this stood the backdrop of the January 6th commission’s case linking President Trump to direct involvement in a violent attempt to overturn the outcome of a legitimate election. Yes, there’s still some governing going on in Congress—centrist Democrats and Republicans in the Senate intend to pass bipartisan gun reform legislation, and Democrats recognize that they have a last, best chance at moving a more limited “Build Back Better” bill, which could include deficit-reduction components along with support for climate and drug pricing. But these are silver linings in a dark cloud. There are growing expectations that the upcoming presidential elections will lead to serious violence, irrespective of who wins.  A Trump loss, or loss of a Trump-picked candidate, will be “Stop the Steal” on steroids, with legislatures likely to actively contest outcomes in key swing states. While a Trump win would be seen as illegitimate and unacceptable by the left, it’s increasingly likely that there will be competitive primaries in both parties in 2024. Multiple Republicans are already testing how much space there is for a post-Trump candidate, and increasingly emboldened Democrats are discussing someone other than the incumbent president at the top of the ticket. In fact, the passing of the torch from either a would-be authoritarian ex-president or an aging unpopular incumbent would be a good sign for the health of American democracy. Regardless, the Department of Homeland Security has already alerted local police and intelligence agencies to begin planning for and to expect unprecedented levels of domestic extremism…on both sides of the political aisle.

Eurasia Group: President Biden’s Saudi Visit Reflects Strategic Value of Reset. The White House has confirmed that President Biden will travel to Saudi Arabia in July for the Gulf Cooperation Council’s summit, which also includes Egypt, Iraq, and Jordan. The visit will include meetings with King Salman and Crown Prince Mohammed bin Salman; President Biden will also travel to Israel as part of a larger regional visit and participate in a virtual summit with leaders from Israel, the UAE, and India. Confirmation that the president will travel to Saudi Arabia and meet with MBS more than likely means that the framework of a deal on oil production and U.S. policy toward Saudi Arabia’s regional position has been struck. Limits on what both Washington and Riyadh can offer mean that the tangible results of any meeting may underwhelm expectations in Washington and open President Biden to criticism from those opposed to re-engagement with Saudi Arabia.  Facing the reality that the U.S. does not have the luxury it once thought it did to isolate Riyadh, the White House now sees long-term value in moving forward with a meeting to reset relations even if it comes with domestic political costs. President Biden’s willingness to travel to the kingdom shows the extent to which his efforts to lower gasoline prices and further isolate Russia over its invasion of Ukraine have overridden his desire to take a harder line against Riyadh.

The Global Business Alliance (GBA) Lobbies Against Troubling Outbound Investment Language. The effort to reconcile the Senate’s United States Innovation and Competition Act (USICA) with the House’s America COMPETES Act includes new draft language based on outbound screening provisions included in the House’s version. Although the new text narrows the investment screening to certain specified sectors, the definition of “Foreign Entity” included in the bill would directly affect GBA members (SCOA is a member of the GBA). Among other things, the legislation aims to establish a review process for investments into “countries of concern” [China], but the current draft would apply to U.S. persons and companies as well as any “Foreign Entity,” which is defined as any company whose principal place of business is outside of the U.S. or whose securities are primarily traded on foreign exchanges. This definition would even include companies with no operations in the United States. Given the unprecedented extraterritorial nature of this proposal, GBA has directly engaged with Congress and the Biden administration and has encouraged GBA members to lobby the provision’s supporters and other conference committee members directly. Additional details can be found at this link: https://www.wsj.com/articles/bipartisan-lawmakers-propose-new-government-powers-to-block-u-s-investments-in-china-other-nations-11655147194?mod=itp_wsj&mod=djemITP_h.

“I think when inflation is as high as it is right now, and unemployment is as low as it is right now, it’s almost always been followed within two years by recession. I think they’re wrong now if anyone’s highly confident that we’re going to avoid recession,” former Treasury Secretary Summers.

“We’re not trying to induce a recession now. Let’s be clear about that. We’re trying to achieve 2% inflation with a strong labor market—that’s what we’re trying to do,” Federal Reserve Chair Powell.

“We will cross that bridge when we get to it,” Rep. Alexandria Ocasio-Cortez (D, NY14) on whether she would endorse President Biden in 2024.

Flag Day is celebrated on June 14. It commemorates the adoption of the flag of the United States on June 14, 1777, by resolution of the Second Continental Congress.

President Biden’s stark tone when discussing inflation reflects broad concern among the American electorate about the state of the economy, despite strong employment figures. Consider that the University of Michigan’s consumer sentiment index hit its lowest level on record, even before a government report showed that consumer prices leapt 8.6% in the year to May, the most in 40 years. 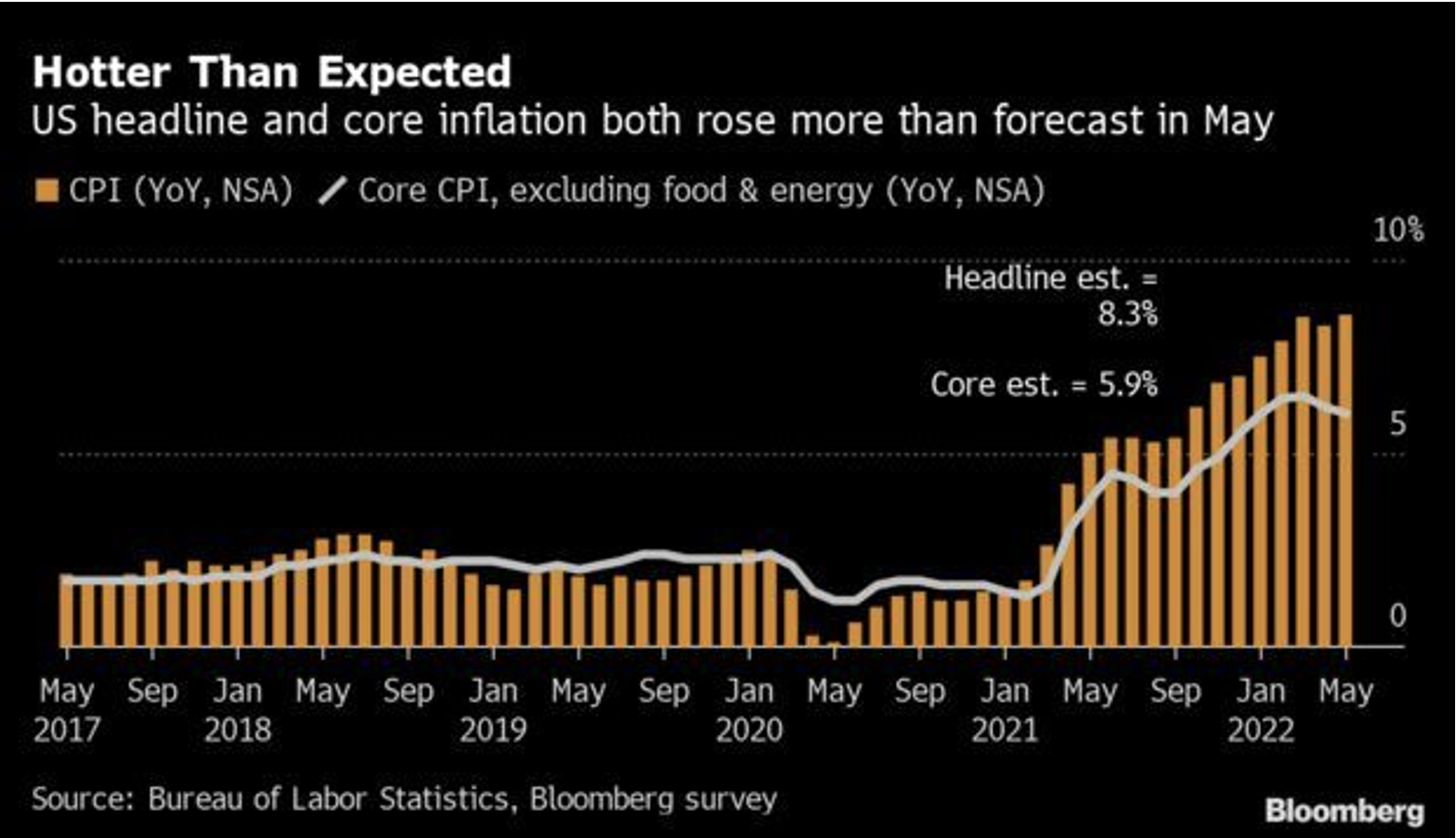