I’ve never seen The Crown, and I couldn’t name one character on Downton Abbey. I’ve never been to London, and I can barely remember my mother’s excitement watching Prince Charles’ and Lady Di’s wedding. My connection to the land where my last name originates, sadly, seems to be limited to each year’s British Open scores and watching the array of cooking shows with Chef Gordon Ramsey as the star. Still, today, I admire the British people. This week marks Queen Elizabeth’s jubilee celebration as England’s longest serving sovereign. 70 years is a long time; so long, in fact, that it is 2 1/3 times as long as I’ve been with Sumitomo. Why do I admire a foreign nation whose institution the U.S. rejected nearly 250 years ago? It’s largely because of the way a nonagenarian great-grandmother has given her entire country something it can unite behind. Despite wielding no formal political power, she has led in a dignified and self-effacing way. There’s even been a bit of mystique in the way Queen Elizabeth has reigned and represented the best qualities of her entire nation. The Queen’s lifelong commitment to duty, service, and state seems to have no contemporary equivalent in the U.S. Whereas the U.K., and Europe more generally, has always been a state-worshiping culture, and no one personifies the state more than Queen Elizabeth, individualism is an American concept. While European culture is steeped in the altruistic idea that man must exist for others and is duty bound to serve, or be rewarded by, the state—is there a better example of this than British knighthood—it is the exact opposite in America. The U.S. was the first country in history that was deliberately founded on a philosophy, rooted in Aristotelianism, which respects the individual and holds that society should be based on individual rights. Ironically, even more so than under the European ideal, to succeed, American individualism requires its most visible actors to operate with utmost honor and integrity. Four-term Congressman JC Watts described American individualism at its finest when he said, “character is doing the right thing when nobody’s looking.” Unfortunately, in the America of today, presidents seems to come and go; Congresspersons treat each other with scorn and contempt; athletes join leagues financed by thuggish and repressive regimes; and movie stars sue each other in court. Britain is lucky. They have a queen who exemplifies their ideal of what the state should be. But in the U.S., there’s a void we all feel. Surfing the channels on my car radio the other day, a lyric from a song seemed as relevant today as when it was first asked, “Where have you gone Joe DiMaggio, America turns its lonely eyes to you.”

National Journal’s Charlie Cook Asks, “Even in a Great Year, How Much Political Upside is There?”

We know that in the last six months before a midterm election the clear direction of the campaign almost never reverses. What’s more, midterm elections are typically referenda on the sitting president and governing party. While conditions can improve or deteriorate, the direction, generally speaking, doesn’t reverse. Therefore, it is important to note that President Biden’s approval ratings have slipped below those of even Donald Trump’s at this point of their respective presidencies, and are the lowest of any elected president in the post-World War II period in May of their second year. Although things could change, recent history looks ominous for Democrats. President Biden’s 41% approval rating is 1 point below that of President Trump’s in the May before the 2018 midterms, and 2 points below Trump’s final, pre-midterm-election survey. As one might have expected, Republicans lost 42 House seats in that 2018 election. To put Biden’s approval numbers in historical context, his current ratings are 7 points below Bill Clinton’s 48 percent in May of his second year, and 5 points below where Clinton’s were going into the 1994 midterms, when Democrats lost 54 seats in the House. While President Obama was 7 points higher at this point, his party still lost 64 seats in the 2010 election. With inflation running at a 40-year high and fears of a recession growing, this would be a flammable situation for any party in power. Even worse, the public’s memory of the Biden administration insisting that there would be no inflation problem is not hazy in the least, and can be likened to Trump’s dismissiveness about the coronavirus. While abortion, guns, or both may come to haunt Republicans in the future, perhaps 2024 or more likely 2026, in the near term, nothing is likely to overshadow the economy. In modern times, wave elections have tended to come from a party well behind in seats. Republicans’ House gain of 54 seats in 1994 was from a starting point of just 174 seats; their 64-seat pickup in 2010 was from 178 seats. When Democrats gained 42 seats from Republicans in 2018, they started with just 194 seats. Allocating the currently vacant seats into the column they had come from, Democrats hold 222 seats and Republicans 213, well above the GOP levels going into 1994 and 2010 and Democrats in 2006. As a result, most estimates of likely GOP House gains range from a low of a dozen to close to three dozen. The current outlook from The Cook Political Report is a Republican gain of between 20 and 35 seats.

Optimism from Capitol Hill Suggests Build Back Better is Not Dead Yet, Says Eurasia Group. Growing confidence from Capitol Hill on the direction of fiscal policy talks has led analysts and lobbyists to increase the odds from 20% to 30% that a revised Build Back Better bill will pass this year. The key components of such a bill would be energy tax credits and enough corporate and high-income tax hikes to reduce the deficit by between $500 and $750 billion over the next ten years. While talks continue to proceed between Senate Democratic leaders and Senator Manchin (D-WV), the fact that any bill will require near unanimity among Democrats means that any deal will have to be ratified by a diverse group who hold a wide range of red line requests, from an expanded Child Tax Credit to the State and Local Tax (SALT) Deduction. If a bill comes together, July is the key month to watch for progress, as Congress will need to pass something before going home for the month-long August recess; the reconciliation bill that Democrats are counting on using expires at the end of the fiscal year on September 30.

National Association of Manufacturers (NAM): Fewer In-Office Workers Will Change Makeup of Cities, Suburbs. In cities with longer commute times from the suburbs, fewer employees are returning to the office following the COVID-19 pandemic—and the change is costing local economies. Eight of the 10 major cities with the biggest drop in office occupancy during the pandemic had an average one-way commute of more than 30 minutes. Meanwhile, six of the 10 cities with the smallest drop in office occupancy have average commutes of less than 30 minutes. The phenomenon seems to be global, with “commuter cities” such as Los Angeles and London seeing emptier office buildings than larger cities with good infrastructure and sufficient supplies of affordable housing, such as Copenhagen. The issues is important because luring commuters back is critical to central business districts that depend on these workers to support bars, restaurants and other small businesses that fuel local economies. However, workers continue to indicate they are not eager to give up schedule flexibility and a sense of improved work–life balance—on top of the time/money saved from not commuting. A fundamental change in city planning could result. A number of analysts expect cities to evolve away from pure business districts and toward more mixed-use neighborhoods. In addition, as fewer people commute to city centers, more offices and meeting rooms will open in residential neighborhoods and in suburbs.

“Well, look, I think I was wrong then about the path that inflation would take,” Treasury Secretary Yellen.

The Lincoln Memorial turned 100 this week, and remains, by far, the city’s most popular monument. While the original designs called for either a Mayan temple or an Egyptian style pyramid, those were ultimately rejected in favor of the Parthenon design that more than eight million people visit every year.

Limited Refinery Capacity a Downside for Biden’s Energy Woes. President Biden’s low approval ratings are likely to suffer further this summer from spiking energy and food prices. Limited global refining capacity is an increasingly important driver of gas and diesel price increases, in addition to high oil costs and ongoing disruptions from the war in Ukraine. Capacity shortages have affected diesel prices more than gas prices, raising the cost of agricultural production and disrupting supply chain logistics. These challenges will not be easy to solve, and several solutions the administration is considering—including tapping diesel reserves, soliciting Saudi Arabia, and waiving environmental rules for summertime gas blends—are only partial fixes that come with political downsides; more aggressive options, such as, limitations on U.S. energy exports may gain attention but are unlikely at present. 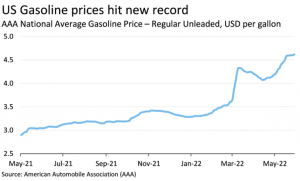