What Happens When Everything is Labeled a Crisis? “You never want a serious crisis to go to waste. And what I mean by that is an opportunity to do things that you think you could not do before.” Rahm Emanuel uttered these famous lines shortly after Barack Obama had been elected president in 2008 and just before the current nominee to become Ambassador to Japan became President Obama’s Chief of Staff. While Emanuel claims his quote has largely been taken out of context and he was referring to addressing longstanding problems with “ideas from both parties,” the quote became so closely tied to the partisan advancement of Obamacare that many conservatives point to the famous lines as an example of how progressives aim to exploit circumstances to ram through a partisan agenda. What is lost in this debate is what happens when everything is labeled a crisis? Today’s atmosphere is one defined by overwhelming crises. We have the climate crisis, health care crisis, energy crisis, housing crisis, drug crisis, debt crisis, migrant crisis, education crisis, constitutional crisis, and many more. The term crisis is applied in so many fields—foreign affairs, domestic politics, climate, culture, and economics—and to so many situations, that there is no logic or novelty in its application, and the term has little meaning beyond a catch-all for trouble. The problem with labeling everything in public policy a “crisis” is that regular order goes by the wayside, and every issue becomes caught up in a zero-sum game, in a winner take all bill. Rather than addressing real life issues in a deliberate manner and from a standpoint where advancement on real issues can be made, the crisis label sets up intractable standoffs, provides a basis for radical solutions, and offers excuses for not taking action. Take climate change. This week, the Intergovernmental Panel on Climate Change (IPCC) issued its latest assessment report; unsurprisingly, it is full of alarmist predictions and the claim that “human caused climate change has now become irreversible.” The truth is that the earth has been warming due to both natural and human causes, and the same IPCC report notes in its scientific chapter that scientists disagree sharply about the significance of climate change and the analytic tools used to evaluate it, let alone whether it is “irreversible.” However, the crisis label, and underlying efforts to support the label, have led progressives, in the current reconciliation bill, to make an undiversified bet to address climate change by taking natural gas off the table and basing their approach entirely on renewables, shipped nationwide, on a grid that does not exist, with technology that does not exist. Our leaders, on both sides, need to dial back policy hyperbole because once everything is labeled a crisis, then nothing is.

Eurasia Group: President Biden’s Political Struggles Reduce the Odds of Passing a New Spending Bill Package. A key factor in passing the reconciliation bill was supposed to be the influence President Biden would have with moderate members of his party in cajoling them to vote for the progressive policies contained in the bill. This influence has yet to materialize. Now, with the president’s approval ratings showing signs of weakness and intraparty divisions becoming public, the odds of passing a large new spending package by year-end have declined from 80% to 70%. Meanwhile, at the same time that House progressives announced they have the intention and votes to block approval of the bipartisan infrastructure bill (BIB), Senate moderates are strongly signaling that they are not in favor of moving ahead with the partisan reconciliation bill. The result: an impasse over the President’s two main priorities that could last for months. All of this as a high-risk standoff over the debt limit will dominate Congress’s attention for the next four to six weeks and potentially result in a technical default (a 20% probability).

Trade Analyst Laura Chasen: CPTPP: China Formally Applies. China’s announcement that it has formally requested to join the CPTPP was not a surprise; top Chinese leaders have been suggesting for years that they are interested in membership. Still, the formal submission roils trade relationships in the region and forces the question of whether the U.S. will seek to re-enter the pact abandoned by President Trump in early 2017. It is unclear why the announcement was made at this time, but there is speculation that Beijing was eager to counter U.S. moves to shore up relations in the Asia-Pacific. China’s request adds to already mounting pressure on the Biden administration to rejoin the pact. Although White House officials have said they will not take any major steps on trade until they finish work on their domestic priorities, President Biden has never ruled out rejoining the CPTPP. Decision time may be approaching, however, with congressional action on the President’s spending bills expected to conclude by year-end. With pressures to shun the CPTPP coming from labor unions, parts of heavy industry, and anti-free-market leftists, President Biden may hold off on a decision until after the November 2022 elections. Because most current pact members would welcome U.S. membership, one reason for opposing China’s entry is that it could put Beijing in a position to veto a future U.S. accession bid. It is likely that if the U.S. does try to reenter, it would make demands beyond simple reactivation of its membership to include strengthened provisions on labor and the environment. Because it is not clear how others would react, U.S. membership is not assured even if Washington decides to try.

“I was feeling the spirit, and I wasn’t thinking about a mask…we don’t need the fun police to come in and micromanage and tell us what we should or shouldn’t be doing.”

Five states—Maine, West Virginia, Vermont, Delaware, and Wyoming—have no cities with a population over 100,000.

AEI: Explaining Income Inequality. The discussion on U.S. income inequality often focuses on relative differences between low- and high-income households. However, there is also reason to analyze demographic differences among income groups. The chart below outlines key demographic characteristics of households by income quintiles. It shows that household demographics—the number of earners per household, marital status, age, and education—are highly correlated with household income. Specifically, high-income households have more income-earners and are more likely to be well educated, married, working full-time, and in their prime earning years. The good news being that many of the factors that explain differences in household income are not fixed and are largely under an individual’s control. 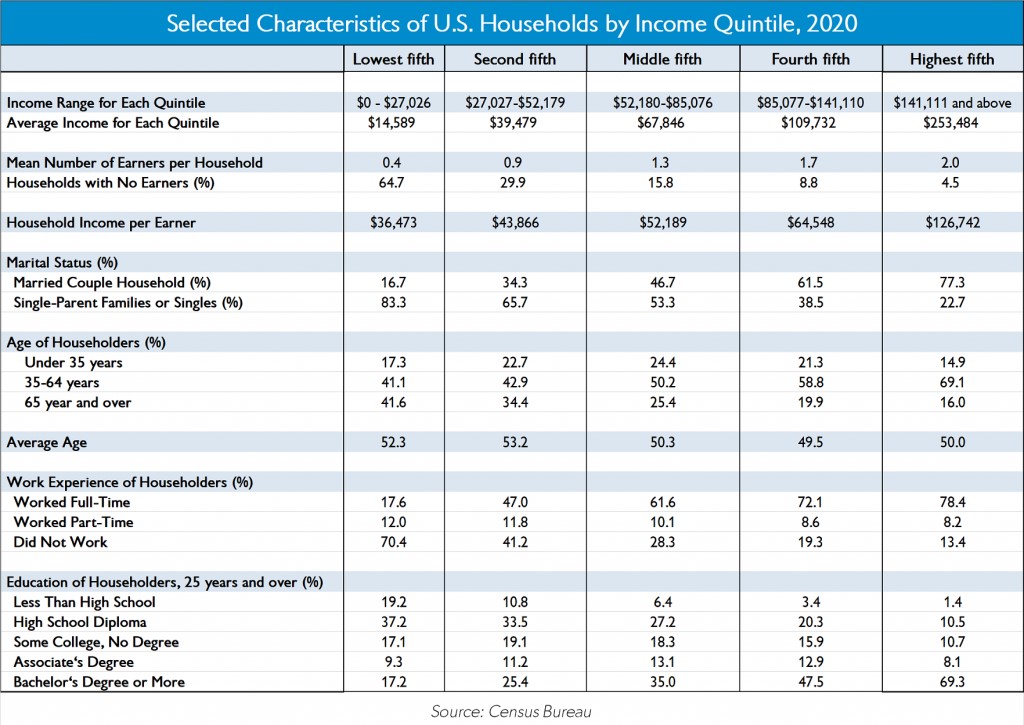