What does a lobbyist actually do? It’s a question I hear quite often, even living in Washington, D.C., which is home to more than 12,000 active lobbyists. In fact, the lobbying industry is arguably the U.S. government’s oldest profession and is protected by the First Amendment. While the term “lobbyist” dates back to 1850, when President Ulysses S. Grant dubbed those who waited for him in the lobby of the Willard Hotel “lobbyists,” lobbying is now a $3.5 billion a year industry. There is no shortage of impressions of what lobbyists or government affairs professionals do; some of those are facetiously depicted in the picture to the right. What we actually do is a lot closer to the image at the bottom right…attend hearings, briefings, and meetings to gain insight into a specific regulation or piece of legislation in an effort to determine how it might affect SCOA business. The simple fact is that every organization and company is impacted by the laws, regulations, and policies passed in Washington, D.C., state capitols, and local government offices across the country. It is the governmental relations professional’s role to educate policy-makers about issues, alert clients or senior management to legislative risks and opportunities, and lobbying Congress and Executive Branch agencies to ensure company views are reflected in policy debates and outcomes. SCOA participates in this public policy arena by: supporting the research of think-tank institutions, who serve as incubators for new policy prescriptions; partnering with trade associations, who advocate on behalf of specific industries; and directly lobbying members of Congress and their staff on a particular issue, or set of issues, important to SCOA. Do not hesitate to contact the Washington office if we can assist you on a particular public policy issue your office is facing.

Eurasia Group: Moderate Inflation Data Not Enough to Change Narratives in Washington. The latest month’s inflation figures show core consumer prices up just 0.1% and 0.3% including food and energy. Although there is hypersensitivity in Washington to economic data because of its connection to the political process, a single month’s worth of data will not be enough to knock either side off their preferred narrative. While inflation is running above trend at 5.3% over the last year, the most recent month’s data will support those who argue the U.S. is going through a transitory inflationary surge. And while Democratic moderates will remain concerned about inflation risk even with several more months of data suggesting it has passed, Republicans will continue to warn about the impact of too much government spending. The political interests of a small number of Democratic moderates will ultimately determine the fiscal space for new deficit spending, and while real world data will inform this, the expected political narratives will continue.

Bloomberg Government: Virginia Race Will Test Political Messaging Ahead of 2022. The competitive Virginia governor race is serving as a testing ground for the congressional campaign messaging that will be used during next year’s midterm elections. For the next several months, Virginia’s airwaves will be filled ahead of the November election with ads from Republican Glenn Youngkin and Democrat Terry McAuliffe on new state laws limiting abortion, a brewing debate on hiking federal taxes for the wealthy, how to address Covid-19, critical race theory in education, and support for law enforcement. To what extent those issues and the way they are communicated move the needle in polling, fundraising, and votes will inform candidates, operatives, and consultants preparing for 2022, when both chambers of Congress will be in play.

Eurasia Group: Congress Headed Toward Debt Limit Showdown. It is estimated that the U.S. will run out of extraordinary measures and lose the legal authority to issue debt sometime in late October; absent a congressional solution, the U.S. will be unable to issue new debt and will be in technical default. In previous stand-offs, legislators moved to extend the limit before any payments were missed, but the current situation does not resemble past debt limit standoffs. Because Democrats have unified control of government and Republicans have relinquished responsibility for being a part of the solution, there is an increased risk of not having a solution by the October deadline. If the deadline passes, Treasury may need to prioritize debt payments over some government services in order to avoid default, a plan developed during the Obama administration. There is roughly a 20% chance of getting to this point before there is enough pressure that one side gives in, but at the cost of a more disruptive period for markets than the recent showdowns of 2011 and 2013. An analysis of the legislative options and how Treasury may respond can be obtained from the Washington office.

“I didn’t retire because I decided on balance I wouldn’t retire.”

Many people believe Washington, D.C., is just 10 square miles. The confusion stems from Article 1, Section 8, Clause 17 of the Constitution, which instructs that the capital city be a District, no larger than “10 miles square,” meaning 100 square miles, and be carved from land ceded by one or more states. In actuality, Washington has an area of 68.3 square miles—61.4 square miles of land and 6.9 square miles of water. 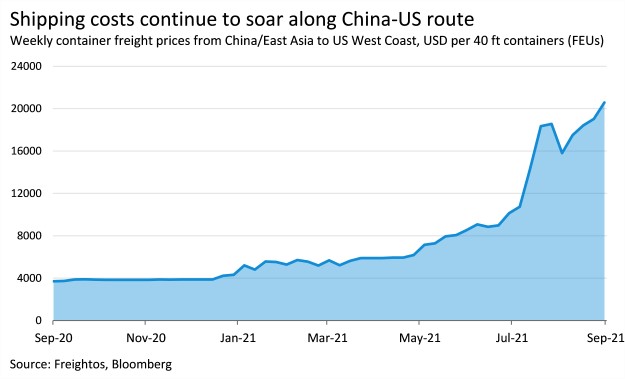