Would the U.S. actually default without a debt ceiling increase? The New York Times: “What a U.S. Debt Default Would Look Like;” USA Today: “What Happens if the U.S. Runs out of Money;” CNN: “No One would be Spared; Debt Default Would Set Off Dire Consequences.” The headlines are clear. Without a debt ceiling increase, the full faith and credit of the United States is at risk and the country will default on its obligations. But is this actually the case; even without a debt ceiling increase, monthly interest on the federal debt runs at just 10-15% of monthly U.S. government receipts? I posed this question at a recent Eurasia Group briefing. The answer: it depends if one is talking about a technical default or an actual default. As you may know, the debt limit caps the total amount of U.S. federal debt outstanding. Unless Congress raises or suspends this limit, the federal government may lack the cash to pay all its obligations. While unprecedented, the Treasury Department has a contingency plan if the debt limit were to breach, and the U.S. were to enter technical default. Under this plan, there would be no actual default on U.S. securities. Treasury would pay interest as it came due, and as securities mature, would pay the principal by auctioning new securities for the same amount (thus, holding the stock of debt held by the public steady). However, Treasury would have to delay payments for some other obligations, possibly flows to agencies, contractors, even Social Security beneficiaries. Although avoiding an actual default, implementation of this plan would likely result in legal challenges, with the argument being that holders of Treasury securities do not have legal standing to be paid before others. The extent of the economic costs of such a technical default, although surely negative, are extremely uncertain. Short-term effects would depend on the expectations of financial market participants, businesses, and households. If the impasse were to drag on, market conditions would certainly worsen, and the effects of allowing a technical default could be severe. While the longer-term damage to the economy would depend on how long the situation lasts, how it is managed, and the extent to which investors alter their views about the safety of Treasuries, the following provides just one hard example. Consider that the U.S. pays a lower interest rate on Treasury securities because of the unparalleled safety and liquidity of the Treasury market. This advantage lowers the rate the government pays on Treasuries, relative to interest rates on the debt of other sovereign nations, by about 25 basis points. Given the current level of the debt, this translates into savings for the U.S. of roughly $60 billion a year, and $700 billion over a decade. At the very least, a technical default would jeopardize this advantage.

National Journal: Democrats sound resigned to losing the House. Given the combination of a narrow majority, redistricting, and historical midterm patterns, Democrats’ fatalism can be seen in their effort to jam as much government spending as possible into President Biden’s first year in office, anticipating that this may be the last chance to do so before Republicans gain back control of at least one branch of Congress. Democrats have been oblivious, however, to the true political cost of pushing through the $3.5 trillion legislation championed by progressives, lacking the imagination to see the downside of pushing beyond their political mandate. It is not just about the House—the Senate, the Supreme Court, and the caliber of elected officials are all at stake. The difference between an average midterm setback and a Republican wave would mean control of the Senate—and the ability to replace Supreme Court Justice Stephen Breyer with a like-minded liberal justice. The difference between the president’s approval hovering around 50% versus the low 40s means Democratic moderates losing to Trumpist Republicans in unlikely places. A GOP landslide may even encourage the former president to run again, if it’s clear the political winds are changing.

The Conference Board: Global Economic Watch. Due to the spread of the Covid-19 Delta variant, 2021 global economic growth has been revised down to 5.1%. The variant’s spread weighs heavily on the outlook for economies in the Asia-Pacific, and the intensifying pressures on Asian supply chains are having negative effects on inflation globally. The U.S. economy will grow by 5.5% in the 3rd quarter and 3.9% in the 4th. Year-over-year growth in the U.S. should reach 5.9% in 2021 and 3.8% in 2022. Although the Delta surge has impacted U.S. consumers’ confidence, consumption appears to be holding up. However, the pivot back to spending on in-person services has been delayed, and businesses continue to struggle to replenish low inventories amidst pandemic-related supply chain disruptions. Economic growth in the Euro area is likely to resume in Q3 at a robust pace after output increased 2.2% in the second quarter. September will be a crucial month for the region’s recovery. Despite high vaccination rates, as people come back from vacation and schools reopen, fears have intensified that the spread of the Delta variant could hold back economic expansion. Meanwhile, China is expecting a slowdown in the second half of the year. The sharp and broad-based falloff in July surprised to the downside. Industrial production, fixed asset investment, and retail sales growth all weakened. There is increasing concern about the “unbalanced” and “unstable” recovery, and the mounting array of growth pressures facing the Chinese economy.

“If this doesn’t happen, I’m going to look like an idiot.”

The “S” in Harry S. Truman doesn’t stand for anything beyond “S.” 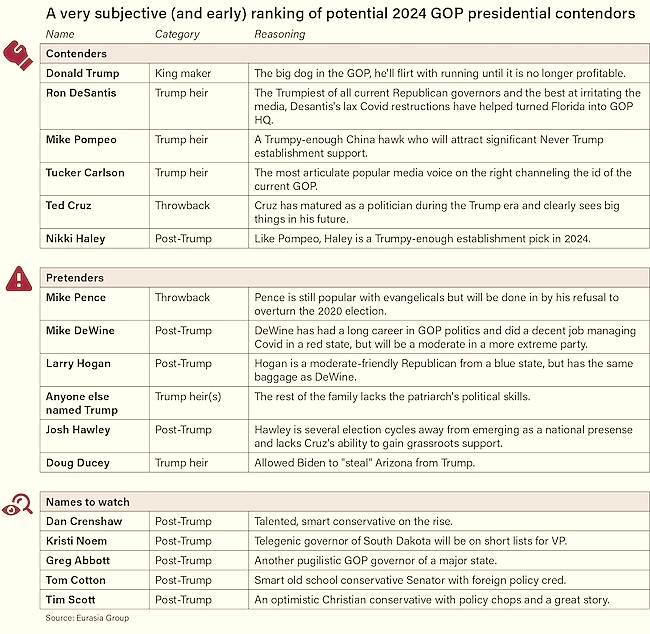