Because most of official Washington goes on recess for nearly the entire month of August (the Senate is scheduled to return to the nation’s capital on September 6 and the House on September 13), the dog days of summer can be a time of reflection for think tank scholars, trade association advocates, and industry groups. With this in mind, I participated on a Conference Board panel, the Government Relations Executive Council, that looked at the future of corporate political activity. The idea was to look beyond this year’s mid-term elections and to discuss the longer-term environment; what it means for the future of corporate lobbying and contributions; and what companies can do to navigate the American political system. Among the key insights that emerged were:

Please feel free to reach out to the Washington office with any questions or comments and have a wonderful Labor Day.

Thought leadership from our consultants, think tanks and trade associations

Eurasia Group Says the Federal Reserve’s Policy Stance Runs the Risk of Cutting Across the White House’s Positive Political Narrative. In contrast to the positive economic information released by White House officials, the Federal Reserve continues to promise to hold interest rates high for an indefinite period, even acknowledging that restoring price stability will likely cause a painful economic slowdown. That gloomy message is at odds with recent good news for President Biden, who has improved his position within the Democratic Party after several policy wins that have elevated Democrats’ prospects for the November midterm elections. The threat of a weakening economy will be a persistent theme throughout the fall and possibly well into presidential primary season next year. The high odds of a recession before the end of 2023 will help define the political narrative. The depth and persistence of any recession will be a key political indicator, and a strong recovery in 2024 could be a boon for the party that ultimately holds political power.

Observatory Group Outlines the Federal Reserve’s Best Case Policy Scenario. The best-case scenario for the current path of monetary policy would be one in which there is evidence of a broad and sharp deceleration in demand-driven components of consumer inflation in August followed by several months of the same, plus the emergence of some slack in the labor market. Taken together, these developments would allow the central bank to recognize—around year-end or early in 2023—a pattern of slowing inflation and assert a belief it would persist. If that pattern of inflation does persist through early next year to the point where monthly core inflation runs closer to 3% than to 4%, and if the Fed sees less excess demand in the labor market, then a policy rate of around 4% or slightly higher would be seen as a place to pause rate hikes. This could happen late Q1 next year at the earliest. If inflation were to continue to recede, that pause could become the end of the rate hike cycle, which is what some analysts also expect to see in the FOMC’s September median policy rate projections. However, if none of the conditions in that best-case have yet to be met or still have not begun to emerge would lead to a higher terminal rate and a longer rate cycle.

“What we’re seeing now is either the beginning or the death knell of extreme MAGA philosophy. It’s not just Trump, it’s the entire philosophy that underpins the—I’m going to say something, it’s like semi-fascism,” President Biden at a fundraiser in my hometown of Rockville, MD.

In 2017—years before the pandemic and during an extended period of low inflation—the U.S. Department of Agriculture (USDA) estimated that the average cost to raise a child from birth through age 17 was $284,594. That estimate assumed an average inflation rate of 2.2% and did not include expenses associated with sending a child to college or supporting them during their transition to adulthood. The Brookings Institution has re-calculated the projected cost of raising a child assuming a 4% inflation rate and found that total average expenditures on a child born in 2015 to a middle-class family with two children would be closer to $310,605.

GRaphs of the Week:

Consumer Confidence Rebounds in August after Falling for Three Straight Months. The Conference Board’s Consumer Confidence Index increased in August. In fact, both consumers’ view of current conditions and their 6-month expectations for business conditions, jobs, and finances improved. Consumer confidence rebounded from three consecutive monthly declines—indicating resilient strength in the economy even as a downturn looms; The Present Situation Index recorded a gain for the first time since March; and The Expectations Index improved from its year low. Meanwhile, purchasing intentions for homes, autos, and major appliances increased after a July pullback, and vacation intentions reached an 8-month high. Looking ahead, August’s improvement in confidence may help support spending, but inflation and additional rate hikes pose risks to economic growth in the short term. Ultimately, The Conference Board forecasts a recession in the U.S. and Europe by the end of 2022, with slowdowns also likely in key economies across the world. 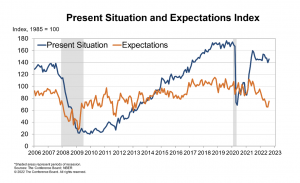