This Saturday will mark the 20th anniversary of the September 11th attacks on the United States. It strikes me that although I’ll never forget exactly where I was when I first heard the news that an American Airlines jetliner had hit the World Trade Center, it is likely that there are now some SCOA employees young enough for which 9/11 is merely an event from history. At the time, the Washington office focused on liaison work with the international financial institutions headquartered in the nation’s capital and the geopolitical research that emanated from the city’s premier universities and preeminent think tanks. 2001 was a simpler time when you could enter the halls of Congress without passing through a metal detector, and the pathway between the White House and Treasury building was open to afternoon joggers. In one day, the area around Lafayette Square transformed from an almost collegiate atmosphere to a space that fell squarely within the White House’s security perimeter. Although the strategic nature of SCOA’s investments in the U.S. has evolved over the past twenty years, September 11, 2001, also marked a turning point in terms of the level of government involvement in our daily lives, both personal and professional. It is for each of these reasons—strategic investment and government action—that the Washington office now includes a full service government affairs function. Beyond providing due diligence geopolitical and macroeconomic research, the Washington office also includes government affairs and lobbying services that assist SCOA offices and subsidiaries navigate the political, legislative, and regulatory waters in which they must sail. While September 11th showed the world how vulnerable the U.S. had become to terrorist attack, September 12 and the days that followed revealed how communities across the country could come together. It was in this spirit that I cofounded a non-profit corporation, the Salute Military Golf Association (SMGA), to bring the game of golf as a form of mental and physical rehabilitation to injured veterans returning from the battlefields of Afghanistan and Iraq. Over the past 15 years, the SMGA has reached over 5000 wounded veterans, purchased more than 2500 custom-fitted club sets, and provided thousands of hours of personal instruction. The SMGA is grateful for the financial support provided by the SCOA Foundation and SCOA employees. Without exaggeration, your generosity has truly been life saving.

Trade Analyst Laura Chasen: Calls to Terminate Section 232 Steel Tariffs, Transform Them to Safeguards. The Coalition of American Metal Manufacturers and Users (CAMMU) has called on President Biden to end the Section 232 steel tariffs. CAMMU notes the domestic steel industry’s capacity-utilization rate is 85%, far above the 80% target used as the basis for imposing tariffs in 2018, and the domestic price of hot-rolled steel has hit a record, up 92% this year. The industry faces a price and supply crisis, which will worsen if the White House’s infrastructure initiative makes its way through Congress. With demand for steel increasing, a failure to return to competitive prices will cause American companies to lose business to foreign competitors who pay far lower prices for steel. The obvious way to increase supply, and lower prices, is for the Biden administration to lift the Section 232 tariffs. While metal users and major business groups have urged an end to the steel and aluminum tariffs, the White House remains under pressure from steel-producing companies and the politically important United Steel Workers union to retain them. President Biden will soon have to decide which path to take; he agreed with the EU to negotiate the removal of tariffs on European steel. A recent EU statement confirmed its readiness to find a WTO-compliant solution before December 1 to restore trade flows and avoid managed trade. The clear suggestions being that the tariffs will be replaced with a quota system, likely in the form of safeguards, and apply to other trading partners as well. Additional details on Section 232 can be obtained from the Washington office.

National Association of Manufacturers (NAM): Third Quarter Outlook Survey. U.S. manufacturing optimism remains strong as the global economy continues its post-pandemic rebound.  Although down from the Q2 survey, a large majority (87.5%) of respondents reported feeling optimistic about their corporate outlook. Among the survey’s highlights: (1) nearly 94% of manufacturers said that higher taxes would be harmful to their businesses; (2) roughly 90% of respondents said that their company would find it more difficult to expand their workforce, invest in new equipment, or expand facilities if the tax burden on income from manufacturing activities increased; (3) nearly 91% said that higher taxes would also make it more difficult to raise employee wages; and (4) the top three challenges facing manufacturers are increased raw material costs (86.4%), attracting and retaining a quality workforce (80.0%), and supply chain challenges (79.8%). SCOA is a NAM member; to receive more information on NAM products and services, contact the Washington, D.C., office.

Observatory Group: What to Make of Senator Manchin’s (D-WV) Call for a “Strategic Pause” in Drafting the Multi-trillion Dollar Budget Reconciliation Bill? The primary takeaway is that his comments do not represent a mortal blow for the reconciliation bill. First, Sen. Manchin clearly left room to support a reconciliation bill, although not as large as the one envisioned by the $3.5 trillion budget outline that Congressional Democrats voted for last month. Second, conventional wisdom has always been that the senator would insist on a smaller bill. Third, Sen. Manchin’s comments will prolong consideration of the bill beyond what Democratic leaders and progressive House Democrats desire. This will give private-sector opponents of the bill more time to lobby against it, potentially complicating chances for passage. Fourth, it raises questions about whether there will be sufficient support in the House to pass the separate “physical” infrastructure bill later this month. Contact the Washington office for the latest details on consideration of both the reconciliation and infrastructure bills.

“Joe, at the end, has always been there. He’s always been with me. I think we can work something out. And I look forward to speaking with him,” 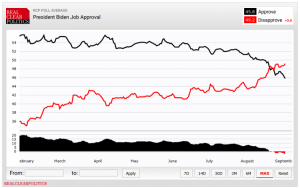