Last weekend I did the unthinkable. Late in a golf match, with my partner out of the hole, having hit his tee shot out of bounds, and my competitors both safely on the green with birdie putts, I hit an easy approach shot into a greenside bunker, short-siding myself, and making par a remote possibility. As I approached my ball, angry at my effort, I tried to stay calm, realized I had been in this position before, and told myself I could manage—I could get “up-and-down” and save par and perhaps the game. We have all been there before, whether in sport or business, facing an unexpected, difficult situation with the match or our version of the sale on the line. Ironically, being given the opportunity to fail yesterday may be the key to succeeding today. Seeing a friend or coworker struggle with an immediate challenge can be gut wrenching, and the urge to step-in, be helpful, and save the day by taking over can be irresistible. Although well intentioned, such action may actually convey the message that the situation is hopeless; the implications being that not only is the hurdle too high to be cleared now, but also that there may never be a way of learning to clear it. Sure, business situations can be dire, and true concerns, from time pressures to competency levels to job stresses to productivity cycles, may all exist. However, stepping in and being “helpful” can have a number of very real unintended consequences. Over time, “saving the day” may lead to dependency, stifle growth, and even promote malicious obedience among employees—the act of doing exactly as told, no more, no less, no matter the outcome. Rather than step in and hit the ball out of the sand for someone, it may be more advisable to offer concern and advice; be available for deep discussion; and/or provide true mentorship. What happened in the match? I hit a terrible bunker shot, left it in the rough, but then miraculously chipped-in for par. My opponents were flustered, they both missed their birdie putts, and my partner and I headed to the next hole with a better chance of winning the overall match. If your office is facing a hazardous public policy issue, reach out to the Washington office. It is our job to assist in navigating the macroeconomic, legislative, and regulatory environments your business faces.

Eurasia Group: President Biden Wants Voters to Focus on the U.S. Being Out of Afghanistan, Not on How the U.S. Left: President Biden’s speech on Afghanistan was intended to shift the national conversation away from how the withdrawal was executed and on to the fact that the war is over. The shift is essential to the administration’s ability to recover from a polling slide that began with rising Covid cases and grew higher during the bungled withdrawal. The White House’s ability to shift the narrative will continue to be limited by the fact that approximately 100-200 American citizens who want to leave are still in the country. The ongoing risk of harm to these Americans will prolong media attention, overshadow accomplishments, and increase the political risk to the president. Although the mismanaged withdrawal is unlikely to be the singular deciding factor for voters, who still focus primarily on domestic issues, it does undermine Democrats’ case for remaining in power. At the very least, it is an unwelcome headwind for Democrats facing a likely loss of their House majority and a tossup in the Senate; the Eurasia Group places the odds of Democrats holding their majorities at 30% and 45%, respectively. Congressional investigations will prolong attention on the negative aspects of the withdrawal, and hinder the White House’s ability to shift public attention to the “war is over” narrative. As a result, Democrats face considerably more pressure to deliver on domestic wins like the infrastructure bill.

American Enterprise Institute (AEI): Federal Reserve Chair Repeats Past Mistakes: Although one can understand Federal Reserve Chairman Powell repeating one policy mistake of the past, it is difficult to understand how he can repeat a series of major policy mistakes. In the 1970s, high inflation suffocated U.S. economic performance and acted as a tax on the most vulnerable Americans. The high inflation was largely created by an overly accommodative monetary policy. Today, seemingly oblivious to the experiences of the past, the Fed has responded to the COVID recession by increasing the money supply at the fastest rate in fifty years. Despite inflation already rising by more than twice the Fed’s 2% target, the central bank maintains that today’s inflation in not a monetary construct, but is caused by supply-chain forces that will resolve themselves. In taking such a position, the Fed appears to be discounting any notion that skyrocketing inflation is due to a combination of the continued pursuit of easy money at the same time the country has implemented its largest peacetime budget stimulus ever. Consensus exists among economists that monetary policy operates with long and variable lags, and any action by the Fed will take an unpredictable amount of time to wind through the economy and achieve measurable results. The present steady rise of inflation and the prospect of even greater budget stimulus in the form of infrastructure and reconciliation bills makes it difficult to understand the Fed’s wait-and-see approach to inflation and its hesitancy to raise interest rates. Past inflationary cycles should have taught the lesson that delay heightens risk and that by the time the Fed acts to curb inflation, it may be too late to prevent inflationary expectations from taking hold. At the same time, the Fed seems to be ignoring the “everything” asset price and credit market bubbles it has created through its aggressive bond buying program. Regardless, the word is that the Fed will continue to buy securities at least until the end of the year at a time when the housing market is booming, the economy is recovering strongly, and inflation is already high. While one may excuse the Fed of not having learned the easy money lesson of the 1970s, it’s difficult to defend their missing the lessons of the bursting of the 2006 housing and credit market bubbles.

“Up until the point of Afghanistan, people were very impressed by the organization, seriousness, and maturity of the Biden presidency and its administration. Whether it fundamentally tarnishes that or not remains to be seen.”

— Rep. Jamie Raskin (D-MD), on the impact of Afghanistan on Biden’s presidency

Social Security is Just 13 Years from Insolvency. Under current law, the combined trust funds will exhaust their reserves by 2034, when today’s 54-year-olds reach full retirement age. Upon insolvency, all beneficiaries face a 22% across-the-board benefit cut. 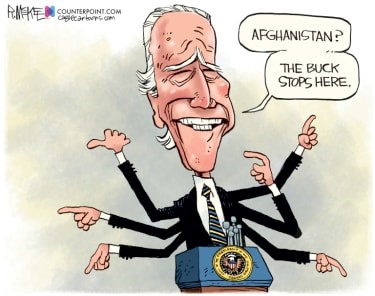