This week I had lunch with a Washington-based government affairs colleague from another Japanese subsidiary. It was great to catch up with him in person for the first time since Covid, and we discussed family, vacations, and the NFL. Knowing that his daughter works for the Democratic National Committee (DNC), and that we both work in public policy, as expected, the discussion ultimately turned to politics and the upcoming elections. We discussed prospects for the House and whether Democrats could hold, or even increase, their majority in the Senate. We agreed that Republicans have the inside track on flipping the House to GOP control, that Republicans would take both the Nevada and Ohio Senate races, but that Democrats would hold Georgia and likely take Pennsylvania. It was then that the question of how to read and how much stock to put into polls came up. The bottom line is that the entire concept of political polling depends on having a set population from which one can take a random sample and get a generally representative snapshot of the electorate. Because the actual population of voters never exists prior to the election, expecting polls to consistently predict an election is statistically difficult and the reason why margins of error are reported. Although pollsters have a treasure trove of information from past elections, over the last few decades it has become progressively more difficult to poll a representative sample of the adult American population—because of the onslaught of telemarketers, people just don’t pick up their phones to answer questions from unknown numbers anymore. However, polls remain the best way to gauge public opinion around elections. To work around the problem of identifying a true representative sample, pollsters have attempted to identify “likely,” “certain,” or “definite voters,” as opposed to merely “registered voters,” and data-analytics companies build complex models to figure out what the future electorate might look like based on a host of data inputs. So, what do the most recent polls show? According to the analysts we’ve spoken with, top issue polling suggests an advantage for Republicans. Polls show inflation is the most important issue for voters, and President Biden’s approval rating on the issue is low, although the effects of any late shifts in the economic environment may be muted due to the growing share of voters who take advantage of early voting. Although Democrats have benefitted from increases in registrations following the Supreme Court’s decision overturning Roe vs. Wade, new voters are less likely to show up on Election Day than voters with a voting history. In addition, more Republicans than Democrats voted in primary elections this year, a signal of enthusiasm that favors the GOP. With polling errors between 3-5% and many races decided by margins even smaller than that, it is extremely difficult to make calls relying solely on model-based forecasts. With Congress on recess until mid-November, most of official Washington’s attention is now focused on the midterm elections. Please feel free to contact the Washington office for detailed election coverage.

The Eurasia Group Believes a Georgia Runoff Could Determine the Fate of the Senate…In Favor of Democrats. Candidate quality remains a serious problem for Republicans in several key Senate races. Stories about Pennsylvania Senate candidate Dr. Mehmet Oz’s history of experimenting on dogs and a revelation that Georgia Senate candidate Herschel Walker paid for an abortion in 2007, despite saying he is pro-life, are the latest stumbles in two races that could determine the balance of power in the upper chamber. Although Republicans have been considered favorites to capture the House and Senate, even if they lose Pennsylvania, this idea was based on the belief that they would win Nevada and Georgia. Although the Nevada race remains tight, Republican Adam Laxalt is likely to win; however, with Walker’s continued problems, Georgia’s incumbent Democratic Senator Raphael Warnock could win the race, especially if neither candidate exceeds the 50% threshold needed to avoid a runoff on December 6. A runoff would delink Walker from popular incumbent Republican Governor Brian Kemp, who is likely to win his re-election. In addition, the House majority will already be known by the December runoff date, which may lower the stakes for Republican voters but increase them for Democrats. Signs to watch for are whether either candidate can pull above 50%, and any additional changes in Walker’s popularity. If he faces Warnock in a head-to-head matchup in December and Oz continues to underperform, the Democrats are likely to hold the Senate.

Politico Sees Republicans Focusing on Oversight and Investigations Should They Capture the House in November. Republicans are openly sharing their plans to investigate the Biden administration, the president’s family, and everything else in between should they manage to win a congressional majority next month. While no one in the Biden administration is itching for subpoenas, as Congressional probes eat up White House staff time and resources, and can delay presidential priorities, there is a growing confidence both inside and outside the White House that Republicans will end up overreaching to the point of hearings boomeranging to Democrats’ political favor. In fact, White House allies say that although it might make the Republican base feel good, investigations are not the kind of thing that resonates with suburban voters, particularly women, in states like Michigan, Wisconsin, and Pennsylvania. High on the GOP’s hit list:

Stratega Says Saudi Disdain for President Biden is at a New High with OPEC+’s Output Cut. The Organization of the Petroleum Exporting Countries (OPEC) and its Russia-led allies reached an agreement to cut oil production by 2 million barrels a day; the production cut is the biggest from the group collectively known as OPEC+ since April 2020, and it signals an intent to keep prices high after enduring seven years of a relatively subdued market. OPEC+’s largely Saudi-enabled decision to cut aggregate production is an explicit move by Crown Prince Muhammad bin Salman (MbS) to put Saudi oil policy on a course directly opposite to U.S. preferences. By doing so, he has clearly prioritized Saudi cooperation with Russia and the United Arab Emirates over what Riyadh sees as its increasingly nebulous, strained, and dysfunctional partnership with the U.S. under the Biden administration. Given that OPEC+’s decision is a potentially damaging blow to the White House’s economic, energy, and foreign policy agendas, the impact of which is prospectively amplified by the U.S. midterm elections on November 8, it is striking how ineffectual the Biden team proved at averting such an outcome.

In and Around DC

Earlier this week, we attended a cocktail reception hosted by one of Washington’s political information services. The party featured a well-know political commentator, often quoted in this blog and who routinely appears on cable news programs. Among his off-the-record comments:

“Look if you hate cops just because they’re cops, the next time you get in trouble, call a crackhead,” Sen. John Kennedy (R-LA) in his latest TV ad.

“My sense of manhood is not connected to whether my vehicle is fueled by gasoline or whether it’s fueled by electricity,” Transportation Secretary Pete Buttigieg.

The U.S. national debt has risen above $31 trillion for the first time. The news comes as the Federal Reserve is raising interest rates to fight the highest inflation in decades. While the Fed cut rates to near zero during the pandemic, it has raised them to more than 3% this year and expects them to reach 4.6% in 2023. The higher rates make the nation’s debt more costly.

According to The Conference Board’s US Salary Increase Budget Survey 2022–2023, U.S. companies are budgeting 4.3% of their total payroll spending on salary increases in 2023. If that figure holds, it will represent the sharpest year-over-year increase since 2001. While budget increases barely exceeded 3% during the 2010s, the current post-pandemic jobs boom and severe labor shortages have pushed wages and salary budgets higher. 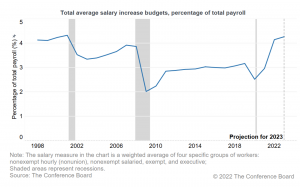