Thought of the Week/What We Heard “Off-the-Record”

We’ve all played the children’s game “telephone,” or “dengon” in Japan. The game starts when a difficult word or phrase is whispered into the ear of the next person in line; this person whispers whatever he/she heard to the next person; and the game continues until the last person in line receives the phrase. The first and last person then repeat aloud the original phrase and the phrase passed down the line. In most cases, the two phrases have no connection to the other at all. News, rumor, gossip, and conspiracy theory often circulate around official Washington in much the same way. I’ve seen news accounts of briefings or hearings I’ve attended that scarcely resemble what I heard discussed in the room. With this in mind, listed below are off-the-record bits of information we heard directly from the source in the cases of prominent Republican and Democratic pollsters, and once-removed from a policy analyst who had just met with a former cabinet secretary and Senator. It is important to note that off-the-record discussions are neither official nor attributable.

Capital Alpha Explains that the White House and Congress have Limited Tools Available in the Short-Term to Address OPEC Cuts and Resolve Rising Gas Prices. Following OPEC’s announcement of a 2 mmb/d cut in oil production, the White House released a statement outlining several tools and authorities available to reduce OPEC’s control over energy prices. However, the challenges facing the Biden administration in implementing any such strategy are great, including the fact that oil markets are interconnected, and any restrictive actions taken by the U.S. domestically will reverberate internationally, raising oil and product prices. In addition, given the supply disruptions associated with the Russian invasion of Ukraine, securing the stability of global energy markets remains a top priority. In fact, it would seem that the White House and Congress need to pursue mechanisms that lift U.S. and global production capacity rather than further limit global oil supply—a position that stands in direct contrast to recent Biden administration policy actions. Complicating matters is the fact that the Strategic Petroleum Reserve (SPR) has fallen to its lowest level since 1984, and requires replenishment rather than further drawdowns. What’s more, any U.S. restrictions on fuel exports or crude oil bans would exacerbate global supply shortages and provide further leverage to OPEC+ and its ability to push prices higher. Furthermore, the NOPEC anti-trust bill and other forms of legal retaliation vs. OPEC+ would inhibit global supply and only add to the risk of retaliation against overseas U.S. investment, infrastructure, and personnel.

Eurasia Group Outlines What’s at Stake in the November Election. With the midterm elections just under a month away, there is a strong chance of a divided government next year with Republicans controlling one or both chambers of Congress. The prospect of divided government is likely to lead to legislative gridlock and additional policymaking from the executive branch, similar to this week’s Labor Department proposal to make it more difficult for companies to classify workers as independent contractors. In the case of the GOP capturing at least one house of Congress, a more Republican legislative branch would be less likely to pass an aggressive fiscal response to recession and more likely to stoke tensions with China over the status of Taiwan. A Republican Congress would also be likely to investigate Biden administration officials, although any impeachments passed in the House would be all but guaranteed to fail in the Senate. Several policy areas that would be unlikely to change significantly include energy policy; the outlook for financial regulation and cryptocurrency; and continued U.S. support for Ukraine in the war against Russia, despite the likelihood of a growing number of anti-war skeptics in Congress next year.

National Association of Manufacturers (NAM): Global Manufacturing Contracted for the First Time Since June 2020. Global manufacturing indexes declined in September, the first contraction since June 2020, with worldwide manufacturing activity weakening significantly in recent months. Manufacturers are grappling with economic and geopolitical uncertainties and lingering supply chain, inflationary, and workforce challenges. Although indexes for future output signal positive expectations for production over the next six months, they are at their weakest readings since May 2020. Looking forward, the World Bank predicts slower global growth next year, expecting the world economy to expand 2.25% in 2023 instead of the 3.0% it forecasted in June. The bank projects that inflation will continue to be a problem worldwide, particularly for food and energy, both of which have been exacerbated by the war in Ukraine. The International Monetary Fund ((MF) also lowered its estimates for global growth, with real worldwide GDP expected at 2.7% in 2023, down from the 3.6% it had forecasted in April, with the largest declines in growth coming from Europe and China. The IMF has warned about inflation, and cautioned that higher interest rates could send the global economy into recession. In response, NAM will continue to advocate for the congressional passage of the Miscellaneous Tariff Bill (MTB) and the creation of a transparent, robust Section 301 tariff exclusion process.

“In short, the worst is yet to come and, for many people, 2023 will feel like a recession,” Pierre-Olivier Gourinchas, IMF Chief Economist, during the World Bank/IMF annual meetings.

“I can no longer remain in today’s Democratic Party that is now under the complete control of an elitist cabal of warmongers driven by cowardly wokeness, who divide us by racializing every issue and stoke anti-white racism, actively work to undermine our God-given freedoms, are hostile to people of faith & spirituality, demonize the police & protect criminals at the expense of law-abiding Americans, believe in open borders, weaponize the national security state to go after political opponents, and above all, drag us ever closer to nuclear war,” Tulsi Gabbard, former Hawaii congresswoman and Democratic presidential candidate.

Next month, President Biden’s eldest granddaughter, Naomi Biden, will be married on the South Lawn of the White House. The executive mansion has a long history of weddings, dating back to the 1800s. The children of James Monroe, John Quincy Adams, John Tyler, Ulysses S. Grant, Woodrow Wilson, Lyndon B. Johnson, Richard Nixon, and George W. Bush have either been married or held wedding receptions at the White House.

September CPI Report Reveals No Reprieve from Inflation. The Conference Board reports that although headline Consumer Price Inflation (CPI) slowed slightly in September, core inflation, which excludes food and energy, continued its rise from a year ago. The persistence of high inflation will continue to yield rapid interest rates increases, and will trigger a recession in the coming months. 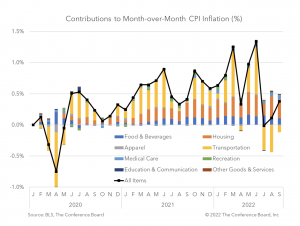