Turn on any cable news network, listen to any talk radio station, attend any think tank briefing, and what you get is wall-to-wall coverage of this year’s midterm election horse race. While we’ve all heard what the break down might be between Republicans and Democrats in House, Senate, and even Gubernatorial races, little, if any, attention has been devoted to the potential consequences of the election’s outcome. An almost certain divided government, with control of at least the House and possibly the Senate changing parties, will confer on Republicans legislative branch powers that they have not held in years. At the same time, no one should expect the White House to stand idly by. If his first year in office is any indication, President Biden will not wait to use executive authority in ways that carry a wide impact. In fact, the president has already issued more than 100 executive orders since taking office, including more in his first year than any president since Gerald Ford. Control of Congress means oversight and investigative control, the power of the purse, and in the case of a Senate change, power over confirmations. A GOP takeover, at the very least, will mean investigations into the border, Hunter Biden, and the withdrawal from Afghanistan. Republicans will leverage the power of the purse, including a possible debt-ceiling standoff, to garner concessions on energy, immigration, and government spending. And if the Senate also flips, judicial confirmations will halt, and turnover at the agency level can be expected with the prospect of many bureaucrats serving in “acting” positions. While Congress utilizes its legislative branch authority, the White House will counter with administrative action and executive orders. Once such order might be an emergency declaration on climate change, which would allow the president to (1) halt crude oil exports; (2) limit oil and gas drilling in federal waters; and (3) direct agencies to boost renewable-energy sources. President Biden could also invoke the Defense Production Act in an effort to boost oil-refining capacity, and executive orders could be used to extend the Covid Public Health Emergency, which is set to expire in January. Under pressure from abortion rights activists, the White House may double down on reproductive healthcare access, including the declaration of a public health emergency, which could leave employers caught between complying with conflicting federal and state regulations. In addition, a greater number of businesses could see their compensation plans tied to environmental, social and governance (ESG) goals if the SEC finalizes its Climate Disclosure Rule. And after a Labor Department proposal earlier this month, the White House faces growing pressure to follow through with executive action on campaign pledges to force a range of companies to classify workers as employees rather than independent contractors. While a GOP takeover of at least one chamber of Congress will launch legislative actions likely to hit a wide range of industries, President Biden will counter with executive action, possibly leaving it to the courts to sort out conflicting policy directions. Companies will need to be prepared for the new landscape that could have them attempting to satisfy competing demands from opposite ends of Pennsylvania Avenue.

Eurasia Group and Karl Rove Say the Current State of the Overall Environment Favors Republicans. Republicans are gaining momentum as the broad political environment shifts back to basics. While support for Democrats sharply increased in the wake of the Dobbs Supreme Court decision in June and the FBI raid of Mar a Lago in August, the effect of these events has subsided, and the country is now focused on inflation, the economy, crime, and the border. President Biden’s approval is underwater on these issues, and his overall approval rating has stagnated near 43%. Additionally, just 26% of Americans think the country is going in the right direction, compared to 67% who believe it is on the wrong track. In terms of which party voters trust to handle their own most important issue—48% trust Republicans, while only 37% trust Democrats, the largest GOP advantage since 1946. As a result, Karl Rove believes Republicans will win the midterms. With historical advantages and the broader environment favoring Republicans, Rove argues that Democrats are harming their chances with unconvincing closing arguments, pointing specifically to President Biden’s statement that one of his priorities if Democrats win will be re-codifying Roe v Wade as law. As a campaign tactic, Rove is also critical of Democrat’s touting of legislative achievements like the infrastructure bill, CHIPS Act, Inflation Reduction Act (IRA), and American Rescue Plan Act (ARPA). Rove sees these bills as having largely contributed to inflation without improving life for Americans in the short term. Although they may help Americans in the longer term, Rove believes Democrats have not explained the benefits well enough to improve their electoral chances.

Politico Believes a Fight Over Worker Assistance Could Sink a Lame Duck Trade Bill. Lawmakers are laying down red lines for trade-related legislation, setting the scene for a standoff that threatens the renewal of two key trade programs in an upcoming lame duck session of Congress. Democrats will reject a comprehensive trade package that does not include the revival of Trade Adjustment Assistance (TAA), which provides job training to workers displaced by trade. Republicans counter that TAA will only pass as long as it comes with a renewal of Trade Promotion Authority (TPA), legislation that would send a signal to the Biden administration to pursue market-opening trade deals. Hanging in the balance is renewal of two trade programs that hold bipartisan support: the Generalized System of Preferences (GSP) and the Miscellaneous Tariff Bill (MTB)—SCOA’s Washington office has lobbied in direct support of the MTB. Guaranteeing the extension of TAA is necessary to secure support from the Democratic caucus for the renewal of the two trade programs, particularly in the Senate where Democrats hold a slim majority. However, key Republicans say they will not support TAA renewal without any new trade negotiations. Although GSP and MTB have wide bipartisan support, and could be taken up during the next congressional session, Democrats see this as their last shot to renew TAA if either chamber changes hands in November.

The Observatory Group Previews the November Federal Open Market Committee Meeting. The FOMC will raise rates by 75 bp next week. Although there is a great deal of consequential data to come out before the December FOMC meeting, a 50 bp hike in December is a comfortable baseline for now, given the cumulative tightening in the pipeline with any November move. Chairman Powell has only a narrow safe space to discuss the policy outlook in his post-meeting press conference next week, and he is likely to acknowledge that the Fed’s policy stance has moved even further into restrictive territory. However, with core inflation not yet slowing and important inflation data still to come before the mid-December meeting, he will not be able to say that the risks are balanced, and thus suggest that the FOMC is near the top of its tightening cycle. Regardless, the cumulative tightening in the pipeline after the November move will contribute to smaller rate hikes and an eventual end to the tightening. Since core demand-driven inflation has not begun to slow, there remains some upside risk to rates beyond the FOMC’s September median rate outlook, which showed a policy rate topping out at 4.5% to 4.75% early next year.

During a virtual briefing to Eurasia Group clients, Karl Rove, Deputy Chief of Staff and Senior Advisor to President George W. Bush, offered a number of candid comments on the Biden presidency to date. Among the more interesting:

“I don’t want the federal government involved with that at all…I want women, doctors, local political leaders letting the democracy that always allowed our nation to thrive, to put the best ideas forward so states can decide for themselves,” Republican Pennsylvania Senate candidate Dr. Mehmet Oz on the prospect of federal abortion restrictions.

“I absolutely support fracking. I believe that we need independence with energy and I believe I have walked that line my entire career,” Democratic Pennsylvania Senate candidate John Fetterman reversing his position on fracking just weeks before the midterm elections.

Federal lobbyists raked in more than $3 billion through the third quarter of 2022, a record haul in what will likely be the most expensive year for federal lobbying to date. Lobbying groups are just $743 million away from the record $3.8 billion spent on federal lobbying in 2021.

Inflation Varies by Region. The U.S. Bureau of Labor Statistics recently reported that the consumer price index rose 8.2% in September compared with the year before, but that national average hides the fact that prices are rising faster and higher in certain parts of the nation. Breaking the country into the same sub-regions used by the Census Bureau, the rate of price increases that consumers pay for goods ranges from 7.2% in the Northeast to 9.6% in the Mountain States. 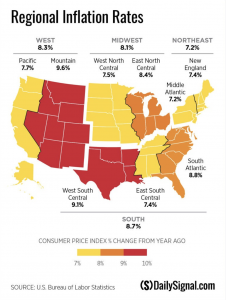