With just a few days to go before Election Day, you’ll still see polls that list a significant number of voters as “Undecided.” Following a months-long campaign, candidate debates, and wall-to-wall commercials, you can’t be blamed for asking yourself, “How this is even possible; who are these people?” Well, my wife is one. As a Creative Director for a large company, her focus is on TV, radio, social, and print advertising for the suite of products and services her firm provides on a national scale. To say she’s not into politics is an understatement, and she doesn’t just walk, but runs, away from even casual political discussions. Although my wife will vote (our polling place is literally just across the street), at this point in a campaign, undecided voters are the least likely to complete a ballot. To address this issue a growing number of companies have implemented Get Out the Vote, or GOTV, programs. While companies once looked at elections with skepticism because getting involved often meant alienating stakeholders, this is no longer the case today. In fact, research suggests that Americans trust their employers and top executives as reliable sources of information, including on the issue of elections. A consultant to the Washington office has put out a guide for corporations explaining how companies can launch successful, nonpartisan, GOTV efforts that help employees participate in an election. The trick is in finding a sweet spot by being pro-democracy and pro-voter, without being partisan. Employee-focused GOTV programs use a variety of methods to register employees to vote, educate them about the issues, and get them to the polls. Successful programs focus on participation over politics with the goal being to strengthen democracy, not advocate for a particular candidate or party. Companies with GOTV programs report that even small efforts are meaningful, raising participation levels to as high as 88% of employees visiting the polls. Almost all of firms with GOTV efforts rely on existing full-time staff to execute their programs. More companies now believe that civic engagement programs like GOTV end up benefitting their brand in a number of ways, including raising awareness, strengthening relationships with employees and shareholders, and elevating the company with elected officials. There’s no question that voting has increased dramatically in recent years. The 2020 presidential race saw the highest turnout of the century; according to the Census Bureau, 66.8% of the voting-age population cast a ballot. Midterm elections, which generally attract less interest than presidential years, are also showing bigger numbers. Turnout reached 53% in 2018, the highest for a midterm in four decades. Because this year’s election will decide which party controls the House and Senate, legislatures in 46 states, and 36 gubernatorial seats, the outcome will impact nearly every company, regardless of who wins. With so much at stake, it’s no wonder why GOTV programs are becoming more prevalent. For those interested in turnout, the Census Bureau identified a few trends from the 2020 election:

Capital Alpha Sees Call for a Windfall Profits Tax Facing an Uphill Climb in Congress. Realistic prospects are below 20% for a windfall profits tax on oil and gas companies any time in the near future. U.S. oil majors are an important part of a very complex global commodity market around which petroleum products are priced. In fact, analysts believe underinvestment remains a more significant long-term problem for upstream oil and gas, and increased taxes would only further restrict supply. A GOP win of the House and/or Senate in the midterm election could marginally help production prospects for U.S. oil and gas.

The Conference Board Explains What the Fed’s Decision Means for the U.S. Economy. Although the Federal Reserve’s actions were widely anticipated, its tone about the future shifted somewhat, saying it will “take into account the cumulative tightening in monetary policy, the lags with which monetary policy affects economic activity and inflation, and economic and financial developments.” The new language suggests that this may be the last 75 basis point rate increase this tightening cycle. In fact, Chair Powell said that a downward shift to a 50 basis point hike will be discussed at the December meeting. At the same time, Powell said that the terminal rate this tightening cycle is likely to be higher than the one forecast in September. Rates are now expected to rise to 4.75-5.00, with a midpoint of 4.875, in March 2023. Although the Fed Funds rate has risen by a total of 375 basis points since tightening started in March 2022, do not expect the Fed to lower rates next year. Interest rates throughout the economy have risen rapidly, and tighter policy has begun to cool the overall economy. While the labor market remains exceptionally tight, other parts of the economy have begun to slow, such as consumption and business fixed investment, while others have begun to contract, like residential investment. Once the full impact of this year’s hikes weigh on businesses and consumers, economic activity will slow further, tipping the economy into a broad, but shallow, contraction. This recession should begin around the end of 2022 and last for three quarters.

Eurasia Group Believes a Republican Congress Will Take a More Confrontational Stance Toward China. Next year could be an extremely tense one for U.S.-China relations, with several hawkish Republicans expected to take leadership positions in the House, pushing Congress toward a more confrontational stance with China. Assuming they win control of the House in the midterm elections (a 90% probability), Republicans will prioritize legislation seeking to curb Chinese competitiveness, addressing several key issues, including Taiwan, supply chain security, capital flows, data privacy, and resource extraction. Given the aggressiveness with which the Biden administration has sought to undermine China’s technological capabilities, there could be bipartisan interest in another omnibus China package year that includes elements of the GOP agenda.

Both Parties are Flirting with Reconciliation Says the Eurasia Group. Senate rules require a supermajority of 60 votes to pass any legislation, with several exceptions including one for bills that purely address the budget. Both parties consider using this short cut, known as reconciliation, when they know legislation they want to pass will not have the support of the minority party. At present, both parties are considering it. House Democrats are floating reconciliation to increase the debt limit in the lame duck session of Congress this year before they hand power over to the GOP, although it is extremely unlikely they will have the time or the votes for this to succeed. House Republicans see reconciliation as an option to use next year to pass a package of spending cuts, which would only be an option if Republicans also control the Senate. Expect Republicans to go through this exercise even if the face of a certain veto by President Biden.

The Washington office recently participated in an off-the-record briefing featuring comments by a Republican Congressman in a safe district. In the event Republicans win at least the House, he confirmed that the GOP would demand “some kind of reforms” before signing off on a debt-ceiling increase. It is the party’s position that the ceiling cannot just be raised ad infinitum. With the authorization of $6 trillion dollars over the past 18 months, Republicans in Congress view the federal debt as becoming unsustainable. For comparison, they point out that annual federal discretionary spending is just $1.6 trillion, and that the interest on the debt is now approaching the size of the Defense budget. He warned attendees to expect “high drama” similar to 2012-2013, which led to sequestration.

“The inflation picture has become more and more challenging over the course of this year, without question… To the extent rates have to go higher and stay higher for longer, it becomes harder to see the path [that avoids recession],” Fed Chairman Powell.

“It’s time for these companies to stop war profiteering, meet their responsibilities to this country, and give the American people a break and still do very well,” President Biden.

“What the heck is a pronoun?…These pronouns gonna get our men and women in the service killed,” Senate candidate Herschel Walker (R) on the campaign trail.

According to the U.S. Elections Project, with just five days left until Election Day, 30,555,755 votes have already been cast in this year’s mid-term elections.

Debt-Limit Brinksmanship Coming. Although Washington and Wall Street are used to partisan wrangling over the federal debt limit, the battle looming in 2023 carries major economic risks at a time when the country may have slumped into a recession. Negotiations will be shaped by the outcome of the midterm election, and if Republicans assume control of at least the House, some GOP lawmakers have vowed to demand spending cuts as the price for increasing the statutory debt ceiling. 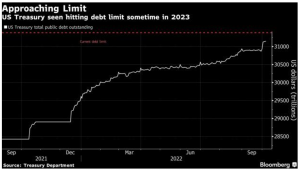