In the comedy classic, Caddyshack, there is a scene where Judge Smails (Ted Knight) finds out that Ty Webb (Chevy Chase) does not keep score on the golf course. The Judge asks Ty, “Well, how do you measure yourself with other golfers?” Webb’s deadpan response is, “By height.” Although there may be a certain degree of futility in comparing oneself to other golfers, the same cannot be said of corporations, which constantly measure themselves against peers and competitors. A recent Global Business Alliance (GBA) survey benchmarked its’ members government relations functions, activities, strategies, and processes, and the results were enlightening (SCOA is a member of the GBA, and GBA membership is exclusive to foreign subsidiaries). A full 86% of GBA members have a U.S. federal government relations function, 65% are involved in state government affairs, and 84% have a physical office in Washington, D.C., up more than 20% since 2017. Even in a down economy, survey respondents reported stable or increasing government affairs budgets, with the median budget coming in at $1.0 million – $2.5 million; 45% reported budgets in excess of $2.5 million. With increases in budget, come increases in staff—46% reported staff increases, 41% reported no change, and only 13% reported a decrease. In both the 2017 and 2022 surveys, respondents reported a median of 4-10 employees working exclusively on federal government relations; however, this year’s survey saw an increase in companies with more than 10 employees—24% in 2022 compared with just 10% in 2017. As budgets and staffing increased, GBA members also reported increases in their budgets for consultants and trade associations. While 49% reported increasing budgets for federal consultants, the median budget for trade associations rose to $750,000 – $1.5 million. The increased budgets are spent on lobbying a variety of government officials, including Congress (81%); executive branch political appointees (78%);  federal agencies (77%); coalitions and advocacy groups (77%); state executive branches, legislatures, and agencies (68%); international organizations and foreign governments (52%);  local governments (50%); academics and third party organizations (42%); economic developers (28%); and the media (17%). With the most lobbied issues being taxes (63%), transportation (50%), manufacturing (47%), safety/health/environment (39%), energy (38%), technology (37%), cybersecurity (32%), education/workforce (30%), labor force mobility/immigration/unions (27%), legal/intellectual property (26%), government procurement (20%), healthcare (20%), jobs/wages (14%), and financial services (12%). To better leverage government affairs actions, fifty-seven percent of GBA members reported that their companies are now involved in political giving at the federal level—37 make PAC contributions to candidates, 23 have executives who make personal contributions, and 23 make PAC contributions to leadership PACs. The median politically active GBA member has a PAC that raises in the range of $100,000 – $500,000 per year. Going forward, the most pressing challenges GBA members expect to face are a difficult political environment (61%), while a lack of resources (staff, time, and financial) took the second, third and fourth slots. The takeaway from all of this is that foreign subsidiaries overwhelmingly see federal, and state, government involvement increasingly integral to their business strategies.

Eurasia Group Notes that Court proceedings on DACA are Leading to Worries about Labor Market Goals. A group of large employers, including Microsoft, Apple, and Meta, has started a pressure campaign on Congress to act to preserve the legal status of roughly 700,000 young people living and working in the U.S. under the 2012 Deferred Action for Childhood Arrivals (DACA) policy. Although the 5th Circuit Court in 2021 ruled the DACA program unconstitutional, a partial stay has allowed “Dreamers” to stay in the country while a new DACA policy is under review. However, Congress is unlikely to pass any immigration bill during the lame-duck session, as they already have to contend with too many other must-pass pieces of legislation, including the National Defense Authorization Act (NDAA). Even if Congress did have the bandwidth, it is unlikely that the two major political parties could find a compromise over border security that would be acceptable to both sides. In fact, legislation is even less likely to pass when Republicans take control of Congress in January, leaving Dreamers in limbo.  Congressional staffers predict that Dreamers will most likely begin to lose their work authorization and security from deportation sometime early next year. Republicans, who are expected to increase their numbers in Congress in November’s midterm elections, largely oppose protecting Dreamers unless Democrats make significant concessions to beef up border security and turn away asylum-seekers, which they are loathe to do.

Global Policy Group Reports that Early Voting has Started Strong. Election Day is less than three weeks away, but Americans have already cast ballots in many states. The University of Florida’s U.S. Elections Project reports that over two million people have already voted in this year’s midterm elections, either through mail-in ballots or early in-person voting, which puts early voting well ahead of most previous midterm elections. In states that record voters’ party registration, 52.3% of early voters thus far have been Democrats, while 31.1% have been Republicans. Early voting has been growing for decades, and the share of votes cast early, either in-person or through mail-in ballots, rose from approximately 20% in 2006 to 40% in 2018. With just more than two weeks to go before Election Day, expectations are that turnout will equal or exceed the turnout of the 2018 midterm election, when 50% of eligible voters cast ballots—the largest share for a midterm election since 1914. Turnout in midterm elections tends to be significantly less than in presidential elections, although a recent survey found that 67% of voters say they “definitely will vote” in November. While that figure seems unlikely, it does appear likely that turnout at the polls this year will be very strong, with control of the Senate, House, and many statehouses and governorships at stake.

Observatory Group Explains How the Federal Reserve Looks at Financial Market Conditions. The Federal Reserve appreciates that the first genuine anti-inflation fight in 40 years may well reveal vulnerabilities in financial markets that were unlikely to emerge in a low-rate environment. However, the Fed has never been capable of anticipating specific financial market turmoil and acting preemptively to prevent it. Although the central bank might like to be preemptive, it cannot and will always be left to react afterwards. At this stage of the policy cycle, before broad demand-driven inflation has decelerated consistently, the Fed is likely to continue to raise rates, and is actually at its least sensitive to the costs of bringing inflation down, which only reinforces the existing bias against preemptive action in response to financial market turbulence. Together, these factors create a great deal of risk for financial markets, making the Fed both more likely to trigger a problem and less likely to respond on a timely basis. Although the Fed understands this, until inflation begins to recede, recognizing the risk does not make it more likely for the central bank to consider a change in its policy guidance, let alone end rate hikes. The full text of the Observatory Group’s report is available from the Washington office.

This week, we were told that the reason elections are so difficult to predict, and polls may not reflect voter sentiment, is due almost entirely to something called: “Differential Non-Response Bias.” This is a fancy way of saying that most people have smart phones, most landline phones have caller ID, and people do not answer calls from those they do not know. As a result, conducting accurate surveys is increasingly challenging to accomplish.

“Democrats can be [buzzkills], right? Sometimes people just don’t want to feel as if they are walking on eggshells…and that all of us at any given moment can say things the wrong way, make mistakes,” former President Obama on Democrats’ messaging in the midterms.

“There might be somebody else I’d prefer more,” former Vice President Pence on whether he would support former President Trump in the 2024 presidential election.

The Secret Service’s code name for the U.S. Capitol is the “Punchbowl,” and the White House is called the “Castle.” President Biden re-claimed the same code name he used while serving as vice president, “Celtic;” and First Lady Jill Biden also re-claimed her same name, “Capri.”

CEO Confidence Deteriorated Heading into Q4. The Conference Board’s measure of CEO Confidence fell deeper into negative territory to start Q4, to lows not seen since the depths of the Great Recession. A total of 136 CEOs participated in the survey, which asked them to describe the economic conditions they expect to face over the next 12-18 months; an overwhelming majority—98%—said they were preparing for a U.S. recession. Only 5% reported that business conditions are better today than they were six months ago, and the same proportion—just 5%—expected conditions to improve over the next six months. On the brighter side, 86% said they expect to maintain or increase capital spending over the next 12 months; 44% still plan on expanding their workforces; and just 16% expect a net reduction in staff. 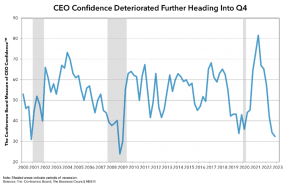