A friend of mine called me this week to get my take on the reconciliation and infrastructure bills making their way through Congress. He’s a small businessman who owns and operates more than 20 fitness centers across the state of Maryland, and his primary concern is over how Employee Retention Credits (ERCs) will be treated in the bills. As you can imagine, the past year and a half have been extremely challenging for his business, and the ERCs provided some degree of financial support. The issue he faces is while previous Covid relief legislation extended the credits through the fourth quarter of this year, the infrastructure bill inadvertently ends them after the third quarter. However, there has been discussion among lawmakers about rectifying the disconnect in the reconciliation bill. Although the ERCs are his immediate concern, and their eventual treatment will mean hundreds of thousands of dollars to his business, his longer-term concern is the breakdown in the legislative process. “This is no way to regulate business,” he told me before asking if there is a better way. He’s right, of course, the use of the reconciliation process is no way to move strictly partisan priorities that have major impacts on people’s lives, whether they be large tax cuts or massive social spending programs. It’s hard to forget Speaker Pelosi’s famous line during the reconciliation debate over Obamacare that “we have to pass the bill so you can find out what’s in it,” and her comment this year about the Build Back Better bill that “whether they know it or not, they overwhelmingly support it.” Both lines speak to the less than opaque nature in which reconciliation bills are crafted. While a colleague referred to this year’s debate within the Democratic Party over the reconciliation process as akin to negotiating between his 5 year old daughter and 16 year old teenager about what movie to see, what Democrats seem to be doing is throwing Bernie Sanders’ pasta to see what sticks to Sen. Manchin’s and Sen. Sinema’s refrigerators. As originally conceived, reconciliation was intended for strictly fiscal measures that kept the government operating, but in recent years, to avoid a Senate filibuster, it has been used more “creatively” to pass measures that stretch its original boundaries. The solution to the breakdown is simply to return to regular order. Regular order is the old-fashioned way of doing things—proposing a bill, assigning it to committee, holding public hearings, marking up the bill to consider/debate amendments, then sending the bill to the full House/Senate for a vote. More than that, regular order refers to the procedures that have governed Congress for generations, and it consists of rules and precedents that have been followed or legislation both big and small. Regular order is not just a process, it is also a state of mind that implies at least a presumption of bipartisanship. While the tradition has been lost in recent years, and increasingly contorted machinations have been used to circumvent it, a return to regular order is the answer to my friend’s question. Regular order leads to compromise, buy-in, the consideration of costs and benefits, and the identification of unintended consequences. Real leadership and political courage would be needed to return to regular order, but it is what the country deserves.

Trade Analyst Laura Chasen: Is Rahm on his Way to Tokyo? U.S. Ambassador-designate to Japan Rahm Emanuel had his confirmation hearing before the Senate Foreign Relations Committee last week.   Although there is no indication that his confirmation is in jeopardy, he is opposed by much of the left-wing of the Democratic Party, including many members of the House who have become more vocal in calling for the Senate to reject the nomination. It remains likely that Emanuel will be confirmed.  Most members of Congress, and the Japanese, want the position filled, and want someone who is close to President Biden and will comfortably carry out his policies, especially his push to work closely with Japan to counter China strategically and technologically. While no Democratic senator has come out publicly against his appointment, any Democratic defections would be made up by his having the support of most (or all) Senate Republicans, including Sen. Hagerty (R-TN), the last U.S. ambassador to Japan. At his hearing, Emanuel stressed the importance of the U.S.-Japan relationship; showed awareness of the strong sentiment in Washington that the U.S. should work closely with Japan on the China issue; and welcomed the notion that Prime Minister Kishida may seek to raise Japan’s defense budget by doubling spending to 2% of GDP. In terms of personal connections to the White House, Emanuel is close to President Biden and trusted by him; he worked with then Vice President Biden during the Obama administration; and strongly supported candidate Biden against leftist criticism during the presidential campaign. Emanuel is opposed by his party’s left because he is a moderate who, during his three terms in Congress and his positions as top adviser to Presidents Clinton and Obama, did not promote leftist policies and was seen as corporate-friendly. In addition, as mayor of Chicago, his policies on public schools and labor were at odds with the left. While Emanuel has little specific background or experience in Asia, he clearly prepped hard for his confirmation hearing and is expected to be up-to-speed if/when he arrives in Tokyo. It is not known when the Foreign Relations Committee will vote on his nomination, nor when the full Senate will vote to confirm him.

Eurasia Group: Framework Roll-Out Announces Not Much has Changed. President Biden rolled out a framework “deal” this morning, after delaying his trip to Rome to stay in Washington for the announcement; the framework is still a long way from a final deal, and it does not change the prevailing view that a bill will not pass until December, at the earliest. President Biden’s involvement is a risk, since his trip to Capitol Hill is unlikely to change any minds. However, the White House did not want to leave for COP26 with nothing to show, and a framework agreement is better than open-ended negotiations. The best-case scenario for Democrats is that the framework satisfies progressives enough that they let the bipartisan infrastructure bill go up for a vote in the House by next week, even without a draft reconciliation bill or Senate agreement. Because progressives have started to frame the infrastructure bill as both anti-climate and drafted by oil lobbyists, both bills are currently at risk.

Economist Intelligence Unit’s (EIU) Risk Outlook 2022. While the EIU expects the post pandemic recovery to continue in 2022, with global GDP expanding by 4.1%, the rebound will mask great variations in the pace of recovery across regions. In fact, a host of scenarios could derail the recovery and have negative effects on global business operations. The EIU’s top ten global risk scenarios are:

“We are just missing two things: What exactly is going to be in the bill and how we’re going to pay for it? Other than that, we are good to go.”

President Grant was given a speeding ticket for going too fast in his horse-drawn carriage down M Street in NW Washington. The president was driving himself, and the fine was $5.

U.S. Posts Weakest Growth of Pandemic Recovery: U.S. economic growth slowed more than expected in the 3rd quarter to its weakest pace of the pandemic recovery. Knotted supply chains and a surge in Covid cases checked spending and investment, and GDP expanded at just a 2% rate following the 6.7% pace in the 2nd quarter. 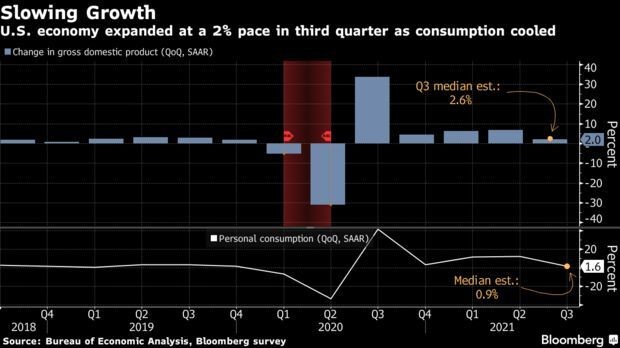