When was the last time you sat down inside a McDonalds; went to the mall to shop; or wrote a series of checks to pay your monthly bills? I get it; we all use the drive-through or delivery apps, Amazon, and online banking. We live in a society of convenience—the convenience to eat on the go, to skip the hunt for a parking spot, to avoid stuffing an envelope and finding a stamp. Truth be told, I even voted by mail this year, way back sometime in October. I did so simply because a ballot was sent to me, and it was easier than visiting my precinct on Election Day. I’m not alone; over the past decade, fewer and fewer ballots are cast at polling places on the Tuesday after the first Monday in November during election years. It is estimated that more than 40 million people used vote by mail and other forms of early voting this year. Proponents tell us that mail-in voting increases voter participation, reduces the cost of recruiting and training poll workers, and eases the task of setting up suitable polling places. They say that documented cases of mail-ballot fraud are rare and there is no evidence to suggest that it favors one party over another. While acknowledging that there are things that can go wrong with mailed balloting, the major problem seems to be the time delays in tabulating results, which does raise certain concerns about voter impersonation, coercion, and fraud. Still, voting by mail proved wholly unsatisfying to me, and it had nothing to do with the outcome of the races. I’m old enough to remember what it was like to pull the lever and have the curtain close behind you to vote. In my quest for convenience, I missed out on the shared experience of Election Day. No question, the convenience of mail-in voting worked as designed; it eliminated all of the minor challenges—driving, parking, standing in line, and completing a ballot—I would have faced, but it left me asking whether convenience can be counter-productive by eliminating the minor irritations that help give meaning to life. Although it may sound corny, shared experiences are valuable, and the shared experience of voting on Election Day goes to the heart of what it means to be an American. Voting and the optics of elections matter as they highlight the values of individual dignity, political equality, and large-scale collective action. Elections are also significant in terms of being time-bound, occurring at a defined political moment, and in terms of being attention grabbing. At the same time, elections recur regularly, creating a rhythm to political life in which the mundane business of politics is punctuated by an extraordinary moment of mass participation. The ritual of voting by congregating at a local polling place, reinforces the importance of the occasion for those who participate in it and witness it. While your single vote is unlikely to tip the outcome of an election, that’s kind of the point. Democracy is something we do with others. When people go to the polls en masse, publicly participating in the same way in a common experience of civic engagement, they demonstrate their willingness to contribute on equal terms to the democratic process. You may be inclined to dismiss the value of these images and expressions as abstract, immaterial, and quaint, and you might be right. It may well be true that the increased accessibility that convenience voting affords is worth the tradeoff in terms of an altered voting experience. However, I believe, after feeling its loss that the shared social experiences of voting may hold one key to reducing the hatred that seems to lurk behind today’s extreme political polarization. The shared experience of voting may in itself directly address the threats to democracy that were such a major topic of discussion before the election.

Eurasia Group Says Democrats Outperformed Expectations. As results continue to come in, control of both houses hangs in the balance. While it appears highly likely that Republicans will command a narrow majority in the House of Representatives, control of the Senate will depend on three races still undecided: Nevada, Arizona, and Georgia. Results in the first two states should be known by the end of the week, but Georgia will need run-off election on December 6. Democrats need to win two of these seats to retain control of the Senate. Among the preliminary lessons from the election: (1) Republicans clearly underperformed the fundamentals of a first midterm election with an unpopular president of the other party. This is likely due to weak Republican candidates, stronger than normal Democratic enthusiasm, and Independents breaking for Democrats, against expectations. (2) With a Republican house, there will be limited scope for material bipartisan legislation beyond budget bills and a few pieces of must pass legislation for the remainder of the Biden term. Notably, regardless of the Senate makeup, the No Oil Producing and Exporting Cartels (NOPEC) Act and permitting reform are not likely to pass, and the debt limit will only become an issue at the 11th hour. (3) U.S.-China tensions will worsen, potentially affecting American trade relations with other Indo-Pacific countries. (4) The U.S. will not diminish its support for Ukraine even if it increases oversight of its aid. (5) Implementation of the Inflation Reduction Act will heighten pressure on trading relationships with the EU, Japan, and South Korea. (6) Rising interest rates and high inflation will make fiscal debates more divisive and make it harder for Congress to respond fiscally to a downturn. Although the Fed will remain insulated from politics, criticism will increase particularly if inflation proves sticky or the downturn is sharper than predicted.

What the Observatory Group Thinks about the 2022 Elections So Far. Although Republicans are likely to win a House majority, Democrats defied expectations and are likely to hold their net losses to 10 to 15 seats. While this is still enough to give the GOP a slim majority, it is not the 30+ seat pickup for the GOP that some analysts predicted. While the results of all the House races, and the final margin for Republicans, may not be known until early next week, the smaller margin will have implications for GOP House majority leaders. In order for a narrow House majority to govern, it will need to be disciplined and unified. However, all indications are that the incoming House Republican majority will be factious and disorderly, and present massive challenges, almost on a daily basis, for its leadership. In turn, this will complicate the ability of Republican leaders to reach consensus within their caucus on key legislative priorities. Which party will control the Senate is still unclear—one view is that the GOP has better than even odds of winning both Arizona and Nevada, which would secure a Republican Senate majority regardless of the outcome of a Georgia runoff election.

Prime Policy Group’s Initial Takeaways from the 2022 Midterm Elections. Divided government is expected to return to Washington, with the GOP likely to claim a razor-thin margin in the House. While this is cause for Republicans to rejoice, they fell far short of the expectations they set for themselves, and governing may prove challenging with so few votes to lose. Democrats avoided the historic midterm trend of large congressional losses for the party controlling the White House, as Republicans were unable to capitalize on a relatively unpopular president and high inflation. The quality of candidates and campaigns certainly mattered. Flawed GOP Senate nominees in New Hampshire and Pennsylvania won contested primaries against establishment-backed candidates but were rejected by general election voters. A similar outcome may be in store for Arizona. The oft-touted enthusiasm gap between Democratic and Republican voters was a mirage. In the closing days of the race, Democratic intensity picked up and the issues of abortion rights proved to be a motivating factor; on the flip side, GOP messaging on inflation, crime, and immigration did not deliver enough Republicans to the polls. Republicans, who saw lower-than-expected turnout on Election Day, have yet to embrace early and mail-in voting in many states, to their detriment. Younger voters turned out in record numbers, providing a significant advantage to Democrats. What’s more, Democrats beat back several high-profile GOP challenges in governors’ races, including in Michigan, New York, and Wisconsin; Democrats also flipped two states (Maryland and Massachusetts) from red to blue and may also pick up Arizona. Democrats won abortion-related ballot measures in each of the five states where it was on the ballot, underscoring the priority swing voters placed on the issue.

Answering a question about when the political pendulum will eventually swing back to the middle, Punchbowl News Founder and CEO Anna Palmer said, “It’s still going. The energy of both parties is on the far right and far left.”

“Our intention is to run again. That’s been our intention, regardless of what the outcome of this election was,” President Biden to reporters one day after the midterm elections.

“Well, I think if they win, I should get all the credit. If they lose, I should not be blamed at all,” former President Trump on the prospects of a Red Wave.

Although the states come as no surprise, the dollar figures are staggering. According to OpenSecrets, the five most expensive Senate races of this election cycle were:

The battle for ultimate control of the Senate may come down to a dramatic runoff election in Georgia between incumbent Democrat Raphael Warnock and Republican challenger Herschel Walker (under Georgia law, a runoff between the two candidates with the most votes is required if no candidate reaches 50% support). The head-to-head election is set for Dec. 6. 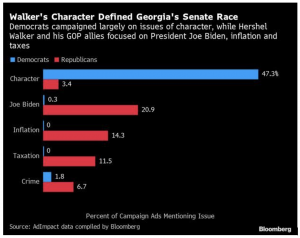