Over the river and through the woods to the lobbying house on Capitol Hill? Although the stereotyped notion of a corporate lobby shop is a K Street office, expense accounts at The Palm or Charlie Palmer’s, and a PAC connected to downtown D.C.’s movers and shakers on the fundraising circuit, companies also use prime real estate to get face time with lawmakers. Among the subtler venues to engage in political advocacy are Capitol Hill townhomes; in fact, I attended an event with more than 20 other lobbyists at spirit and beverage giant Diageo’s property just a few weeks ago. Politico estimates that there are more than 20 properties in and around Capitol Hill that are owned by business groups and others who lobby Congress. The homes are used as workplaces, bases for lobbyists, and fundraising venues for members of Congress. More than anything, these swanky townhouses provide companies, trade associations, religious groups, and lobbying shops with a chance to meet lawmakers and their staff outside the bounds of government property. The townhouses have been a mainstay of D.C. lobbying for decades, and they provide a unique set of benefits to the lobbyists that own them and the lawmakers who attend events at them. First, and foremost, is proximity. Members of Congress and their staff are able to step out of the office, attend an event, and rush back to the floor in time for an evening vote. Second, for members of Congress, who are constantly raising dollars for their next campaign, there is a financial benefit. Compared to the hotels and restaurants that many lawmakers use for fundraising events, the price to rent a room in one of these townhouses is a bargain; costs generally range from $140 to $300 per hour. While the houses do not necessarily make money for their owners, they pay dividends in access and influence as companies with mere corporate offices on the other side of town often struggle to attract members.

American Enterprise Institute (AEI): A Recession is Coming; Will Policymakers be Caught Flat-Footed? The economic outlook is always subject to risk, but seldom has the global economy been subject to as many major downside risks as it is today. The materialization of any of these risks could make 2022 as difficult a year for U.S. and global policymakers as 2009 was in the wake of the Lehman bankruptcy. With U.S. inflation at a 31-year high and proving to be less transitory than the Fed originally held, one major risk to the global recovery is the possibility that the Fed will soon have to end its easy money policy  to keep inflation under control. The danger of Fed interest hikes to the U.S. and world economic outlook is that they would likely burst many asset and credit price bubbles that have been caused by massive central bank bond buying. Another major risk to the global economic outlook is the likelihood of a Japanese-style economic slowdown in China. The bursting of China’s property and credit market bubble could usher in a lost economic decade like those experienced in Japan during the 1980s or in the U.S. following the run-up to the 2008 housing and credit market bust. While the Chinese economy does not have direct financial links to the world’s financial system, a slowing in Chinese economic growth would have major spillover effects for the global economy. In 2008, U.S. and global economic policymakers were caught flatfooted by the Great Recession. The world’s economic policymakers have no excuse for being ill-prepared for another world economic recession next year, especially given all the warning signals.

Capital Alpha: The SPR Release is All About the BBB. President Biden announced a batch of 18 million barrels be released from the Strategic Petroleum Reserve (SPR). These barrels were already set for sale this quarter, so they came as no surprise. Another 32 million barrels of short-term exchanges bring the total volume of SPR releases up to 50 million barrels, which the markets likely anticipated. The single reason for releasing oil from the SPR at this time is to support the progress of the Build Back Better Act (BBB), which will soon be under Senate consideration. A major political obstacle for the $1.7 trillion bill is inflation in the form of ever-higher retail gas prices. Inflation is causing political blowback for the BBB, hurting the president’s approval rating, and clouding Democratic prospects in next year’s midterm elections.

Heritage Foundation: Cost of Thanksgiving Meal Rises Faster Than Wages. This year’s Thanksgiving meal will cost about 8% more, nearly twice the increase in average weekly earnings from a year ago. For a family gathering of 10, expect to spend about $85, roughly $6 more than last November. Ironically, the Biden administration boasted just months ago that a Fourth of July BBQ would run 16 cents less than it did in 2020. The cost of turkey this Thanksgiving has jumped 21%, and it’s not just turkey that has gone up in price—butter costs 7% more than last year, as does ham, while eggs have soared 27%. Fueling up the minivan to travel to grandmother’s house will cost 63% more this year, with gas rising from $2.02 per gallon to $3.29 per gallon. Unfortunately, the spending proposed by Congress—including the “bipartisan” infrastructure package just signed into law—adds to the risk of higher inflation to come. As more dollars chase limited economic resources, the price of those resources is likely to increase. Inflation unbalances, reduces, and misdirects production, and it leads to unemployment. When the government gobbles up more of the economy, less power remains in the hands of the free market. This inflation is political as the Biden administration has worked with the Fed to enable the government to spend enormous quantities of money without raising taxes outright. Families that experienced a rise in the cost of living exceeding their income this year may feel the consequences of “transitory” inflation for years to come.

“Why am I not picking a Democrat? At this moment of both enormous potential and enormous uncertainty, we need stability and independence at the Federal Reserve.”

Aaron Burr was the first sitting vice president to shoot someone. He killed political rival Alexander Hamilton in an 1804 duel; Dick Cheney joined Burr as one of only two vice presidents to shoot someone while in office. Cheney shot attorney Harry Whittington in the face during a 2006 quail hunt.

The American Enterprise Institute’s (AEI) most recent poll focused on Thanksgiving Day cooking responsibilities, dinner table politics, and the best holiday pie. Some of the responses are highlighted below. 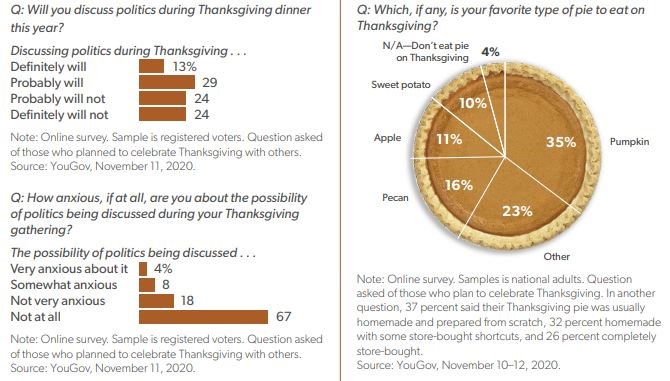