21 precise steps… CLACK …21 seconds facing east… CLACK …21 seconds facing north… CLACK …exactly 21 steps down the black mat…The Sentinel guarding the Tomb of the Unknown Soldier will repeat the process flawlessly for the next hour until there is a changing of the guard. After visiting my father’s grave at Arlington National Cemetery, witnessing the elaborate ceremony has become a Thanksgiving Day tradition for my daughter and me. A changing of the guard is not unique to military pomp and circumstance, however. Similar changes occur across business, sports, culture, and even politics. In fact, a new process for a changing of the guard is exactly what Andrew Yang has in mind. Yang, the 2020 presidential and 2021 New York City mayoral candidate recently announced his departure from the Democratic Party in favor of founding the Forward Party. I was fortunate enough to take part in a discussion between the former candidate and Eurasia Group President and Founder Ian Bremmer. According to Yang, the only way to address the issue of increasing political polarization is to forge a multiparty system to end the American “duopoly” that exists between Republicans and Democrats. While Yang acknowledges that building a viable third-party is a heavy lift, he believes that it is practical and possible in the present. For Yang, a third-party would open up the field and offer voters real alternatives other than just potential spoilers. He feels that the last several years show that there are large swaths of capturable groups among the American electorate that are growing, increasing the electability of third-party candidates. For Yang, the effort is existential with the choices being to either try to make the shift or watch American democracy disintegrate over the next one to three years. By unlocking a more genuine multiparty system, he sees real minority party representation, and better outcomes than this year’s gerrymandering that is making swing districts a thing of the past. While candidates in the duopoly have strong incentives to fall in line with the party, voters are thrashing for answers, and looking for alternatives to whom they view as corruptible leaders on both sides. Yang sees the ideal third-party candidate as someone young, reasonable, center or center-right, not an economic bomb thrower, who comes from outside DC, seems completely unbought, and who has their own resources. According to Yang, the U.S. is fundamentally more dysfunctional than any of the other major advanced industrial democracies, specifically because none of the others is beholden to a duopoly. Yang believes that the situation is so dire that American institutions themselves are vulnerable. Projecting into 2024, Yang sees a Trump vs. Harris matchup, where many Americans will want a third choice, making it likely that a credible third-party challenger could garner as much as 25-35% of the vote.

Brookings Institution: Tracking Regulatory Changes in the Biden Era. Every day, the federal government enacts impactful policy changes through the executive branch. The Brookings Institution’s Regulatory Tracker provides background information and status updates on a selection of particularly important regulatory changes. Using the Tracker, one can learn more about the background of different rules, discover the impact of potential regulations, and monitor a regulation’s progress through rulemaking. Included in the Tracker are rules, guidance documents, executive orders, and other actions across key policy areas. While the Tracker focuses on regulatory changes enacted under the Biden administration, previous entries regarding regulatory changes during the Trump administration can also be accessed. For additional details, including an overview of the rulemaking process, guidance on how to use the Tracker’s interactive features, and an explanation of how entries are selected, click here.

Eurasia Group: A December to Forget in Congress. Congress’ complicated several week push to Christmas is getting more packed with Senate Majority Leader Schumer’s (D-NY) announcement that he plans to start moving the Build Back Better (BBB) bill on December 13th. While Senator Manchin (D-WV) still has not committed to support the bill, or even vote to begin consideration, the base case is for passage in Q1 2022 or later if inflation remains elevated. The other items on the to-do list remain challenging. While Congress did just pass a short-term government funding resolution, items remaining include NDAA consideration and a debt limit solution. It is expected that Congress will address debt before December 24, and that the NDAA will be signed into law by year-end; however, associated risks mean that elevated levels of policy-driven volatility in the last week of December should be expected.

Eurasia Group: A Political Window for a Hawkish Fed Pivot. Federal Reserve Chair Powell gave hawkish comments on the Fed’s reassessment of the pace of tapering during recent testimony. It now appears likely the Fed will double the pace of tapering beginning in January, meaning Quantitative Easing (QE) would end in March, opening the window for a lift in rates by mid-year. Chairman Powell’s renomination allows him more scope to acknowledge policy shortfalls and shift his message. His remarks before the Senate, where legislators from both parties stated concerns about inflation, created the political cover necessary for a hawkish turn by the Fed. In addition, Chairman Powell committed to Senator Warren (D-MA) to allow a new vice chair for regulation substantial freedom to drive the regulatory agenda.

“But we do know that if our most-effective message in 2022 is that Republicans = Trump, we’re going to get creamed.”

– A report conducted by Third Way.

“We’re going to go through this drama. We’re going to fund the government, we may have a structural shutdown over the weekend and then we’ll solve the problem. It’s great for a news cycle, but it eventually fixes itself.”

– Rep. Young (R-AK) on his advice to former President Trump.

Sens. Kelly (D-AZ) and Hickenlooper (D-CO) attended singer-songwriter Bob Dylan’s concert at The Anthem together on Thursday evening, while the Senate was voting to avert a government shutdown.

Conference Board: Consumer Confidence Declined in November; Index Suggests Economic Expansion Will Continue into Early 2022. The Conference Board’s Consumer Confidence Index decreased in November, following an increase in October. The Index now stands at 109.5 (1985=100), down from 111.6 in October. The Present Situation Index—based on consumers’ assessment of current business and labor market conditions—fell to 142.5 from 145.5 last month, and the Expectations Index—based on consumers’ short-term outlook for income, business, and labor market conditions—fell to 87.6 from 89.0. According to the Conference Board, consumer confidence moderated in November, following a gain in October; nevertheless, expectations are that this should be a good holiday season for retailers and confidence levels suggest the economic expansion will continue into early 2022. However, both confidence and spending will likely face headwinds from rising prices and a potential resurgence of COVID-19 in the coming months. 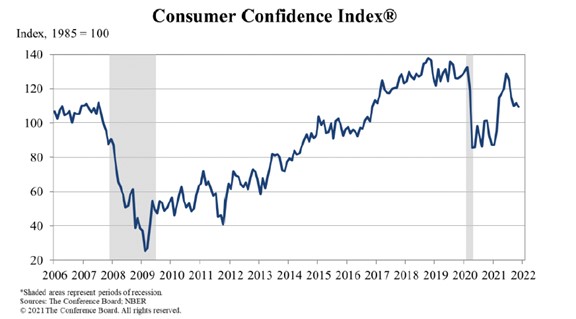