Last Thursday, I had the good fortune of being scheduled to be in Myrtle Beach, South Carolina, for Veteran’s Day. On the plus side was the prospect of sunny 70+ degree days, celebrating the holiday in a pro-military town, and the chance to sneak in a few golf rounds on some top courses. On the negative, was the thought of traversing Northern Virginia traffic and staring down that endless black ribbon called I-95 for over 7 hours. A friend I was traveling with said we should look into flying, and that Southwest had recently added direct flights. Although there are a number of pros/cons to consider when choosing between flying or driving, not the least of which is whether your golf clubs will arrive safely and on time, what sealed the deal for us was the impact driving would have on our wallets—a back of the envelope calculation placed the cost of gas alone, roundtrip, at nearly $189. A $118 plane ticket made our decision a no-brainer. While the rising price of gas literally drove our decision, inflation is now front and center at kitchen table discussions nationwide, and it is the most consequential political issue in Washington right now. The Biden administration has largely maintained that inflation is transitory and that they have limited options to address the issue, at least in the short-term. While it’s true that Presidents get too much credit and/or blame for a nation’s economic fortunes, their policies can exacerbate existing problems, and over the past 11 months, our political class has aggravated inflation with runaway spending and support for policies that dis-incentivize work and inhibit energy production. Instead of allowing progressive ideology to aggravate underlying trends, to address inflation the Biden administration should adopt a moderate, pro-growth strategy. Rather than purposely contrive to make fossil fuels more expensive and reduce their use, a well thought out transition to lower emissions should be implemented. Rather than expanding the welfare state during a tight labor market, efforts should be made to incentivize work. We have actually had staffers, whose bosses are up for reelection in 2024, tell us that they are purposely advocating for sun-setting social provisions in the Build Back Better bill so they can run on extending them in upcoming campaigns. Even outside monetary policy, the White House and Congress can take other actions to address inflation—think placing limits on excessive government spending; promoting free trade in the form of lower tariffs and limited domestic content/Buy American provisions; and supporting free markets in the form of deregulation. Inflation can be addressed through policy, it is whether the political will exists to do so.

Eurasia Group: Inflation Scrambles Multiple Policy Areas. This week, inflation became the dominant theme for the Biden administration and Democratic Party leadership. Although inflation and economic insecurity have been central issues since the spring, the 6.2% year-on-year overall inflation reading was jarring. In fact, polls indicate that the economy and inflation are now the top issues for voters. Inflation has implications across four critical areas of Biden administration policy: (1) Fiscal: negative feedback on government spending policies will be a headwind for the White House’s Build Back Better (BBB) bill. While a $1.5-1.7 trillion bill remains likely to pass, the debate may drag into 2022 and chances of passage will decline if inflation has not subsided by January. (2) The Fed: if President Biden replaces Fed Chair Powell, it will be because of progressive objections to his regulatory policies, not because he has failed on monetary policy. Although replacing Powell in response to high inflation creates a useful scapegoat, it is unclear whether monetary policy would change as a result. (3) Energy: rising fuel prices are a political vulnerability for the administration, whose direction is anti-fossil fuel, making it difficult for them to advocate for increased production to combat price increases. To alleviate the political pain, the White House will continue to blame OPEC+, project confidence that energy prices will abate in coming months, and maintain that a Strategic Petroleum Reserve (SPR) release remains on the table. (4) Trade: further symbolic measures aimed at ports and roads are likely, but high inflation will hurt both a proposed transition to a carbon border adjustment for steel and lower tariffs on China.

Eurasia Group: Biden’s Balancing Act—Look Effective on Climate but Not Harmful on Inflation. Inflationary pressure associated with increasing energy prices creates a difficult balancing act for President Biden—the White House is caught between advancing their climate agenda and not exacerbating high fuel prices. While moderate Democrats see inflation as a key reason to scale back the Build Back Better (BBB) package, the administration is under increasing pressure from progressives to use the Strategic Petroleum Reserve (SPR) to address energy price inflation to ease the BBB’s passage. Moving forward, the president will have to keep balancing his climate and economic goals, and his record suggests that he will take a pragmatic approach that may underwhelm progressives even as it delivers tangible progress.

National Journal: Democrats Stuck in Their Own Echo Chamber. Earlier this month, Sen. Manchin (D-WV) drove progressives crazy with a statement of common sense: “We can’t go too far left. This is not a center-left or a left country. We are a center, if anything, center-right country.” Denying that political reality is at the heart of Democrats’ political problems. While party leaders believe they can win elections by mobilizing the base and tying Republicans to former President Trump, the strategy backfired in Virginia. In fact, the Democratic Party’s strategy memo for the upcoming midterms is more of the same: tout the party’s emergency spending against COVID, champion its social-spending plan [the BBB] and infrastructure bill, and demonize GOP candidates. There is no mention of what will be done to mitigate rising inflation, soaring gas prices, or increasing rates of violent crime. The stay-the-course path fails to factor in President Biden’s low approval ratings and Democrats’ historic deficits on the generic ballot. In the rush to claim the pro-democracy mantle, Democrats are ignoring voters’ signals to slow the progressive agenda down. Although Democrats do not need to abandon their principles, they do need to be responsive to public sentiment. First, they should not deny the reality of inflation and the inconvenience of supply shortages when voters say it is a problem, and they should strive to come up with a plan instead of lazily claiming that $1.75 trillion in additional social spending will magically solve the problem. Second, they should talk about the need for a larger police presence in urban hot spots. Third, when pitching infrastructure to working-class Americans, they should not frame the plan as primarily an equity issue. If Democrats combined the desire for a secure social-safety net with guarantees of actual economic and physical security, they could hit a political sweet spot. Dissatisfied voters always punish the party in power, and right now Democrats would endure the worst from a disillusioned electorate.

“Excessive inflation and a sense that it was not being controlled helped elect Richard Nixon and Ronald Reagan, and risks bringing Donald Trump back to power.”

“By all accounts, the threat posed by record inflation to the American people is not ‘transitory’ and is instead getting worse.”

The last time inflation was higher than the October figure of 6.2% was November 1990.

Images of the Week:

As inflation took off in early 2021, the question was became whether it would prove transitory or not. That is, whether factors pushing prices would persist and deepen or turn out to be temporary once supply chain constraints resolved, more Americans returned to work, and demand normalized. While pressures were originally concentrated in categories that bounced back after months of lockdown—airfares, hotels, and restaurants, by the fall, inflation had broadened to categories including food, electricity, and rent. The concern among those who think inflation pressures are more than a blip is that they persist long enough to become self-perpetuating, as happened in the 1970s. 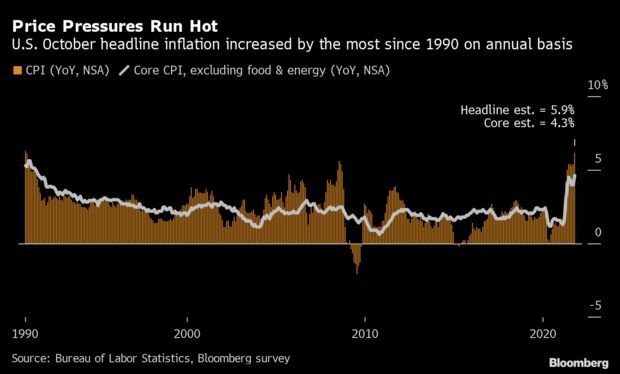 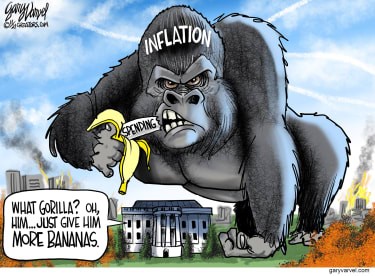