It’s the most wonderful time of the year. For me, that’s Thanksgiving. I love getting together with family without the focus being on presents; I love the food; and I love the football. In fact, my father’s side of the family descends directly from Edward Winslow, who was among the Pilgrims present at the very first Thanksgiving (The First Thanksgiving, 1621 (eyewitnesstohistory.com). As a government affairs specialist and lobbyist, I’m thankful this year’s midterm elections seemed to go off without a hitch. Despite concerns about volatile protests and violence pre-election, the midterm results were met with only muted claims of election fraud, and even those were geographically specific. The subdued response allowed political consultants to analyze why the election played out like it did, and no one does that better than Mehlman Castagnetti Rosen & Thomas (PowerPoint Presentation (mehlmancastagnetti.com). According to Bruce Mehlman, although 2022 may officially be a “change election,” with the House changing hands, it was barely one—27 of 28 incumbent governors won reelection; 28 of 28 Senate incumbents won (27/28 if GA flips); and 356 of 365 (97.5%) House incumbents won. What’s more, 17 of 17 Trump states elected a Republican senator and 15 of 16 Biden states elected a Democrat. The reason for the consistency: voters were seeking stability at a time of heightened disruption. In truth, the 2022 election resembled 2020 in that voters sought less chaos (Biden > Trump), providing no mandate for radical change. In addition, candidates did matter. The GOP challengers who lost Senate races did so because of extremist positions and/or weak campaigns. In contrast, the GOP incumbents who won mostly focused on today’s challenges rather than yesterday’s conspiracies. Issues also mattered. Voters concerned about rising inflation, increasing crime, lack of border security, and “woke” intolerance, voted Republican, while voters concerned about abortion criminalization, election denialism, and a return to Trumpian chaotic disruption voted Democrat. What’s in store for the next two years are the 3-Cs: confrontation, competition, and [uneasy] cooperation. We’ll see confrontation in the form of fiscal fights, oversight and investigations, and the “woke wars.” Competition will be held over who ends up leading each party and who can win over the working class. Room for cooperation does exist, and cooperation is likely to be seen in containing china, addressing Big Tech, and promoting resiliency.

Trump’s Early 2024 Announcement Will Not Clear the Field Says Eurasia Group. Former President Trump announced his historically early 2024 presidential bid this week. A Politico/Morning Consult poll has 47% of Republican primary voters backing Trump in a primary, despite almost certainly being a liability in a general election. No doubt, Trump drives turnout with Republicans, but he also drives turnout with Democrats and repels independents. Many Republicans believe they face a dilemma: they cannot win with Trump, but they cannot win without him if his base leaves the party. However, Trump will not clear the field. The Morning Consult poll put Florida Governor DeSantis at 33% with Republicans and no other candidate above 5%. DeSantis is well-positioned to take on the former president, his profile boosted by frequent confrontations with the media over his education policies and, critically, opening up Florida early during Covid. Others who may get in the Republican race include Texas Governor Abbott, former Secretary of State Pompeo, former Vice President Pence, New Hampshire Governor Sununu, and former UN Ambassador Haley. These are the early days of a long campaign, and Trump’s early announcement is a huge risk. He is likely to be the only entrant for at least several months, allowing him to attract all the attention for better and for worse. He will continue to face potential criminal liability from a prosecutor in Georgia and the Department of Justice. With competitive primaries possible in both parties next year, the 2024 campaign will dominate American politics in 2023.

Observatory Group Sees a Large Year-End Lame Duck Package in the Works, Passage Unclear. This week, Congress began its post-election lame-duck session. With the House switching from Democratic to Republican control in January, Democrats will try to pack as much legislation as possible into this lame-duck session, voting up until just before Christmas. A limiting factor will be Senate floor time; with only six weeks, time is scarce and, therefore, valuable—the new Congress will be sworn in on January 3. The FY 23 omnibus government funding bill and the National Defense Authorization Act (NDAA) are the two must-pass pieces of legislation in the lame duck. While Democrats are considering combining the omnibus and NDAA into one larger package, it is likely that other pieces of legislation, and supplemental funding for Ukraine, will eventually be added to the omnibus. Because the omnibus and NDAA both require the support of at least 60 Senators to pass, any additions to the two bills will also need that level of support. At present, the federal government will run out of appropriated funding on December 16. With Georgia’s Senate runoff election scheduled for December 6, Republicans are unlikely to give Democrats the necessary votes to move the omnibus forward until after the election. Therefore, Senate action on the omnibus will occur after December 6 and before December 16, most likely the week of December 12. Although there have been discussions about addressing the debt limit in the lame-duck session, an increase before the 118th Congress is unlikely. Legislation to address the debt limit will be deferred until sometime in 2023.

Earlier this week, I had the opportunity to speak candidly with a retiring Republican member of Congress. Among his more insightful comments were:

“At the end of the day I would just tell people to go check out the scoreboard from last Tuesday night,” Florida Gov. DeSantis (R) responding to questions about former President Trump’s third White House bid.

Rep. Fred Upton (R-MI) is the only member of Congress to vote to impeach two different presidents.

Committee for a Responsible Federal Budget Says Federal Debt Will Reach Record Levels Sooner Than Expected. The fiscal and economic outlook has deteriorated substantially since May’s Congressional Budget Office (CBO) baseline. At the time, CBO projected debt would reach a record 110% of GDP by 2032. However, updated baselines now project that debt will reach 116%, deficits will reach 6.6 %, and interest will reach 3.4% of GDP. In fact, under a more realistic scenario, debt in 2032 would reach 138%, deficits would reach 10.1%, and interest would 4.4% of GDP, all unsustainable fiscal trajectories. 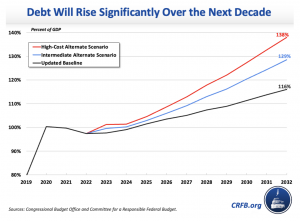