How was your Thanksgiving? Ours was good. The general talk around the table was about how the kids are doing, playoff prospects for the Ravens and Commanders, and any upcoming anniversary, Christmas, or Hanukkah plans. We largely veered away from politics, and had all the normal conversations most families do…except for one. I suspect a discussion about modern-day, neo-Malthusians entered very few, if any, family conservations last Thursday. In short, Thomas Malthus was an 18th century economist who theorized that the linear growth of food production would not be able to keep pace with exponential population growth soon resulting in disease, war, and famine. Malthus was wrong, of course, as he did not foresee the positive impact innovation, technology, and “creative destruction” would have on GDP growth and food production. With last month’s UN report that the world’s population just surpassed 8 billion, neo-Malthusians are using the occasion to renew concerns about the dangers of overpopulation, the global food supply, impending famine, and more immediate threats to “sustainable development.” For those concerned with population growth, few are comforted by the fact that fertility rates in advanced countries are already on the decline or estimates that project world population peaking at 9.8 billion in 2080 and falling thereafter. Our discussion included the notion of “peak oil,” the hypothetical point in time when the maximum rate of global oil production is reached, after which time production enters irreversible decline. As recently, as 2009, many believed that the time of “peak oil” had already come and gone. However, technological innovation in forms such as horizontal drilling and hydraulic fracturing has moved the time of “peak oil” decades beyond previous estimates (current forecasts place “peak oil” to be as late as 2050). What was most interesting about the discussion was found not in the merits of any one argument, but what informed individual positions. Seated at the table was a high-ranking Transportation Department official, and it was not lost on me that future federal government policy positions could be guided by personally held beliefs. For a lobbyist, prior knowledge of what may inform a legislator’s, staffer’s, or bureaucrat’s policy stance is pure gold. In order to develop winning advocacy strategies, lobbyists often utilize various stakeholder mapping initiatives to identify the people, organizations, and connections among them with the most influence on a particular policy. The Washington office developed one such map to assist the work we did with Fyffes, and just today encouraged Highline to develop one to address a public policy issue they now face. With links to the National Journal’s Network Science Initiative (NSI), please consider contacting the Washington office if you face a policy issue that requires stakeholder mapping.

Fed Chairman Powell Makes His Case at Brookings. According to the Eurasia Group, Federal Reserve Chairman Powell’s speech at the Brookings Institute, which Washington office staff attended, was a clear defense of the Fed’s tightening strategy. While the focus of the speech was on the impact services have had on inflation, the central bank chair concluded that the economy shows merely tentative signs of rebalancing and wage growth remains above levels consistent with a 2% inflation target. The speech both confirmed the likelihood of a smaller rate hike of 50bp at the December meeting and signalled that more hikes are likely to come. The Fed Chair stressed that restrictive rates will need to be maintained for an extended period, even at the cost of sub-par economic growth. It is expected that the upcoming Fed meeting will signal that any rate cuts will be put off till 2024. This speech was meant to be a major statement by the chair, and it was aimed at the broader public and Congressional critics as strong bipartisan support for Fed tightening to reduce inflation has frayed as the pain from higher interest rates is beginning to be felt. Chairman Powell’s speech served as an argument that the Fed’s rate hikes are prudent, appropriate, and deserve public support if the goal of price stability is to be achieved.

CapstoneDC Previews a Republican-Led House and Foreign Policy. The change of power in the House will have ripple effects across U.S. foreign policy. As always, adversaries are looking to exploit divisions, while allies are seeking reassurances of function. The fact that the election ran relatively seamlessly, despite increased polarization and continued allegations concerning election integrity, should send a positive signal to American partners. With the results of the midterm elections largely finalized, scenario planning for 2023 is ongoing across Washington. Three key foreign policy issues will see notable impacts. First, China hawkishness will increase, but will not conclude with any major shift in policy. House Republicans made clear they intended to make China a priority should they gain the majority, and a GOP-controlled House will push a harder line on China, seeking to outflank the Biden administration using annual national security legislation—the  National Defense Authorization Act (NDAA) and annual appropriations measures. These bills will include more aggressive measures than Democrats would insert on their own, forcing House Democrats and the White House to play defense on a politically compelling issue, and one with a fair amount of bipartisan consensus. In the broader context, this could mean further restrictions on outbound investment and technology transfer. Second, despite headlines, Ukraine support will remain steadfast. Although much has been made of likely Speaker McCarthy’s (R-CA) comment that Ukraine will “not get a blank check,” the statement has been blown out of proportion. Rep. McCarthy clarified he intended his statement as a ‘good government’ pronouncement, not a repudiation of Ukraine aid. Philosophically, Republicans remain steadfast supporters of Ukraine spending, particularly Sen. McConnell, and of the Trans-atlantic relationship. Politically, most Republicans do not want to expose themselves to accusations of going weak on Russia or tacking left of Biden. Bottom line, Congress will not shift its approach on Ukraine, even if European support for Ukraine softens. Third, Congressional relations with Saudi Arabia will thaw. Republicans will focus oversight efforts on perceived shortcomings of the Biden administration’s foreign policy, with the 2021 Afghanistan withdrawal top of the list. The administration’s approach to Saudi will be an area of interest given the nexus between U.S.-Saudi dynamics, oil prices, and traditional Republican support for the kingdom. Bottom line, the Executive Branch, under multiple administrations, has assumed a larger role in foreign policy. A Republican-controlled House will make life difficult for the White House’s foreign policy team, but razor-thin margins in Congress, coupled with the divided nature of government, ensures that foreign policy will remain predominantly the purview of the White House.

The Conference Board Sees an Imminent Recession Followed by Slower Economic Growth. The 2023 U.S. economic outlook has deteriorated under the weight of high inflation rates and rapid monetary tightening. Falling consumer and business confidence, softening consumption and investment, and geopolitical-induced energy shocks are likely to tip the economy into recession around the turn of the year. However, the recession is projected to be short and mild, amid a strong labor market and relatively heathy consumer and business balance sheets. Beyond 2024, the economy is likely to return to a slowing growth rate trajectory. Key risks around the longer-term outlook are related to geopolitical frictions, environmental challenges, labor markets, and inflation. In terms of what to expect in the year(s) ahead:

The Biden administration is preparing for Congress to pass a one-year continuing resolution (CR), the worst possible outcome for some federal agencies and a political problem for Democrats and the White House. While government funding runs out December 16, this deadline is widely expected to be extended until December 23. At some point, however, Democrats will want to pass a bill that keeps the federal government open through the end of September 2023. Although an omnibus bill would allow Democrats to put their imprint on another year of federal spending, GOP and Democratic appropriators have yet to even agree on a topline number for FY2023. With the 118th Congress beginning January 3, the Office of Management and Budget (OMB) is already preparing to minimize disruptions to government services in the event of a full-year CR. Sources tell us the lack of clear progress towards a deal has forced the Biden administration to take seriously the possibility of a full-year CR.

“I’m very seriously considering running for Senate. I have not made a final decision yet, you know, but I promise you irregardless [sic] to whatever I do, I’ll be your governor the next two years,” West Virginia Governor Justice (R) hinting at challenging Democrat Senator Joe Manchin in 2024. As a result, to defend his seat, Sen. Manchin may be forced to move further right in the 118th Congress

Rep. Hakeem Jeffries (D-NY) will become the first African American to lead either party in Congress, taking over for House Speaker Nancy Pelosi (D-CA) in the 118th Congress.

Leading Economic Index (LEI) Continues to Fall. The Conference Board’s LEI decreased in October. The LEI dropped for an eighth consecutive month since its February 2022 peak, suggesting the U.S. may already be in recession. The ongoing downturn reflects consumers’ worsening outlook amid high inflation, rising interest rates, and declining prospects for housing and manufacturing. The Conference Board forecasts real GDP growth at 1.8% in 2022, and a recession to start near yearend lasting through mid-2023. 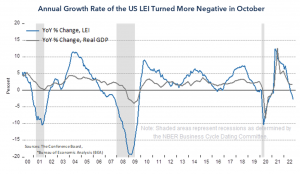