Earlier this week, I had the opportunity to present to the latest group of Sumitomo-sponsored Tomodachi scholars. Although this year’s presentation had to be virtual, in year’s past this group of students has visited Washington, touring such iconic landmarks as the White House, the Capitol complex, and the Pentagon, where each was presented with a Challenge Coin by Defense Secretary Ashton Carter himself. It was refreshing to be in front of such a curious, idealistic group again being challenged and questioned on a range of public policy issues. In brief, their questions revolved around the difficulty in passing legislation, the purpose of lobbying, and the role of consultants; with the brief answers being legislation is difficult to pass by design; lobbying is largely education; and even lobbyists need to build their networks continually.

Later that same day, I met with one of those lobbyists/consultants, Nancy McLernon, the President and CEO of the Global Business Alliance (GBA). Nancy is regularly listed among the top 50 lobbyists in the country, and SCOA has been a long time member of the GBA. The GBA is unique among trade associations in that it is the only group that advocates exclusively on behalf of foreign subsidiaries operating in the U.S. Our discussion focused on the policy outlook for the remainder of the year with the conclusion being that the bulk of 2022 will be more about politics than policy. As such, rather than drafting legislation or advocating for/against specific bills, GBA will actively position itself on Capitol Hill as a solution rather than a voice of “No.” To do this, they have designed what they are calling their “Common Ground Campaign.” At its core, Common Ground will focus its message on foreign subsidiaries’ contribution to American jobs, workforce development, and direct investment. For more information on this campaign or to participate directly in the campaign to actively build congressional comity and be a catalyst for positive congressional action, please reach out to the Washington office.

So Where Does the BBB Bill Stand? Capital Alpha Explains. It is unlikely that the Build Back Better (Triple-B) bill will pass before September—in fact, political odds-makers say there is just a 20% chance it passes prior to the August recess; 50% odds it passes in September; and 30% odds it never passes at all. Escalation in Ukraine is a risk factor, and so is the possibility that House progressives will not accept a bill that is dramatically smaller than what they have advocated for all along. More than ever, Triple-B seems to be a health-focused reconciliation vehicle that may have a few other things thrown in, with clean energy tax credits being the most likely add-on. Still, a recent poll of senior Congressional staff indicated that nearly half (49%) believe the Child Tax Credit is the credit most likely to make it into a rebranded Triple-B package—a figure political analysts view as a sign that many in Congress are not ready to accept the reality of a smaller bill. The bottom line, they say, is that President Biden failed to move the needle on Triple-B in his State of the Union address, largely because he did not clearly specify what he wants out of the bill and continued to push for such things as the Child Tax Credit, free community college, and much else that will not pass with inflation running at 7.9%. The same poll also noted that just 47% of staffers now see tax credits for wind and solar as likely to be added to any final package, an indication that a bill with no clean energy tax credits is now a possibility. The base case for the non-health-care parts of the bill stands at $300 billion in tax credits and $550 billion in gross spending, although a larger bill cannot be ruled out. Past discussions about clean energy provisions, including the investment tax credit (ITC) and production tax credit (PTC) for wind and solar electric generation, remain viable; however, the EV tax credit, if it survives, will be smaller than originally proposed, and the union-only bonus will be gone. If there is a clean energy tax package, direct pay will most likely remain, despite Senator Manchin’s (D-WV) opposition.

Eurasia Group: Congress Approves Additional Ukraine Aid, Russia Starts Blocking Exports. As part of a deal to fund the government, the House and Senate approved an additional $13.6 billion in aid for Ukraine, divided between military and humanitarian assistance. Ukrainian outreach heavily influenced the contents of this package, which more than doubled in size over the last week. Also passed was a measure to ban Russian energy imports, including oil; the move was largely symbolic given that the White House had already acted to ban energy imports earlier in the week. Regardless, the vote to ban energy imports is a key signpost of the substantial political support for sanctions escalation against Russia going forward. In fact, the Biden administration seems to be very risk accepting in their approach to Russia so far, and U.S. support for sanctions escalation will not decline in the near term as the conflict continues to expand. While Americans say they are willing to pay more to fight Russia, 7.9% inflation remains a major political vulnerability for President Biden, and soaring gas prices will contribute to higher inflation. Russia has begun to block some exports, including turbines, vehicles, and certain types of timber; going forward, the expansion of Russian export blocks could create supply chain issues for American firms that rely on specialized exports.

“The fight is here; I need ammunition, not a ride.”

-Ukrainian President Zelenskyy in response to a U.S. offer to evacuate him.

“I said I will level with the American people from the beginning. When I first spoke to this, I said defending freedom is going to cost. It is going to cost us as well in the United States.”

Russia Surges Past Iran to Become World’s Most-Sanctioned Nation. In a span of just 10 days following the invasion of Ukraine, Russia vaulted past Iran to become the world’s most-sanctioned nation. In a surge of action starting on February 22, Russia became the target of 2,778 new sanctions, bringing the total to more than 5,530. 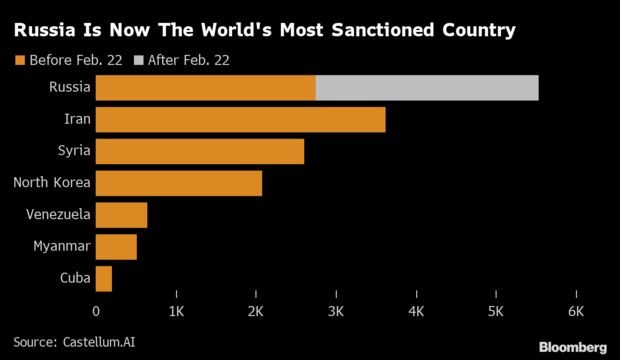