This issue marks The Washington Connection’s one-year anniversary. For just over the past 52-weeks, the Washington office has offered a ‘Thought of the Week’ to open the blog. Reflecting back over the past year, we’ve touched on everything from politics to the economy to mental health. Rather than offering our own thought this week, we thought it might be good to listen to what others have to say, and who better to listen to than corporate CEOs? A recent survey by the Conference Board’s Committee for Economic Development found that Russia is the top policy priority American CEOs want the President and Congress to address this year. In fact, Russia concerns even superseded inflation and strengthening the economy, which followed closely behind. The survey gauged more than 80 CEOs and Board Directors, more than 90% of whom are at companies with more than $1 billion in annual revenue. These business leaders were asked a series of questions about timely issues, including the COVID-19 pandemic, the war in Ukraine, and the Federal Reserve’s stance on inflation. More than two-thirds viewed Russia as the biggest policy priority for 2022. At the same time, roughly 67% agreed with President Biden’s handling of the situation thus far. Closely related to the primacy of Russia on the list of concerns, and the disruptions it is causing to both the global and domestic economy, more than 80% agree the Federal Reserve needs to move faster on inflation. On the pandemic front, the vast majority, more than 90%, believe it is time to treat COVID-19 as an endemic virus. What’s more, the results were mixed about the success of vaccination and testing mandates for companies with more than 100 employees—38% said the mandates did not help nor hurt vaccination rates in the workplace, and only 7% said the vaccination mandates helped a great deal. Despite the fact that the U.S. has dealt with a multitude of compounding crises since the start of 2022, the bottom line was that CEOs and Directors are unified on several key issues—notably, the urgency of the war in Ukraine and support for faster action by the Federal Reserve to address inflation. Interestingly, just 31% said the Environment/Climate Change was a top priority, while 32% said that it was neither not too important (21%) nor a focus at all (11%).

National Journal Thinks Trump Could Go 0-3 in Senate Primaries. Former President Trump is staring at the very real chance that his endorsed candidates could go zero-for-three in competitive Senate primaries in May. Such an outcome would underscore his already mixed record in primaries and raise serious doubts about the depth of his political clout within the Republican Party. Mr. Trump’s undisciplined political strategy, seeking to punish candidates he deems disloyal, faces a wall of resistance in the South, one of the most pro-Trump regions of the country. The primary developments offer clear evidence that Trump’s bark may not carry as much bite as it once did. If he finishes May with a 0-3 record in some of the most consequential Republican contests, it will give more space for the GOP to move past the former president.

Political ‘Center’ Reinvigorated? Asks National Journal. Russia’s war in Ukraine has galvanized the American public in a way that even the White House didn’t envision at the outset of the invasion. Stirring speeches by Ukrainian President Zelensky, harrowing images of humanitarian disaster, and rapidly changing public opinion demanding that America do more has pushed the Biden administration to take measures that it wasn’t initially ready to take. Recent polling shows that a majority of Americans (56%) say President Biden wasn’t tough enough confronting Russia initially; 71% say they support a ban on Russian oil even if it means higher gas prices; and 79% would support a U.S. military response if Russia were to attack a NATO member (other polls have found that 74% would go so far as backing a no-fly zone over Ukraine). In fact, the Wall Street Journal finds the Russia-Ukraine war as the second-most important issue for the federal government to address, after the economy. While it’s worth taking such political snapshots with a grain of salt, the numbers paint a clear portrait of American hawkishness at a level that could go so far as having wider political implications. While the Russian invasion isn’t likely to shift broad political dynamics at the general-election level, within parties, the Russian attack looks like it is marginalizing the most extreme voices on the Right and the Left. President Trump’s past praise of Putin has proven to be an embarrassment to several Trump-endorsed candidates, and far-left members are facing scrutiny for their lukewarm support of Ukraine. With over half of Americans following the news out of Ukraine “very closely,” and with Zelensky holding near-unanimous favorability in the eyes of Americans, those positions are well out of the political mainstream. If the Russian invasion of Ukraine has any longer-term political implications, it may be bolstering both parties’ establishments against the fringes.

Observatory Group’s Take is that Washington is Stuck Being Washington. For observers questioning whether the events in Ukraine could translate to a rethinking of U.S. policy or even bipartisanship around policy solutions—don’t hold your breath. Not only does inter- and intra-party distrust remain, but America’s system of checks and balances continues to perform largely as designed—slowly, reactively, and without much creativity. All sides will use the war in Ukraine to justify long-held views rather than create new ways of thinking about intractable problems. Consider policies impacting energy, where an entrenched, pro-U.S. production camp (largely Republicans) remains pitted against an entrenched, pro-environmental camp (largely Democrats). Neither side has a straightforward policy solution to fix the near-term problem of high energy prices, and a general lack of urgency fosters little incentive for compromise on overall policy. As a result, the Biden administration has just two real options to unlock additional near-term supply: (1) engage Iran and Venezuela; and/or (2) release more barrels from the Strategic Petroleum Reserve (SPR). Negotiations with Iran and Venezuela remain highly controversial, and, as such, an agreement with either regime cannot be viewed as a foregone conclusion, meaning another SPR release may be the administration’s only option to increase supply. Meanwhile, expect Congressional Democrats to eschew responsibility for near-term production issues and remain focused on renewables production and electric vehicle demand. To the extent Democrats and Republicans can agree on anything energy related, it is likely to be on extending renewable energy tax credits for wind and solar production.

Politico: Congress vs. the White House. Pressure Politics Builds in D.C. Something striking has happened in Washington since Russia invaded Ukraine. Congress, which typically takes a back seat on foreign policy, has repeatedly driven the White House beyond its comfort zone with bipartisan demands for more assertive policies. It started with calls for tougher sanctions, then escalated to an appeal for a larger military and humanitarian assistance package. Members of both parties then clamored for a U.S. ban on Russian oil, which the White House saw as politically risky given the effect on gas prices at home. And they insisted that the U.S. end Permanent Normal Trade Relations with Russia. The tactics have worked. This week, lawmakers have been at it again, nudging the Biden administration to go further than it wants in facilitating the transfer of fighter jets from Poland to Ukraine. The White House, worried about ratcheting up tensions with the Kremlin, has rejected Poland’s offer, so far, and Russia warned that it would view any such delivery as an escalation. While the Biden administration has gone out of its way to avoid any moves that could trigger further conflict with Russia, even taking steps to ease tensions, supporters in Congress of approving the transfer argue that not only has Russia drawn multiple lines that the West has already crossed, but that Moscow remains the aggressor. Although Republicans have led the charge for the transfer, some Hill Democrats have now joined the fray. Even Sen. Klobuchar (D-MN), who doesn’t break with President Biden often, said a transfer should not be ruled out. Is it just a matter of time before the Biden White House flips and moves on the Poland transfer? Perhaps. But what is clear is that Congress has already had success with such vocal, bipartisan pressure and may now continue the tactic going forward.

“Today, the Senate has finally delivered on something Americans all over the country want: to never have to change their clocks again…No more dark afternoons in the winter. No more losing an hour of sleep every spring. We want more sunshine during our most productive waking hours,”

“We’re not doing nearly enough, quickly enough to help the Ukrainians…President Biden needs to step up his game right now before it’s too late.”

Although proposals have not been finalized, the Capitol is expected to reopen in three phases, with the first beginning March 28 and the final expected to begin on Labor Day.

$13.6 billion in emergency funding for Ukraine made it into the fiscal 2022 omnibus appropriations bill. Here is where it’s going: 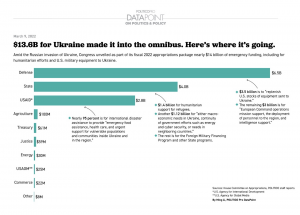