Have you filled up your gas tank recently? I did this morning on my way to work, and after the pump clicked off, the tally caused me to remember nostalgically how I used to add, almost instinctively, the $15 car wash to the total. As I drove away, I thanked the stars that my children are grown, and I no longer have to fill an SUV or mini-van more than once a week. Along with grocery prices, fuel costs are just the most recognizable and immediate example of the inflation that is gripping the nation. Despite President Biden saying that “fighting inflation” is his “top domestic priority,” one of the most disappointing aspects of today’s debate is the White House’s apparent refusal to take any responsibility for inflation being at a four-decade high. Administration officials continue to insist that the $1.9 trillion American Rescue Plan was not a cause of inflation’s spike, that inflation is an international phenomenon caused by Covid-related global supply chain disruptions, and that Russia’s invasion of Ukraine is the primary reason behind rising oil and food prices. While these may be contributing factors, what exactly is inflation and how can it be controlled? Inflation is simply the failure of total supply to keep up with the increase in total demand. As such, inflation can be controlled by increasing the supply of goods and services and/or reducing money incomes to control aggregate demand. At present contractionary monetary policy, which the Federal Reserve is pursuing through 75 basis point rate hikes and reductions in its balance sheet, is the more popular, and seemingly sole, method of controlling inflation. The goal being to reduce the money supply within an economy and slow economic growth by making credit more expensive, which ultimately reduces consumer and business spending. Yet, relying strictly on monetary policy to counter inflation entirely ignores other measures available to the president. In addition to monetary policy, inflation can be fought via a fiscal policy that lowers government spending to reduce aggregated demand. What’s more supply-side policies such as deregulation and the pursuit of free trade help reduce business costs and lead to lower inflation. Combining a pro-growth economic strategy that includes less government spending, lower taxes, free trade, and the removal of incentives not to work with a consistent monetary policy is the proven method to address inflation. Unfortunately, the Biden administration’s unwillingness for progressive political reasons to assume any responsibility for today’s rising prices leaves the Federal Reserve as the only option to tame inflation. By doing so, the White House is increasing the chance that the Fed’s higher interest rates and liquidity withdrawal will lead to recession. As a direct result of President Biden’s lack of leadership in addressing inflation and a deteriorating economy, Democrats are likely to pay their own hefty heavy price in this November’s mid-term elections.

Eurasia Group: Upending Long-Standing Legal Precedents Will Change Regulatory Environment in U.S. While the Supreme Court’s likely overturning of Roe vs Wade, allowing state bans on abortion to go ahead, will be the blockbuster judicial political event of the summer, anticipated changes in how American courts approach regulation will be more impactful for the long-term business climate in the U.S.  Conservative challenges to long-standing legal principles, including Congress’ ability to delegate authority to executive branch agencies and the courts’ deference to those agencies in interpreting laws could restrict agency action and lead to deregulation through future lawsuits. This dynamic will be on display soon if, as expected, the Supreme Court limits the ability of the Environmental Protection Agency (EPA) to regulate greenhouse gas emissions. The conservative tilt of the courts, a key legacy of President Trump, will continue to make it challenging for the Biden administration to pass new regulations, extending the gridlock that markets are used to from Congress to the executive branch as well.

Capital Alpha’s Take on President Biden’s Call to Congress to Enact a Three-Month Holiday from the Federal Gasoline Tax of 18.4 cents/gallon. It’s hard to see what the White House thinks it will gain by the announcement. It’s a grand gesture, like the SPR drawdown, or the E15 expansion, which will have no significant impact in the near-term but will probably make things worse over the long-term. It makes for a nice press release, but there is zero chance Congress will enact it. The market is calling for demand destruction, and lowering the price when supplies are tight will only lead to demand creation, with no guarantee that cost savings will be passed on to consumers. At any rate, the price of retail gasoline will continue to rise this summer, meaning that any reduction in price from the tax holiday will be short-lived. Congress has considered similar tax holidays in the past and repeatedly rejected them. House Speaker Pelosi (D-CA) is no fan; and in fact, the White House itself has been considering some variation of the holiday or a consumer rebate for months and until now had always decided against it. The timing of the announcement also makes no sense, considering it comes at the same time that refining industry CEOs met with Energy Secretary Granholm to come up with a plan for increasing capacity. It could be that there is a master plan in the works that analysts don’t appreciate; more likely, it could be that the Biden administration remains as disconnected as ever from Capitol Hill to the dismay of key allies. Influential voices have long been calling for a shakeup of White House staff, and this announcement could make those voices louder.

Bloomberg Government: Inflation Strains Biden Administration’s Big Win. The federal government can buy fewer roads, bridges, and tunnels today than it could seven months ago when President Biden signed the $1 trillion infrastructure law. Historic inflation and labor shortages now threaten to hamstring one of the administration’s signature successes, which lawmakers were hoping to tout in reelection campaigns. States across the country are seeing project bids come in as much as 30% above their original expectations, as contractors complain about supply problems, spiking material costs, and a shortage of workers. The law (Public Law 117-58) sends billions to be spent on surface transportation each year over the next five years, limiting the ability of officials to wait out the worst of the economic turmoil. Administration officials have acknowledged the strain on projects, but are banking on the legislation’s multiyear funding, hoping inflation will tamp down while projects still move forward. The pressures have already led to some changes at the federal level, including delayed Buy America requirements, a push to build up the workforce, and benchmarking to ensure that high bids are a result of cost pressures, not profit-taking.

“It’s certainly a possibility,” Federal Reserve Chairman Powell during Senate testimony when asked whether central bank efforts against inflation could lead to a recession.

President John Tyler had 15 children, the most of any U.S. president.

Everyone Knows that Gas Prices are High—at all-time highs nominally and approaching record territory adjusted for inflation. But what exactly are you paying for when you put $5/gallon gasoline in your vehicle? When you buy gas, 60% of your money currently goes to crude oil. The rest goes to refining (17%), distribution and marketing (11%), and state and federal taxes (12%). On average, gas stations make just 5 cents/gallon of gas sold. The numbers are elastic, based on the cost of oil, the price of gas, and other factors. For instance in May 2017, when the average price of gas was $2.39/gallon, crude oil made up only 48% of the price of a gallon of regular gas, and it was just 25% in April 2020, when the pandemic sapped demand for fuel. 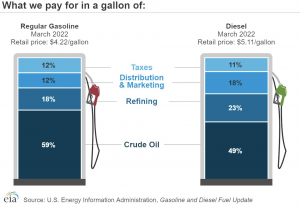