This week, I attended back-to-back National Association of Manufacturers (NAM) briefings to gauge the likelihood of the China Competition bill’s passage; the legislation includes the Miscellaneous Tariff Bill (MTB), which is important to our subsidiary Presperse. The first briefing featured Gideon Bragin, Executive Director of the House Democratic Caucus, while the second featured Will Dunham, Deputy Chief of Staff for Minority Leader Kevin McCarthy (R-CA). As you might expect, the two didn’t agree on much, other than that the MTB and all the bill’s trade provisions are on thin ice. They also agreed that dysfunction runs rampant through Congress, particularly the Senate. Probably the most notable example of this dysfunction is Democrats’ failure to pass a reconciliation bill despite controlling both the House and Senate. Although the two didn’t recommend what could be done to pick up the pieces, each did highlight that House appropriations bills proceeded through regular order. While we’ve talked about the value and importance of regular order in this space before, unless Congress miraculously changes its ways, we are looking at an upcoming congressional cycle of extreme gridlock if Republicans take the House as expected in this year’s mid-term elections. Typically, when people discuss how to improve Congressional operations, they go no further than term-limits. Holding that reforms to make Congress more functional should seek to improve the quality of legislation, not the quantity, here are five additional ideas to be considered. First, force Congressional Committees to debate. It’s ironic—the world’s greatest deliberative body no longer debates. Committees are intended to provide members an opportunity to debate the merits of specific bills. However, today’s Congress is hostile to this type of deliberation. At best, committee chairs serve as the final arbiters and unilaterally resolve issues between other committee chairs. Second, shorten campaign periods. Non-stop campaigning wears down members and distracts them from the issues. Congressional members have meetings all day, attend fundraisers at night, then fly to their district to raise even more money. Although the perfect number may not exist, a number under 18 months, the typical campaign period, would help to improve performance. Third, implement a five-day workweek. Consider that it’s not unusual for the House to be in session just 145 days a year. A five-day workweek, in Washington, would provide members more time to deliberate bills and create effective legislation. In addition, the two chambers should coordinate schedules so both are in session at the same time. Fourth, increase Congressional staff. Federal spending is ten times larger than it was in 1975, but the House and Senate employ fewer staff than during that time. Last, reform, but don’t remove, the filibuster. In the Senate, at least 60 members must vote to end debate on a bill; a filibuster occurs when there are not enough Senators to reach that 60-vote threshold. Although removing the filibuster completely might make it easier to pass legislation, it would serve to increase partisanship. Because the mere threat of a filibuster can stop a bill in its tracks, a shift in the filibuster’s burden from the majority party to the minority party would improve the process. Currently, Senate rules require 60 votes to end a filibuster; instead, the rules should be altered to require 41 votes to implement a filibuster. Shifting the burden would make the filibuster more difficult to invoke, and used only in situations where the respective party felt it necessary to filibuster. If this week’s Supreme Court decisions on some of the nation’s most pressing issues—abortion, guns, climate change—have shown anything, it is that the U.S. needs a functioning Congress. These ideas might help.

Ian Bremmer’s Commentary on the U.S. After Roe v. Wade. Almost all Americans (90%) believe abortion should be legal in some circumstances, not in others—including a strong majority of both Democrats and Republicans. But that’s where the agreement ends. About 60% of Americans think abortion should be legal in all or most cases (mostly Democrats), while 40% say it should be illegal in all or most cases (mostly Republicans). Republicans have the bigger governance challenge here, primarily because 66% of Americans did not want to see Roe overturned. GOP candidates will now have to run on an unpopular issue, as they will be responsible for the change in outcomes. In addition, the ruling will leave moderate Republicans or those in swing states vulnerable to the far right. Just as some Democrats have been captured by progressives to support unpopular positions on “woke” issues like transgender rights and critical race theory, some of the loudest Republicans on social/cable media hold maximalist views against abortion that will undermine the party’s electoral viability. Democrats may have challenges with the issue as well, particularly if there is a significant upsurge in violence from pro-choice extremists. The clearest prediction is further erosion of American political institutions. The Supreme Court will be seen as much more politicized and will lose some of its legitimacy. Last week, in a Gallup poll, 25% of Americans said they had confidence in the Supreme Court, an all-time low. Concerns are now only growing that the 2024 elections will bring unprecedented political violence and risk a constitutional crisis. That’s not a civil war or revolution, but it does mean domestic political risk inside the U.S. is by far the most consequential among developed countries for the foreseeable future.

Eurasia Group: Supreme Court Ruling Tightens Requirements for Congress to Direct Regulation. The Supreme Court ruled that the Environmental Protection Agency (EPA) overstepped its authority by proposing emissions caps under the Clean Power Plan; the court ruled that federal agencies must point to specific Congressional direction when proposing regulations. The Court’s decision in West Virginia v. Environmental Protection Agency will limit the EPA’s authority to set new rules limiting carbon emissions under the Clean Air Act. More broadly, it is likely to limit regulatory actions from other agencies by requiring explicit Congressional direction before new rules are proposed. This has implications most immediately for the Securities and Exchange Commission’s (SEC) climate disclosure rules. The immediate impact of the ruling will be to restrict the government’s ability to limit carbon emissions for power generation and other sectors, making it significantly more difficult to meet emissions reduction targets set as part of President Biden’s climate agenda. For a White House already facing the likely failure of efforts to revive Build Back Better (BBB) climate legislation, this leaves little room to enact its environmental goals. For the U.S., already set to underperform its climate goals, the decision will increase the gap in climate performance between Washington and its allies, especially the EU. The court’s decision to avoid ruling on the EPA’s ability to determine the “best system” for emissions reductions does leave the door open for future EPA regulations to address emerging technologies. Some environmental advocates framed this as a “silver lining.” The ruling did not explicitly undo the ‘Chevron precedent,’ which would have more broadly limited agencies’ ability to interpret vague statutes when issuing new rules. Regardless, the decision is a signal that the Court will look to limit future regulatory action that is not more explicitly authorized by Congress, a setback for future claims of administrative power. Going forward, the Court will be less deferential to agency interpretations and look for specific Congressional authorizations for new regulations. This has clear implications for other agencies including financial regulation, workplace safety, issues like net neutrality, upcoming environmental rules, Security and Exchange Commission climate rules, and Federal Trade Commission attempts at new rule-making.

Implications of Uyghur Forced Labor Prevention Act (UFLPA) Many, Says Observatory Group. Last week, the Uyghur Forced Labor Prevention Act (UFLPA) officially took effect, six months after it was signed into law by President Biden. The legislation bans imports of Chinese goods or commodities linked to forced labor in Xinjiang, China. This new law is likely to have a significant adverse effect on the supply chains of several industries, as Xinjiang accounts for 45% of global production of solar-grade polysilicon, 25% of tomatoes, 22% of calcium carbide, 20% of cotton, 13% of wind turbines, and 5% of aluminum. Its principle of “rebuttable presumption” has made the compliance cost extremely high for American importers of any products from Xinjiang. In addition, the “rebuttable presumption” may become a powerful legal tool against other Chinese goods and companies while U.S.-China economic decoupling is ongoing. The law may also have implications for global institutional investors strategies, as human rights and geopolitics have become an important non-financial factor in their decision-making. So far, Chinese authorities have responded to the enactment of UFLPA only with strong rhetoric, but it cannot be ruled out that Beijing may retaliate against U.S. companies that comply with UFLPA. Enforcement of the law may also hurt U.S.-China collaboration on addressing the impact of climate change, as Xinjiang plays an important role in the manufacture of key energy renewables.

“We hold that Roe and Casey must be overruled,” Supreme Court Justice Samuel Alito in the Dobbs majority opinion, release.

There have been 17 Supreme Court Chief Justices and hence, 17 “Courts.” Supreme Court historians categorize eras in court history by the name of the chief justice presiding over the court and its sessions. The Roberts Court is the 17th Court on the books; the Jay Court was the first.

The Conference Board’s Consumer Confidence Index Decreased in June. The Index fell 4.5 points from May and now stands at its lowest level since February 2021. The Present Situation Index, based on consumers’ assessment of current business and labor market conditions, declined marginally, while the Expectations Index, based on consumers’ short-term outlook for income, business, and labor market conditions, decreased sharply and is at its lowest level since March 2013. Consumers’ grim outlook is driven by increasing concerns about inflation. Expectations are now below a reading of 80, suggesting weaker growth in the second half of 2022 as well as a growing risk of recession by yearend. 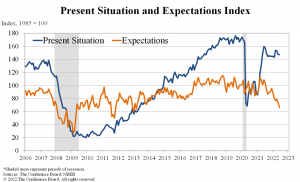