Even though hometown hero Katie Ledecky’s gold medal in the first ever women’s 1500 meter freestyle swimming event was big news for those of us from Bethesda, MD, there is no doubt that the largest Olympic headlines this week were reserved for Simone Biles’ shocking exit from the gymnastics competition. The reigning Olympic all-around champion cited mental health reasons for pulling out, and with the benefit of hindsight, it is easy to see that many of the warning signs were there. In comments before the games, she spoke of the weight of the world being placed on her shoulders, and her withdrawal was eerily similar to Japanese tennis star Naomi Osaka’s decision to exit from the French Open earlier this year. Immediately following Ms. Biles’ withdrawal, former Olympian Michael Phelps, an advocate for athletes’ need to protect their mental and emotional health, said that “it broke his heart” when Simone withdrew from the competition over the pressure of the Olympics. “The Olympics is overwhelming,” he said, “I think athletes…we need someone who we can trust, somebody that can let us be ourselves and listen. Allow us to become vulnerable.” He’s correct; however, this need is not just limited to elite athletes. Search “American loneliness” on the Internet, and you’ll find a long list of recent studies and surveys. While the Coronavirus pandemic has certainly intensified the strain placed on mental and emotional health and been a factor in increasing loneliness, the silver lining to all of this may be that it is no longer taboo to speak about mental health. In fact, the changes I’ve seen over the past 15 years through my work with post-9/11 wounded veterans has been nothing short of dramatic. For our servicemen and women, an admission of post-traumatic stress disorder (PTSD) has gone from the unthinkable to a recognition that admission is the first step to recovery. So, what does this all mean for those of us at Sumitomo; the truth is that the mental health of employees is a crucial determinant to the overall success of the organization. According to the National Institutes of Health, poor mental health and stressors in the workplace can be a contributory factor to a range of physical illnesses such as hypertension, diabetes, and cardiovascular conditions. In addition, poor mental health can also lead to employee burn-out, and seriously affects an employee’s ability to contribute meaningfully in both their personal and professional lives. The data shows that mental health is a leading cause of employees dropping out of work place, and it is estimated that more than half of work-related disabilities are related to mental health, with nearly 40% of workplace absence attributable to some form of mental or emotional distress. Mental health problems have an impact on employers and businesses directly through increased absenteeism; negative impacts on productivity, profits, and morale; as well as an increase in costs. In addition, work-related stress is a major cause of human error. Physicians tell us that work-related stress can also manifest as heart disease, back pain, headaches, gastrointestinal disturbances, and other minor illnesses, in addition to psychological effects such as anxiety, depression, and loss of concentration. While each of us needs to recognize the clear distinction between pressure, which can be a motivating factor, and stress, which can occur when pressure becomes excessive, I applaud SCOA’s decision to implement the simple, yet mindful, ‘Virtual Watercooler Sessions’ as a needed outlet for emotional and mental health.

Trade Analyst Laura Chasen: Carbon Tariffs Now on Washington’s Agenda. Following the EU’s announcement of similar plans, the Biden administration and Democrats in Congress are moving to impose carbon border adjustment mechanisms (CBAMs) or carbon tariffs. CBAMs explicitly link trade and “climate policy,” a White House and USTR priority.  As Sen. Coons (D-DE) explained, a CBAM—or BCA (Border Carbon Adjustment)—“is a trade tool that levels the field for domestic manufacturers by imposing a fee on carbon-intensive products when they reach the border” and ensures that the U.S. is “at the table for reframing trade around climate.” Sen. Coons and Rep. Peters (D-CA) unveiled a bill to impose tariffs on imports of certain products from countries that do not apply carbon emissions standards similar to the U.S. Coons and Peters want to attach these so called “polluter import fees” to the reconciliation bill Democrats hope to pass by the end of the year. The proposed tariffs would begin in 2024 and hit petroleum, natural gas, coal, aluminum, steel, iron, and cement, all carbon-intensive products for which domestic makers face import competition.  Exempted would be countries that do not impose CBAMs on American exports but have adopted climate regulations “at least as rigorous” as those in the U.S.

AEI Contributor Henry Olsen in The Washington Post: Where is the Republican Party Headed?  While many Democrats see the GOP flirting with authoritarianism, others, including the American Enterprise Institute’s (AEI) Henry Olsen see a less ominous contest over policy priorities. Olsen has laid out five factions vying for influence over the party’s direction, with the crux of contention being how sharply to break from the interests of big business. The Old Guard are those like Rep. Liz Cheney (WY) and Sen. Pat Toomey (PA) who remain wedded to the free-market, pro-business orthodoxy that prevailed from the Reagan revolution through Mitt Romney’s 2012 presidential campaign. The Adapters, including former U.N. Ambassador Nikki Haley, former vice president Mike Pence, and Sen. Ted Cruz (TX), largely want to keep things as is, although they are open to experimenting with populist shifts on immigration and China policy. The Searchers would like to rebrand the GOP as the “party of the working class” but are deeply unsettled about how to translate ambition into policy. The Reformers, including Sen. Marco Rubio (FL), Sen. Tom Cotton (AR), and Sen. Josh Hawley (MO), are on board with a populist shift, and have been bold enough to craft a substantive policy agenda to go along with it. The final group, The Prophets, is the smallest faction, and includes just one person, Ohio senatorial candidate J.D. Vance. If his campaign were to be successful, Olsen believes others would be sure to join in launching direct attacks on libertarianism and calling for tax hikes on companies that move jobs overseas.

Eurasia Group: The End of President Biden’s Honeymoon is Showing in the Polls. Two recent polls indicate that President Biden’s honeymoon may be ending. A Gallup poll showed Biden with his lowest approval rating yet (50%), and an ABC News/Ipsos poll found a steep drop in the number of Americans optimistic about the direction of the country, down to 45% from 64%. Although the President’s polling averages remain fairly positive for such a polarized environment, challenges on the pandemic and economy persist. In addition, spiking inflation supports GOP criticism that Democratic spending plans are contributing to rising prices and hurting consumers. While progress on a bipartisan infrastructure bill could offer political support, the eventual pivot to a Democrats-only reconciliation bill could undermine President Biden’s image as a bipartisan dealmaker.

“We have [to] meet people where they’re at some times.”

— Michigan State Rep. Jewell Jones (D), when asked about $221 in campaign spending at a strip club.

Three future U.S. politicians appeared the last time the Summer Olympics were held in Tokyo. Former Rep. Jim Ryun (R-KS) qualified at age 17 for the 1964 Games but did not medal in the 1500-meter; former Sen. Ben Nighthorse Campbell (R-CO) was captain of the U.S. judo team but suffered an injury and did not medal; and former Sen. Bill Bradley (D-NJ) was a member of the gold medal winning basketball team. 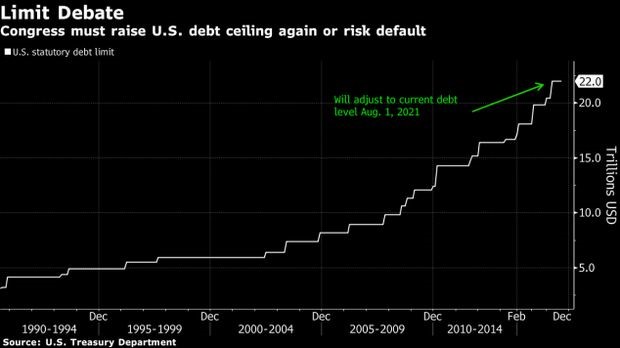