During a CNN Town Hall last week, President Biden said that his multi-trillion dollar infrastructure packages would, in fact, reduce inflation. In response to a question about whether pumping additional cash into an already flush economy would exacerbate price increases, the president replied, “No, no…” While former CBO Director Douglas Holtz-Eakin agrees that the bipartisan infrastructure package would not cause an increase in inflation, he does believe Democrats’ proposed $3.5 trillion social infrastructure plan would increase the demand for goods and services, increasing inflationary pressures. The primary difference being that the bipartisan infrastructure plan, which focuses on core infrastructure, increases supply; what’s more most of the spending in the bipartisan proposal would take place after 2022 and after current inflationary concerns will have likely subsided. To gain some clarity on this issue, the Washington office reached out to the Conference Board, among the key take-aways from our discussion were:

It would seem clear that inflation remains an important issue for companies to watch, particularly for businesses that cater to households. In addition, many businesses will continue to contend with a recovery that remains highly uneven, with consumers in some regions eager to spend, while other key economies are still struggling to contain COVID-19 amid new variants, vaccine shortages, and supply-chain bottlenecks.

Eurasia Group/Capital Alpha: Momentum Builds for Bipartisan Physical Infrastructure Bill: Since Wednesday’s failed vote, a core group of 22 Senators has continued working on the bipartisan infrastructure bill. The aim is to reach a deal and set up votes next week. While the odds of success for this approach have risen to 25%, any deal could still fall apart, depending largely on reactions from conservative or progressive groups. Whether a deal succeeds or fails, the progress the two sides have made thus far on both the spending and budget sides increases the odds for additional spending to pass later this year through a partisan reconciliation bill.  Expectations are that roughly $3 trillion in partially tax-financed spending will pass through either a two-step process involving the bipartisan bill or through one large reconciliation bill after Thanksgiving. However, analysts from Capital Alpha see total spending to be about half this figure in the $1.5 trillion range.

Eurasia Group: Republicans in Good Shape Heading into 2022 Mid-term Elections: The GOP should benefit from significant tailwinds heading into the 2022 mid-term elections, which make them likely to win control of the House of Representatives (a 70% probability). Republicans also have a slightly better than average chance of winning the Senate (a 55% probability). One reason: 7 of the 8 battleground states where the 2020 presidential election was decided by 4 or fewer points have Senate races in 2022, and outcomes will depend more on candidate recruitment than structural factors. While President Biden remains popular with Democrats and independents, due to his handling of the pandemic and the economy, other issues such as crime, inflation, and immigration are weak spots and may emerge as top electoral concerns.

“Not a lot of people think that we could have won…In fact, I think about 40% of the people still don’t think we won. You understand that, Mr. President?” 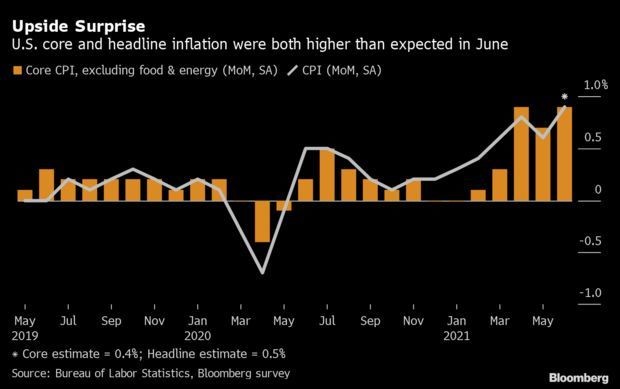