“Country Roads, Take Me Home…To the Place I Belong…West Virginia, Mountain Mama…Take Me Home, Country Roads.” The iconic John Denver song holds a special place for me. Few people know, but the country road referred to in the song is actually Clopper Road in suburban Maryland. My wife and I raised our two kids just a few blocks off Clopper, and we literally drove that road every day. The state, more correctly, the state’s senior senator, Joe Mancin is making headlines this week due to his agreement with Senate Majority Leader Schumer (D-NY) to revive the Build Back Better (BBB) bill, now referred to as the Inflation Reduction Act. The deal caught everyone in Washington by surprise, and analysts, consultants, and lobbyists are still trying to digest what the $790 billion, 725-page bill means for energy, health care, and deficit reduction. It was just minutes after I hit send on a memo explaining how the original BBB had become just a shell of its former self, when news of the new agreement hit. Beyond the near absolute secrecy in which the deal was negotiated, the more intriguing questions might be about what forces, if any, led to Sen. Manchin’s (D-WV) change of heart and the impact these forces might have on politics and policy going forward. Mehlman Castagnetti Rosen and Thomas point to four “counter-revolutions” that are driving politics and policy today (Backlash). The “counter-revolutions” range from the fairly obvious—the impending revolt against unified Democratic control of Washington in November’s midterms—to the less conspicuous—the growing headwinds to be faced by the ESG movement (“wokelash”), the end of the era of easy money, and the shakeup of longstanding tech business models amid tension with China and increased regulation in Europe. To navigate these forces, Mehlman Castagnetti recommend that companies:  (1) Stay Engaged: Congress is more productive than commonly believed and the death of bipartisanship is somewhat exaggerated; (2) Think Long-Term: broader trends—such as the energy transition, U.S.-China competition, accelerating innovation, and expanding diversity—outlast short-term backlashes; and (3) Learn and Improve on the mistakes other companies have made, as an example Disney’s fight with Florida Governor DeSantis. To discuss any of these forces or the new Inflation Reduction Act, please do not hesitate to contact the Washington office directly.

Hawkish Fed Will Spark Recession in Late 2022 Says Conference Board. As expected, the Federal Reserve hiked interest rates by 75 basis points, the fourth consecutive increase this year and the second 75 basis point hike in a row. The move raises the Fed Funds range to 2.25%-2.50%, pushing the rate out of the “accommodative” range and into “neutral” territory. Chairman Powell said that a 75 basis point hike is possible at the next FOMC meeting in September, but that it was by no means guaranteed. However, he did state that the Fed expects additional tightening to be needed to achieve price stability. Now that the central bank has pushed policy rates into “neutral” territory, it will make future rate decisions on a meeting-by-meeting basis. The Conference Board expects the Fed to raise rates above 3% by the end of 2022 and that additional rate hikes will drive rates toward 4% in 2023, pushing the U.S. economy into recession toward the end of 2022. Taken together, the path of interest rates points to increased costs of capital for firms and the potential for reduced investment in capex and IP. The rising recession risk also suggests businesses may reverse hiring plans, but the continuation of labor shortages in some industries should keep the unemployment rate from rising materially.

The Eurasia Group Asks Whether Revival of the BBB Kills Trust in the Upper Chamber. Senate Majority Leader Schumer (D-NY) pulled a rabbit out of his hat Wednesday night announcing an agreement with Senator Manchin (D-WV) on a $740 billion bill that gives $433 billion to green energy and health care and $306 billion to deficit reduction. The deal involved hoodwinking Republicans who thought they had successfully ended prospects of tax increases this year, clearing the passage of the CHIPS+ bill in the Senate. The deal’s announcement will hurt the trust that is already in short supply in the Senate but has previously been credited with making the institution run. Initial assessments for the bill’s eventual passage still look good—the bill has a 75% chance, and perhaps higher, of becoming law since it provides a significant investment in fighting climate change without crossing any major tax redlines for vulnerable Democrats. With several progressive lawmakers already endorsing the bill, all eyes are on Senator Sinema (D-AZ) and a handful of New Jersey lawmakers who may have cause to reject the bill over the carried interest tax and the state and local tax deduction cap. It would be very surprising if these few lawmakers derailed this deal, or could not find accommodations to make it work, at this point. Going forward, attendance, the result of Covid diagnoses, could be the biggest risk to the deal because Democrats will need all 50 Senators in the chamber for a final vote. Given recent trends, it seems likely that at least one or more members could be forced to quarantine over the next ten days before the Senate breaks for recess. However, the bill’s deadline remains September 30.

Vulnerable Senate Democrats are Outperforming Biden by Substantial Margins. Morning Consult polling shows that vulnerable Senate Democrats in Arizona, Colorado, Georgia, Nevada, New Hampshire, and Washington are all running double digits ahead of President Biden in state-level approval, a positive signal for Democrats concerned over the impact of the president’s record-low polling. The readings fit with analysts’ views that while Republicans are highly favored to retake the House (90% odds), the Senate will be a more closely run contest with a narrower chance of a Republican majority (60% odds). While the generic ballot continues to show Republicans with an advantage in most of the key Senate races, state-wide races are not entirely about generic Republicans; they are at least in part about the nominees. In another sign of hope for Democrats in the Senate, Republican nominees in Georgia and Pennsylvania are significantly less popular than the generic Republican there.

Politico Reports that the U.S. Became the Top Global LNG Supplier in the First Half of 2022. According to the Energy Information Administration (EIA), the U.S. has become the world’s largest LNG exporter, delivering an average of 11.2 billion cubic feet a day to overseas buyers, a dramatic achievement for a country that only began shipping gas in significant quantities in 2016. The U.S. LNG industry, situated primarily along the Gulf Coast, now has the capacity to ship 11.4 billion cubic feet of gas a day, enough to beat Qatar and Australia and take the top spot. The U.S. first started shipping gas out of the lower 48 states in 2016 with the opening of Cheniere Energy’s Sabine Pass facility in Louisiana. Natural gas exports have grown as new projects that had been under construction for years came online. The capacity increase comes at a critical time for buyers in Europe, who are scrambling to replace deliveries from long-time supplier Russia amid Moscow’s war with Ukraine. With Russian gas reaching fewer customers, prices for the commodity have soared and helped the U.S. become a larger player in the global market. American LNG exports grew for three reasons—increased LNG export capacity, increased international natural gas and LNG prices, and increased global demand. Interestingly, the industry’s success has become a political football. While the White House has welcomed the added diplomatic muscle with European allies U.S. gas shipments have provided, environmental groups have become increasingly concerned that the increased use of natural gas is leading to rising methane pollution. At the same time, the growing volume of natural gas flowing overseas is pushing domestic prices higher.

“We’re not going to be in a recession,” President Biden.

“I don’t want to answer that question. He’s the president. He has the right to run for a second term,” Rep. Cori Bush (D-MO) when asked if she wants to see President Biden run for reelection.

President Theodore Roosevelt was the youngest person to become president at age 42.

The Conference Board’s Consumer Confidence Index decreased in July, following declines in May and June; the Present Situation Index, which is based on consumers’ assessment of current business and labor market conditions, also fell; and the Expectations Index—based on consumers’ short-term outlook for income, business, and labor market conditions—ticked down. The figures matter because July saw consumer confidence decline for the third consecutive month, with the Index standing at its lowest level since February 2021. While the Expectations Index was little changed from June’s 9-year low, July saw a sharp drop in the Present Situation Index—a sign growth has slowed to start Q3. As the Fed raises rates to rein in inflation, purchasing intentions for cars, homes, and major appliances have pulled back. Looking ahead, inflation and additional rate hikes are likely to remain strong headwinds for consumer spending and economic growth over the next six months. 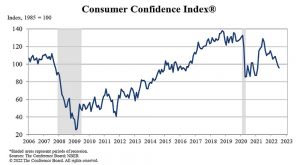