After two years of Covid lockdowns and travel restrictions, my college golf teammates and I traveled to Southwest Ireland for a once-in-a-lifetime bucket list vacation. We last teed it up as a team more than 35 years ago, and it was a chance, to not only play some of the finest golf courses in the world, but also reconnect as a group with three I consider among my closest friends. Most of the talk over pints of Guinness was about the round we just played, old times from our college days, and, of course, family. We talked golf and on occasion even ventured into politics. And that’s when a pair of 3-letter names—LIV and MBS—both linked to Saudi Arabia came up. As you may know, the LIV is the breakaway Saudi-backed league run by golfing legend Greg Norman that is poaching players from the U.S. PGA Tour and other professional golf tours around the world. MBS are the initials of the defacto Saudi leader who is modernizing the Kingdom, but who also ordered the hit on Washington Post columnist Jamal Khashoggi and has jailed other political reformers. It just so happened that at the same time we were visiting Ireland, the golf world was set in St. Andrews, Scotland, for the British Open, and President Biden was on his way to Jeddah, Saudi Arabia, to meet with MBS, ostensibly to promote goals such as strengthening Saudi-Israeli ties, enhancing regional stability, and combatting growing Chinese and Russian influence. For both topics, LIV and MBS, our discussions were about the clash between ideals and interests and under what circumstances, if any, ideals should be sacrificed in the name of long-term interests. The four of us, now all well into our 50s, each recognized that in a complicated world, moral purity is all but impossible to accomplish, and ideals and interests are often at odds. We questioned whether professional golfers should turn their backs on the PGA Tour and join the LIV Tour simply for the enormous sums of guaranteed money the Saudi-backed league offers, or should something deeper be at play when there are plenty of other avenues for these athletes to make millions of dollars honing their craft? More complicated was discussion over President Biden’s decision to back track on his campaign promise to make Saudi Arabia an international “pariah.”  Certainly, meetings between leaders of important nations can be worthwhile even if they yield no immediate results, but did President Biden’s “fist bump” with MBS rise to the level of a Truman-Stalin or Nixon-Mao moment, or was it simply an effort to cajole the Kingdom into producing more oil because gas prices are high and a difficult election is on the horizon? While I can say for certain that none of us will be buying any golf gear adorned with a LIV logo, there was a debate over whether President Biden’s trip actually damaged U.S. security interests or was simply a missed opportunity on oil, on Yemen, and on Iran.

Conference Board Sees Global Economy Slowing and Recession Risks Rising. Emerging economies grew rapidly in 2021—rebounding by an estimated 6.7% annual rate following the pandemic-induced recession in 2020. However, GDP growth is likely to moderate to 2.9% in 2022. It is forecast that U.S. economic growth will slow over the course of this year and a shallow recession will occur in late 2022 and early 2023. Persistently high inflation is driving a rapid monetary policy tightening that will trigger a recession. European economic activity indicators suggest resilient momentum in the first half of 2022, despite the decline in consumer confidence and the sharp fall in Purchasing Manager Indexes in June. In the near term, GDP growth is expected to slow significantly towards near stagnation. The Conference Board downgraded the 2023 Euro Area GDP forecast to 1% growth following 2.7% growth in 2022. In China, despite signs of recovery, weak demand remains a risk. The full text of the Conference Board’s Global Economy Watch newsletter is available from the Washington office.

Eurasia Group Sees White House Eventually Declaring a Climate Emergency. President Biden is increasingly likely to declare a national emergency on climate change. To date, the White House has held off on doing so to avoid blowing up negotiations to revive Build Back Better (BBB) legislation with fossil fuel-supporting Senator Joe Manchin (D-WV). Now that the climate bill is (mostly) dead, the administration faces fewer hurdles to declaring an emergency. Declaring a climate emergency does not itself impose major policy changes, but it opens the door for President Biden to use other emergency authorities to redirect federal funding, limit fossil fuel production on federal lands, and curb emissions. Although unlikely in light of the Ukraine crisis, in the most extreme scenario the White House could curtail oil and gas exports and current fossil fuel output. The timing of an announcement remains uncertain, and the administration appears to be holding off in order to keep open the last bit of negotiating room with Manchin; however, a climate bill is unlikely to come together, and the president is likely to declare a climate emergency ahead of November’s midterm elections (an 80% probability).

After Sen. Manchin (D-WV) Played Spoiler…Again…The Observatory Group Predicts What Comes Next. Last week’s decision by Senator Joe Manchin to block the latest version of tax and climate change legislation will force Congressional Democrats to scale back their economic agenda even further; however, it could open the door to advance long-stalled legislation that would provide funding for the semiconductor industry. Sen. Manchin’s announcement that he would not back even a slimmed down climate change/tax bill means that Democrats will employ special budget reconciliation rules to pass a much narrower bill that focuses on health care issues. That bill will give the government authority to negotiate directly with drug companies on the price of certain drugs in federal programs and will provide for a temporary expansion of enhanced subsidies under the Affordable Care Act due to expire at year-end.  Sen. Manchin has indicated support for that approach, and it should be expected that Democrats will move to pass such legislation via a party-line vote in coming weeks. The demise of the broader climate/tax legislation may have removed roadblocks to another agenda item—a bill providing $52 bn in funding to the semiconductor industry. While this legislation could also include limited measures aimed at China, it appears it will omit the more contentious anti-China measures, which were part of earlier versions of the same legislation—namely the Senate’s US Innovation and Competition Act (USICA) and the House COMPETES act.

Observatory Group Sees 75bp, Possibly 100bp, Rate Hike Next Week. Although a 75 bp hike next week is most likely, the odds of a 100 bp rate hike are being underestimated; they stand at around 35%. Because a 100 bp increase will be discussed seriously, it cannot be dismissed that the debate converges on the bigger number, especially since the main reservation about 100 bp is the lack of precedent rather than lack of a compelling economic case. The developments that triggered speculation of a 100 bp hike will resonate in the policy debate beyond next week. In fact, the implications of the recent economic and inflation data (including that the real policy rate has barely budged after 150 bp in rate hikes) are for the September and November FOMC meetings—the Fed cannot move to a lower gear on rate hikes, but will continue debating 50, 75, or even 100 bp moves. The formal guidance will continue to refer to ‘ongoing increases’ in the Fed Funds rate target range and Chair Powell will suggest that the debate will remain centered around 50-75 bp rate increases until inflation slows (meaning broad demand-driven price increases decelerate) for several months. However, the Chairman will not rule out an increase of any particular size. While some analysts argue that recently declining retail gasoline prices will weigh heavily on the policy debate, one should remain skeptical. The lower gas prices, if sustained, are good for the consumer and good for inflation expectations, especially short-term expectations, but they are not a sign of any relief from demand-side inflation pressures. If anything, concerns about those pressures have intensified since the June FOMC meeting as large price increases have spread to a broader array of goods and services.

“If we ever needed a visual reminder of the continuing grip oil-rich autocrats have on U.S. foreign policy in the Middle East, we got it today. One fist bump is worth a thousand words,” Rep. Schiff (D-CA).

“If gay couples want to be as happily or miserably married as straight couples, more power to them,” Rep. Mace (R-SC 01) on voting for the Respect for Marriage Act.

President Biden’s trip to the Middle East may exacerbate tensions with the progressive wing of his party, but will not substantially erode his political standing; economic and domestic social issues will remain top of mind for voters heading into midterm elections. 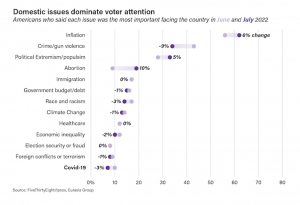