Have you made your New Year’s resolution yet? Wait, let me guess: eat better, get more exercise, and knock a couple items off your bucket list…oh yeah, and be more mindful of others. Right? Me too. This year, when cruising the Internet for a new, novel resolution, I came across an interesting article about Americans’ report of frequently feeling significant pain when compared to those in 30 other countries. In fact, more than one-third of Americans said they felt pain often or very often; for comparison, the figure was just 18% in Japan. Depression was up significantly too, with the highest increases in new cases seen in North America. In a time of unprecedented wealth, freedom, technological progress, and medical advancement why does it appear that Americans seem to be unhappier and in more pain than ever? Counterintuitively, the answer, it seems, is that there is more access to pleasure than ever before, and a scientific understanding is developing about the manner in which our constant pleasure-seeking may actually be causing us physical pain. The underlying explanation involves the notion of neuro-adaptation: repeated exposure to the same, or similar, pleasure stimuli over time causes the deviation to the side of pleasure to get weaker and shorter and the after-response to the side of pain to get stronger and longer. With repetition, we need more of our drug, or activity, of choice to produce the same effect. In a sense, we have lost sight of the importance of feeling the full range of human emotions, and of understanding that boredom, sadness, and anger are all part of life. One implication is that we have stopped training our children to handle the full spectrum of emotions. Parents rush to fix every problem, solve every complaint, and constantly entertain, training kids to jump from one pleasurable experience to another. By the time these children reach adulthood they are used to only mountains, not valleys. It may be a leap, but a similar affect has infected our politics. Today, we reach for only those news sources, studies, and thought pieces that validate our own beliefs. If you don’t believe me look at how today’s anniversary of the riot at the Capitol was covered. For supporters of President Trump, today is a media stunt, a contrived anniversary of an insignificant event boosted by Democrats and the press for exploitation in a cynical attempt to advance progressive priorities. For opponents of the former president, today was about remembering, and never forgetting, on the level of a 9/11 or Pearl Harbor. It was the day a sitting president incited a mob to attack Congress in a desperate attempt to overthrow a free and fair election. It was an insurrection and an attack on democracy itself. Such a bipolar response could only result from collective efforts to avoid pain and seek pleasure; to search and internalize only that information which confirms deeply held beliefs. To address pain, therapists are now advising patients to immerse themselves fully in the life they’ve been given, to stop running in an effort to escape, and instead to turn and face directly whatever it is confronting them. To address conflicts facing your office, resolve to utilize Washington’s Government Affairs’ team to directly address the political, legislative, and regulatory issues your business faces.

Could Asset and Credit Bubbles Burst in 2022…The American Enterprise Institute (AEI) Says, “Yes.” Ironically, accurate forecasting has not been economists’ strong suit. In 2008, there was a failure to foresee the Great Recession despite signals that U.S. housing and credit market bubbles were about to burst, and in 2021, with few exceptions, economists failed to anticipate that inflation would rise to a forty-year high. 2022 may be another year in which economists are caught flat-footed. Although the Fed has hinted it may begin to raise rates as early as March, economists are focused on inflationary risks to the economy, rather than the greater likelihood that asset price and credit market bubbles will burst once rates begin to rise or once there is a slowdown in China. What’s more, the world debt to GDP ratio increased 35% during the pandemic to an all-time high of 350%. The real risk is that 2022 could be a year of economic recession rather than 1970s type inflation. Heightening this risk is that today’s bubbles have been premised on the belief that ultra-low interest rates and strong economic growth would last indefinitely. These assumptions could be stymied should the Fed raise interest rates aggressively or should China’s property sector problems cause its economy to slow abruptly. At a time when inflation is running at almost 7%, the Fed has, so far, maintained its near zero bound policy rate; the implication being that in 2022 the Fed will need to act aggressively just to get rates back to positive levels in inflation-adjusted terms. A mistake many economists are making is taking comfort in the fact that U.S. banks are better positioned to weather the bursting of asset price and credit market bubbles than they were in 2008. This blinds them to the degree to which the non-bank part of the financial system (hedge funds, private equity funds, insurance companies etc.) is vulnerable to the bursting of those bubbles. All this could set up the financial system for a considerable amount of stress. Hopefully, luck will rule the day and today’s asset and credit market bubbles will not burst; however, with clues pointing in the opposite direction, policymakers should be making contingency plans.

Where Does the Republican Party Stand Heading Into the 2022 Midterm Election Year…The Eurasia Group Says President Trump is Still in Charge of the Party. While Democrats struggle to bridge internal divisions, Republicans continue to rally around former President Trump as the figurehead and ideological center of the party. In fact, 60% of Republican voters believe President Trump’s claim that the 2020 election was stolen, and his net approval among Republicans, 76%, has barely moved over the last year, while former Vice President Pence and Senate Republican Leader McConnell saw their favorability drop sharply after January 6th. The former president is using this power to influence Republican Gubernatorial, Senate, and House primaries to elevate allies over more traditional Republican candidates; of the ten House Republicans who voted to impeach: two have quit; three, including former Republican Conference Chair Cheney, face Trump-endorsed primary challengers; and the remainder lay low in hopes of avoiding Trump’s wrath. Republican Governors and State Legislatures have largely embraced both Trump’s claims of a stolen election and a 2022 election strategy hinging on establishing control of election systems. Mr. Trump’s hold on the Republican party shows no signs of being undermined or dented by the fallout from January 6th; indeed, the effect of calls to blame Trump, such as the one delivered this morning by President Biden, seem only to serve to harden Trump’s support among his base. This November, Republicans will almost certainly win back majority control of the House of Representatives—and possibly the Senate. One of the Eurasia Group’s top-ten risks of 2022 is that Democrats could view this outcome as the illegitimate result of a voter-suppression campaign, and Republicans might see the victory as further evidence of 2020 election fraud. With the GOP in control of the House, Biden’s impeachment might lead the GOP agenda and public trust in American political institutions will take a large hit.

Have Americans Reached a Tipping Point on National Mandates…Zogby Strategies Believes So. A new Zogby Strategies poll foreshadows 2022 as a year of backlash against national mandates. Regarding COVID-19 vaccine mandates, 53% prefer personal choice to 37% who want government mandates. The poll also asked respondents whether it is “right or wrong to disobey mandates from the President”. Overall, respondents were split, with 39% believing it is right to disobey vs. 36% who say it is wrong. A look at party identification reveals more Independent voters favor disobeying Presidential mandates—42% to 31%; for Republicans, it’s 49% to 26%; and for Democrats, 26% say it’s ok to disobey, while 49% believe it’s wrong. With both Republican and Independent voters in favor of going beyond challenging and opting for disobeying mandates, Democrats should take this as a signal that national mandates may not bode well for the upcoming mid-term elections. The takeaway: two years into the pandemic, the data reveals politics is still local as voters have less trust in federal mandates. In addition, if there is more push for national mandates from federal authorities, expect harder push back from Republican and Independent voters, as well as most age groups and the college-educated.

“It is snowing in D.C…that never happens! And of course, I love it! But I also love that it’s a sign of good things.”

Sen. Kaine (D-VA) after finally arriving at the Capitol for votes after being trapped on I-95 in a snowstorm.

“This political theater is all just a distraction for the fact Biden has completely and totally failed…our country no longer has borders, has totally and completely lost control of Covid (record numbers), is no longer energy independent, inflation is rampant, our military is in chaos, and our exit, or surrender, from Afghanistan was perhaps the most embarrassing day in the long and distinguished history of the United States…and so much more.”

Former Senate Majority Leader Reid will lie in state at the U.S. Capitol on January 12, becoming the 14th dignitary to receive the honor since 2000. The frequency of public figures lying in state at the Capitol has increased over the past two decades. In the 1980s-90s it was four, and in the 1960s-70s it was eight.

Corporations have resumed donations to Republicans who objected to certifying the 2020 presidential election results, betting that the GOP will retake the House in the midterms. PACs for business interests, including Koch Industries, Valero, UPS, and Lockheed Martin, together have given $16 million to the 147 Republican members who voted against certifying Joe Biden’s victory. The explanation: corporations are more practical than ideological. 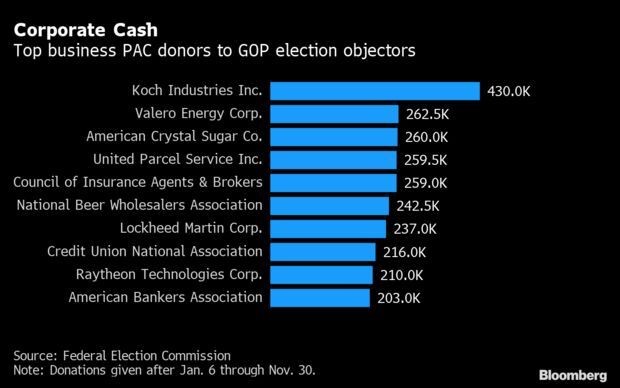