My wife isn’t into politics. Like many Americans, she pays attention every four years during those crucial months between Labor Day and Election Day. As the Creative Director for a major health care company, a martial artist, and most importantly, a mother, she doesn’t have the time, nor the interest, to track the ups and downs of the BIF or BBB. When I mentioned to her that Sen. Manchin (D-WV) had just killed the Democrats’ reconciliation bill, on Fox News no less, she greeted me with a shoulder shrug. Her reaction was telling, particularly when paired with her answer to the question of which entity she would choose—Federal Express or the U.S. Postal Service—if she absolutely needed to guarantee that a package would arrive overnight. For her, the federal government has long since been an institution she could count on to deliver quality service. She’s not alone. A recent Gallup poll shows that Americans’ trust across institutions, including government entities, resumed its decline in 2021. For instance, just 38% trust “The Presidency” and only 12% trust Congress a great deal; both figures are down 1% from 2020. Viewed one way, an argument could be made that the Build Back Better (BBB) reconciliation bill was always a long shot in a tight Congress and 50-50 Senate, particularly with a president whose approval ratings are underwater. Viewed another way, grassroots support for the BBB would have swelled if there were widespread trust in the federal government’s capacity to address complicated national problems with competence. Although my wife may not know that Social Security’s trust fund is projected to be exhausted by 2037, she can relate the general sense that the federal government should put previous commitments in order before approving new entitlement programs that may or may not be fully funded. If Democrats, Republicans, progressives, or conservatives want to earn the underlying trust of the electorate in order to move major legislation, they should first focus on those issues that move Americans—inflation, the Coronavirus, rising crime—and prove that they can make a positive difference. As an aside, the peak of trust in the federal government was 77% in October 1964. Not incidentally, this was a month before the landslide re-election of President Johnson, which served as a mandate for the last major expansion of the welfare state.

Eurasia Group: U.S.—A year in review of U.S. Politics and What to Expect in 2022. President Biden finishes his first year in office in a much weaker position than he started, but his two biggest problems are outside of his control: the lack of a governing majority and Covid-19. His biggest success of the year will likely be remembered as a mistake—passing the $1.9 trillion American Rescue Plan (ARP) in March, which contributed to the overheating of the economy and hurt the political will to pass the Build Back Better (BBB) bill. Failing to pass the BBB will hurt President Biden, who has been the favorite to be the Democratic nominee for president in 2024. In a scenario where Democrats lose their Congressional majorities in 2022 (a high probability), without having advanced any major long-term policy priorities (a growing probability), he would become the underdog. Electoral politics aside, inflation will be the key policy story in 2022. Higher prices and the threat of rising interest rates do not make for a friendly economic environment. At the same time, the pandemic serves as a clear sign that the White House has struggled to deliver on its campaign promise to help American life reset to a pre-Trump baseline. Polarization remains a dominant theme in American politics, and the president risks being seen as contributing to the problem by pushing a super-sized version of the progressive platform he ran on. It would be a nearly impossible task for any president to fight the current tide of macro political trends; to get there it will require a larger majority, or a willingness to break the rules.

Trade Analyst Laura Chasen: Japan Resists U.S. Tariff Offer. Last week, Washington offered Tokyo a specific proposal for settling the dispute over Section 232 tariffs on Japanese steel and aluminum. Japan rejected it. While the two countries have been negotiating bilateral steel and aluminum trade since at least the U.S. and EU reached their Section 232 settlement, recent U.S. statements have focused on a desire for a deal addressing excess capacity and carbon emissions more than the tariffs themselves. The U.S.’s proposal was modeled on the tariff-rate quota system set up for the EU, but Tokyo resisted, insisting that there is no basis for the “national security” tariffs and they should simply be removed. What’s more, Japan does not want to enter a deal that violates WTO rules, as the managed trade agreement based on voluntary quotas that was reached with the EU appears to do. There remains some speculation that Tokyo may be resisting a deal while it tries to pressure the Biden administration to reconsider joining the CPTPP; such a step has been ruled out by American officials at least until after next November’s elections. Japan’s demand for elimination of the tariffs is unlikely to be met, as it would be politically difficult for President Biden and upset other allies who accepted quotas. Regardless, Japan is holding out for something better than the current offer. A possible compromise could involve choosing a quota cap that is larger than the U.S. has offered. A deal could also include a surge monitoring mechanism allowing a tariff snap-back if imports spike. Japan lacks the leverage the EU had because Tokyo never imposed retaliatory tariffs. In fact, it was the European threat to double tariffs late this year that spurred the Biden administration to reach a deal. With the Biden administration promising an “Indo-Pacific Economic Framework” to better integrate the U.S. economy with the region, an added incentive to settle major trade disputes with allies exists.

“I knew where they were and I knew what they could and could not do—they just never realized it because they figured, surely to God we can move one person. Surely we can badger and beat one person up, surely we can get enough protesters to make that person uncomfortable enough they’ll just say, ‘OK, I’ll vote for anything, just quit,’”

In 1870, President Grant declared Christmas a national holiday. The decision was an attempt to unite the North and South.

The pandemic pushed U.S. life expectancy down to 77 years in 2020. The drop was 1.8 years from the 2019 figures, with bigger declines for men than women. In 2020, Covid-19 became the third-largest cause of death, accounting for more than 10% of the 3.4 million deaths registered in the year. 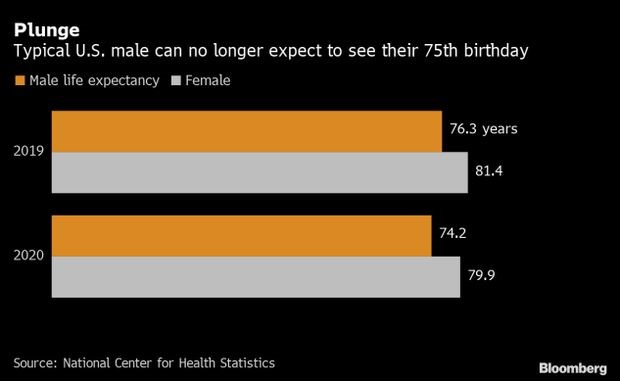