I’m on a text chain with a bunch of golf buddies. We generally talk about the important things in life—the PGA Tour, the NFL playoffs, and our Draft Kings lineups. As you can imagine, at times, the discussion turns to politics, the economy, and the pandemic. Earlier this week, one string touched on national/state/local government efforts to control the virus—masks, mandates, closures, and vaccine passports. While it probably surprises no one that a bunch of middle-aged golfers generally lean center-right, the center-left Democrat among us made the argument that the increase in deaths caused by a novel virus would cause any government to make decisions, some of which turn out to be bad and look ridiculous in hindsight. He was making the case that it was reasonable for policymakers confronting an unprecedented situation to make mistakes; it’s the we’re all human and humans make mistakes explanation. Ok, but two years into the pandemic, is that what is still going on? There is no doubt that we are living in an era of political division. In fact, Joe Biden campaigned on bridging that divide and ending the pandemic through technocratic competence and expertise. The reality has been much different, and is evident in the continued policy divergences between red and blue states. A year into the Biden presidency, to many, the administration seems driven by moralizing and partisanship rather than the promised calm neutrality and rational calculation. The effort so far, despite a great overlap in personnel, is in direct contrast to what we witnessed during the Obama administration. The Obama presidency was motivated by the conviction that competent management, using behavioral economics, could unite the nation. How do we know? President Obama signed an Executive Order on the subject and appointed Cass Sunstein as his regulatory czar. Prior to his appointment, Sunstein wrote a book titled “Nudge,” that pioneered the use of behavioral economics to achieve political gains. Instead of mandating behaviors, “nudge” dynamics suggested that governments might alter “choice architecture” to incentivize desired behaviors and discourage undesired ones. In short, the belief was that small changes, the use of an opt-in or opt-out choice rather than a mandate, could re-engineer mass behavior in prosocial directions. The idea was finding a functioning medium between free-market conservatism and state-guided liberalism. In his book, Sunstein contrasted nudge-type efforts with mandates, and argued the former is preferable because it is “choice-preserving.” The Biden administration and its state-level allies have made a hard pivot away from the nudge approach towards an embrace of mandates. While the presumed justification is the severity of the Covid crisis, something else differentiates Covid technocracy from its “nudge” predecessor: a remarkable incuriosity about whether its dictates actually work. In contrast, the nudge approach was at least presumably outcome-oriented: it assessed interventions based on their measurable impact. One of the problems with mandates is that they conflate intention and outcome. Mandates are difficult to enforce and generate backlashes, and often prove counterproductive, but they remain in force, despite failing to achieve objectives, because they demonstrate a moral commitment to a desired aim. For the politician, mandates offer a seductive choice—when mandates fail to achieve desired results, it becomes the fault of those who didn’t follow the rules, rather than those who imposed them. An empirical approach would include the reality of noncompliance as part of what needs to be measured to assess the efficacy of a policy proposal. However, that strategy would imply that the technocrats, rather than the anti-vaxxers or anti-maskers, should be held accountable for policy failures. Small wonder it has fallen out of favor. Beyond a human mistake, the Biden administration’s devotion to mandates, regardless of the evidence against them, looks more and more like a punitive backlash against political enemies. Far from a means of transcending hyper-partisanship, Biden’s technocratic management has become just another means of pursuing it.

Is the Biden Administration Detached from its Voters…the National Journal Thinks So. President Biden’s speech in Atlanta put the issue of voting at the forefront of his agenda in the New Year, declaring that election reforms are essential to the future of American democracy. At a time when the country is struggling through the latest wave of the pandemic, worsening inflation, and a spike in violent crime, the priority looks like the latest example of a politically tone-deaf administration more eager to placate its progressive base than tend to the interests of the broader American public. More confounding is that the White House’s high-stakes push has little chance of success. With the administration unrealistically raising expectations, only to face an inevitable political reality, it creates a worst-case situation for Democrats. Party leaders are dispiriting their base by making promises they cannot keep, risking that their voters will stay home during the midterms. By focusing on an issue that barely rates as a top concern, the Biden team is losing the support of middle-of-the-road Americans. The bottom line is that the president does not have the luxury of focusing on secondary issues when the country is disillusioned with his economic stewardship and pandemic management. This is far from the first time President Biden has placed the whims of progressives ahead of his overall interests. The White House held a bipartisan infrastructure bill hostage to the still-stalled BBB, letting progressives make unrealistic demands that deprived the party of a political victory. The White House has also been reluctant to challenge teachers’ unions pushing for school closures during Omicron, even while calling for schools to remain open during this latest wave. After promising to work in a bipartisan fashion during his inaugural address, the president opted to push through a $1.9 trillion coronavirus emergency bill on a party-line basis. Democrats are living in an alternative reality that makes true believers feel good but is disconnected from harsh reality. As the midterm elections draw closer, there are more Senate Democrats moving closer to the Manchin-Sinema point of view than the president’s. While the new year offered Biden an opportunity for a course correction, he’s instead shown that he’s incapable of challenging his party’s most strident ideologues in the run-up to a rough midterm election. Effective presidents dictate the direction of their party without succumbing to pressure from interest groups. The Biden administration looks like it has been captured by its activist class to the point of no return.

A Shift to Free Trade in 2022…The Eurasia Group: “Think Again.” The protectionist tilt of U.S. trade policy during President Joe Biden’s first year in office will continue through 2022 as the White House maintains its focus on domestic manufacturing, labor, and economic concerns. The tariff reductions and trade expansions Biden delivered in 2021 were limited in scope and structured to appeal to domestic labor and other protectionist interests; this dynamic will limit additional trade progress this year. The U.S. is unlikely to reverse its opposition to adding members to the WTO’s appellate body, denying it a functional quorum; domestically, Biden’s inability to pass substantial climate legislation will make cooperation with partners—including on trade—more difficult in the coming years.

Republicans are in a Very Strong Position Heading into the Midterms Believes the Eurasia Group…and Just About Every Other Political Analyst.  Democrats face large headwinds going into the 2022 midterm elections, making it extremely unlikely that they can hold the House (90% odds that Republicans win) and unlikely that they can hold the Senate (65% odds that Republicans win). With Republicans in control of the House, risks around government shutdowns and the debt limit would increase, as would investigations into the Biden administration. The locus of policymaking, meanwhile, would shift to the executive branch in areas such as competition, labor, de-carbonization, consumer protection, and financial regulation. If Republicans end up controlling the Senate, judicial and executive branch vacancies would go unfilled until 2024.

“Calling me a moron during a Senate hearing may have alleviated the stress of the least trusted bureaucrat in America, but it didn’t take away from the facts.”

Any revised Build Back Better bill would almost certainly attempt to disguise the cost of entitlements by making them initially less-generous. However, experience teaches that no matter how slimmed-down the initial provision, an entitlement’s costs grow inexorably over time. In fact, the history of U.S. entitlements is a 230-year record of continuous expansion and liberalization. 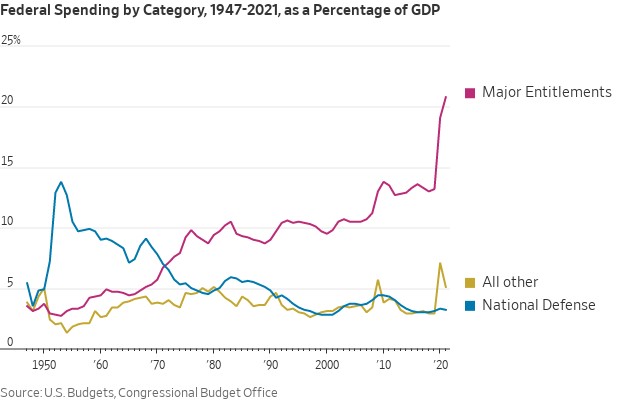