Although, in some ways, it feels like we just went through a national election, as we end 2021 and head into 2022, all the talk in Washington is turning to next year’s midterm elections. The elections will determine which party controls Congress, and business analysts should recognize that the coming election will influence all upcoming policy positions, legislation, and votes. To inform their clients about the direction the midterms might take, the Brunswick Group outlined five myths they see about American politics in the age of Donald Trump. If anything, Brunswick believes the past five years have shown that the coalition that supports the former president and his policies is larger and more durable than people originally thought when he was elected in 2016. While Mr. Trump’s populist, nationalist, and isolationist views, and claims that the 2020 election was stolen, have nearly become Republican orthodoxy, results from the 2020 presidential election and this year’s races in New Jersey and Virginia paint a clearer picture of the nature and depth of support for a reshaped, working-class Republican Party. They also demonstrate that five widely held assumptions are false. First, that Trump’s victory in 2016 was an aberration. The common perception that Trump’s victory was a fluke, and attributable to the weakness of Hillary Clinton as a candidate, was disproven by the 2020 results. Last year, Trump received the second highest vote total in history and 11 million more people supported his candidacy than did in 2016. Second, that demography is good for Democrats. With Obama’s victory in 2008, it became an article of faith that demographic trends would inevitably make Democrats the majority party. As the country becomes more diverse, the reasoning goes, it will inevitably become more Democratic. The 2020 results tell a different story. The Republican Party made significant inroads with Hispanic, Asian, and black voters. Third, that a higher turnout is always good for Democrats. The results from the 2020 and 2021 elections suggest this is not necessarily the case. The transformation of the GOP to one that is more populist and working-class has enabled it to tap into a large pool of occasional or non-voters. Fourth, that the Trump presidency realigned the suburbs towards Democrats. On the surface, this appeared to be true based on the 2018 midterm results and the vote for Biden in 2020. However, signs suggest that support for Biden from suburban voters had more to do with their dislike of Trump than a realignment with the Democrats. The clearest evidence being that Republicans unexpectedly picked up 14 House seats in 2020, largely in suburban districts, because of concerns that the Democratic Party had moved too far left on cultural issues. The results from the 2021 elections in Virginia and New Jersey continued the trend of Republican support in the suburbs. Finally, that Trump pushed independents into the Democratic Party. While independents were key to the Democrats’ success in the 2018 midterms and Biden’s win in 2020, their support for Biden and the Democrats has cratered this year.

Brookings Institution: A Funny Thing Happened on the Way to President Biden Signing a Historic, Bipartisan Infrastructure Bill­—He Lost Popularity. President Biden’s approval ratings have cratered; why? The country’s chaotic departure from Afghanistan at the end of August definitely had an effect, as did the return of inflation. During this same time, however, Americans were bombarded with minute-by-minute commentary on the progress of the infrastructure and Build Back Better reconciliation bills, with people in the know, and people out of the know, pontificating on the negotiations. The very process of passing the legislation turned people off not only to Congress, but to the president himself. There is a common saying that laws are like sausages, and it is best not to see them being made. This year, legislative sausage-making fully emerged from back room negotiations into the wide-open world of social media. In the old days, complex deals between warring factions were worked out behind the scenes. Today, they play out on 24/7 platforms where opinions and characterizations go out unfiltered. Yesteryear’s media environment stands in sharp contrast to today’s around the clock coverage. Whereas the American people­ were left largely in the dark about the day-to-day political drama that characterized the passage of legislation, today, cable news provides nonstop coverage of just about everything, and is amplified by Facebook­ and Twitter. In today’s media universe, everyone is an insider, everyone has an opinion, and everyone was quick to jump on the bandwagon as they tracked each twist and turn in the infrastructure negotiations on social media. The challenges of finding majorities in a collective body like Congress around controversial policy issues have always existed. In the same way that President Biden’s infrastructure bill limped across the finish line, other presidents of both parties have faced similar issues with signature pieces of legislation. But for President Biden, an already difficult job was made even harder because of social media’s omnipresence in informing and misinforming Americans about legislation, legislators, and the legislative process. Compared to past negotiations over major pieces of legislation, the fight over the infrastructure bill was not very long and not unusually contentious. But we didn’t used to see it play out in real time before the public. And the public, not accustomed to the sausage-making of legislation, got to the point where the process became more important than the policy—and President Biden suffered.

Eurasia Group: There is No New Deadline for Build Back Better. Consistent with our base case, Senate Democrats have given up on Build Back Better in 2021. With no action-forcing events on the horizon, the timeline for passage could easily slip into Q2 next year. There is now a 65% chance the bill passes sometime next year before the August recess, and a 35% chance of failure. Signposts will not become clearer until after the government funding deadline of February 18. Sen. Manchin (D-WV) will largely take the blame for stopping both the BBB and Democrats’ other major priority, voting reform, but recriminations will also hurt President Biden’s standing in the party. The truth is that the White House overpromised early in the year when they rolled out a sweeping domestic agenda that was too much for the narrowest Congressional majority in American history. A weak Biden in 2022 will lead to a strong primary challenge in 2023. While voting reform will not pass due to the Senate’s filibuster rules, Democrats are unlikely to stop pushing on BBB. Sen. Manchin has said he will support a $1.75 trillion bill that has no gimmicks or sunsets in it. While elevated inflation makes that a harder vote for him, expect Democrats to reconvene in January and try to fit their expansive bill into this much smaller package. If they instead stop talking about BBB in January, those 35% odds of failure will go up.

“These texts leave no doubt: the White House knew exactly what was happening at the Capitol. Republican members of Congress and others wrote to Mark Meadows as the attack was underway.”

Fed Signals Pivot on Inflation. With the Fed’s pivot, there is little doubt that the politics of inflation are front and center. While Omicron is both a supply and a demand shock, one whose effect on consumer and worker sentiment is just starting to be seen, the surprisingly high inflation readings this fall across industrial and emerging markets have compelled leading central banks to give greater priority to curbing inflation, despite the demand risks from the new variant. The Fed’s pre-meeting projections show a smooth return to low-inflation growth, but the central bank sent a clear message that price stability is its primary focus and that it is prepared to hike rates aggressively if needed. Because that message has broad, bipartisan support in U.S. political circles, the Fed is unlikely to face the backlash that other central banks may experience as their rate hikes provide new headwinds to recovery. 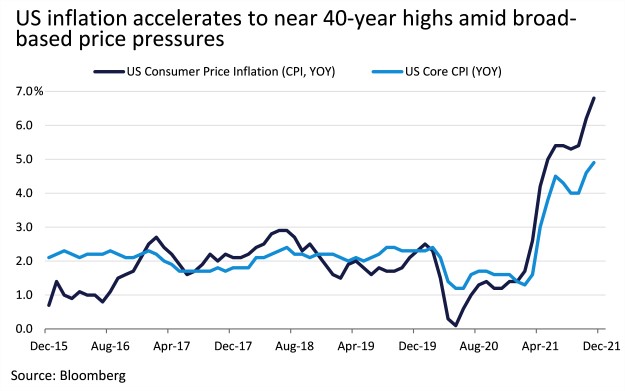