It’s a beautiful late summer evening. The tickets were free, the beer is cold, and you’re about to sit down to what appears to be a great matchup between starting pitchers. Whether it’s Yankee Stadium, Minute Maid Park, or Camden Yards we’ve all felt that excitement of being part of a pennant race or wildcard chase. And then things go from bad to worse—an error here, a strikeout there, and suddenly your team is way down before they’ve even played “Sweet Caroline,” “Take Me Out to the Ballgame,” or “Thank God I’m a Country Boy.” The stadium is packed, you turn to your seatmate, nod to one another, and decide to beat the traffic. Just in case, you put the game on the radio for the ride home, and as you pull into the garage, you realize, you’ve heard, rather than seen and been a part of, an incredible comeback. That’s a bit like what Washington, Capitol Hill, not Nats Park, feels like these days. Just a few weeks ago, Democrats were down and out, and political consultants and pollsters were falling all over themselves arguing about just how big the “Red Wave” in November would be. You can’t blame them. Beyond the historical advantages built into midterm elections for the party out of power, the economy was in reverse, inflation was hitting 40-year highs, violent crime was spiking, fentanyl was spilling across the southern border, and President Biden’s poor approval numbers were a reflection of the difficulties the Democratic Party faced. Then something funny happened on the way to Congress’ August recess. The White House announced the killing of al Qaeda leader al-Zawahri; the Senate passed the Inflation Reduction Act (IRA); reports revealed that gas prices fell for more than 50 straight days; President Biden signed the CHIPS and Science Act to spur domestic computer chip production and the PACT Act to help veterans; the U.S. approved the accession of Finland and Sweden into NATO; and the latest economic reports showed that not only had inflation eased in July but unemployment was just 3.5%. All of this came on top of the signing of a gun-safety bill and a vote in Kansas on abortion that showed the issue just might drive more Democrats to the polls in November. Although it remains unclear whether the legislative wins will translate into electoral success, the narrative inside the beltway has shifted and Republican leaders are already looking to manage expectations. Most analysts still assume that the House will turn Republican later this fall, but due to the election of a number of “exotic” candidates in swing state primaries, these same analysts now believe Democrats may hold the Senate. Then, just as we thought we could join Congress in recess before the general election starts in earnest after Labor Day, an FBI raid on former President Trump’s Mar-a-Lago estate has rallied his supporters around claims of unjust treatment and politically motivated targeting. As the Yankee great Yogi Berra once said—about games, and maybe elections—“It ain’t over til it’s over.”

Inflation Reduction Act (IRA) Passes the Senate. Nearly every Washington consultant, think tank and trade association reported on the Senate’s passing of the Inflation Reduction Act (IRA) by a 51-50 vote, with Vice President Harris casting the tie-breaking vote. The bill now moves to the House, where the Democratic majority is expected to pass it on Friday or Saturday. The bill survived the ‘Byrd Bath’ review and amendment process with only a handful of changes, most notably the elimination of a cap on insulin pricing for private insurance. The raft of energy provisions in the bill all moved forward, including an expansion of the EV tax credit linked to domestic content requirements for battery components and critical minerals. Democrats had to thread the needle on a last-minute deal to address Sen. Sinema’s (D-AZ) demands on corporate minimum taxes after she supported a Republican amendment that nearly forced a last-minute collapse of the bill (in a compromise, certain entities were carved out from the corporate minimum tax in exchange for an extension on the limitation for business loss deductions).House Democrats are lining up behind the bill, including a group of Northeastern members led by Rep. Gottheimer (D-NJ) who were demanding an increase in the cap on state and local tax (SALT) deductions before they would support the IRA. House progressives will voice opposition to the oil and gas provisions in the bill but will ultimately support it. The House process for final passage is much easier than the Senate thanks to proxy voting, where only a portion of the members will need to return to D.C. for final passage.

Mar-A-Lago Raid Refocuses Spotlight on Trump and Offers Boost to GOP says Eurasia Group. The FBI executed a search warrant at Mar-a-Lago, one of former President Trump’s homes. While the justification for the warrant has not been confirmed, it is reportedly linked to an investigation of Trump’s handling of classified documents. That a warrant was issued and executed is notable; while investigations targeting active or potential national candidates are not unprecedented, an investigation targeting a former president who will likely run again is. Although it seems unlikely that the investigation will change many voters’ minds on Trump—supporters will still back him and opponents will have another reason to dislike him—it offers the former president an opportunity to revitalize his slipping standing in the party and reiterate claims of persecution by the “deep state.” The effort to rally around Trump has already begun, and his standing in the party will likely be bolstered by this, although the effect is not measurable yet in polling. While it is impossible to know if this warrant makes future action more or less likely, it shows it is possible. At present, Florida Governor DeSantis is the most likely alternative to Trump as a 2024 Republican candidate, and while he had no forewarning or role in the raid, the optics of the warrant being served in Florida offer Trump the opportunity to paint his most likely rival as an unreliable defender against perceived attacks on conservatism. Beyond offering Trump an opening to revive his position in the party, the investigation strengthens the view that a likely Republican House majority will focus on investigations of the Biden administration above all else. House Minority Leader McCarthy (R-CA), the likely Speaker in a Republican House, confirmed that view and suggested Republicans would target the DOJ, White House, and Biden family with multiple investigations immediately upon taking the majority. Claims that this investigation could bar Trump from running again are overstated; the scope of the investigation, much less the outcome, is unknown, and constitutional experts say there are little grounds for disqualifying a candidate for mishandling documents.

Politico Reports on an EU Warning that a Proposed U.S. EV Tax Credit may Violate Global Trade Rules. The European Union has warned that a revised U.S. tax credit for electric vehicles appears to violate World Trade Organization rules and could undermine joint efforts to address climate change. The EU’s concern is with domestic content and local assembly requirements. The critique comes as the House is set to take up the Senate approved Inflation Reduction Act (IRA), which contains a $7,500 tax credit for electric vehicles assembled in the U.S. While many European and Asian automakers have production facilities in the U.S., they also export fully-assembled cars to America. Additionally problematic is that half of the credit depends on a percentage of the critical minerals contained in the car’s battery being extracted or processed in a country with which the U.S. has a free trade agreement or recycled in North America. The other half of the credit would be available if the value of components in the battery manufactured or assembled in North America exceeds a required percentage. What’s more, there would be no credit for a vehicle whose battery inputs are sourced or made in China, Russia, Iran, or North Korea.

“They even broke into my safe!” Former President Trump reacting to the FBI raiding Mar-a-Lago.

“He is a coward; a real man wouldn’t lie to his supporters. He lost his election, and he lost big. I know it, he knows it, and deep down I think most Republicans know it,” Former Vice President Cheney on former President Trump.

The White House Situation Room is being renovated for the first time since 2007. The makeover includes technology and equipment updates that should help President Biden’s national security team make decisions more effectively. Contrary to the name, the Situation Room is actually a collection of conference rooms and quarters that provide a classified area for the highly sensitive exchange of information. President Kennedy created the Situation Room in 1961 after the failure of the Bay of Pigs invasion was chalked up to deficiencies in real-time communications and information within the executive branch.

The Conference Board reports that the Consumer Price Index (CPI) slowed to 8.5% in July from 9.1% in June; a decline in energy prices being the major factor in this month’s reading. Core inflation rose by just 0.3% from the month prior—the smallest increase since March. While the readings support the view that inflationary pressures may have peaked, work remains to address elevated inflation. The next Fed meeting will occur in late September, and another 75-basis point hike likely awaits, especially in light of a tight labor market. Ultimately, the U.S. economy is expected to slip into recession before the end of 2022. 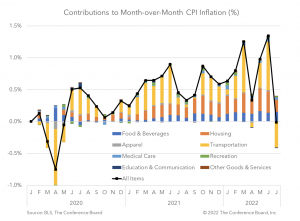