An old SCOA colleague reached out to me this week to ask why Congressional Republicans would vote to remove Rep. Liz Cheney (R-WY) from her leadership post as the third-ranking Republican in the House of Representatives. It’s an interesting question, particularly when you consider the success Republicans had with female candidates in 2020. Although the answer was immediately clear to me, her question illustrated just how far cable news, and social media, have strayed from reporting the hard news that takes place on Capitol Hill. There is no doubt that much of the political media’s spotlight the past two weeks has been on Congresspersons Cheney and Adam Kinzinger (R-IL)—two faces eager to get on cable news and make their case that the GOP should move away from President Trump. However, neither President Trump, nor the Capitol mob on January 6, have been part of any recent conversations I’ve had with Congressional staffers, in the associations, or at the think tanks. While the former president’s name may attract eyeballs in the press, he’s largely absent from day-to-day policy discussions. And this gets to the crux of why the GOP really stripped Ms. Cheney of her post—she wasn’t being a team player for the 2022 mid-term elections, and her stance was beginning to alienate her from Republican, and likely-Republican, voters’ day-to-day concerns. While there is a place for a debate over President Trump, who could be a candidate again in 2024, those I speak to on a daily basis realize that he is no longer president and Joe Biden, with Democratic majorities in both the House and Senate, has been the commander-in-chief for over 100 days. Rep. Cheney’s job wasn’t to lead a debate on President Trump, it was to lead the GOP’s public response to the Biden administration’s agenda and to help the party win the midterms next year. Congresswoman Cheney’s focus on re-litigating the events of 2020, and early 2021, had become a distraction from the Republican Party’s message, and this is why she was ousted. My friend said I was wrong, and that Cheney’s removal was due to the GOP paying homage and bowing down to President Trump; I had to remind her that Rep. Cheney was reaffirmed to her post as conference chair even after being only one of 10 House Republicans to vote for President Trump’s second impeachment. Cheney lost support because Republican policymakers in Washington largely believe moving on from Trump means: (1) not talking about him constantly; and (2) delivering the 2022 election by being responsive to voters’ concerns.

Eurasia Group: Infrastructure week is looking like infrastructure summer. As Republicans and the White House trade offers, the two parties are unlikely to find common ground allowing a bipartisan bill to move forward. While both sides are seemingly trying in good faith, the back-and-forth negotiations are likely to last for at least another week or two; if they stretch into June, which would delay progress on budget and committee work, it would set up a timeline for final passage of a partisan infrastructure bill via reconciliation in Q4, rather than Q3. The sticking points remain the same—partisan debates on the specifics of how much to allocate to physical infrastructure versus broader economic and social programs and multiple views within the Democratic caucus about tax increases.

Eurasia Group: Light NS2 sanctions help US-German ties and plans for Russia summit. The US will issue limited sanctions against the Nord Stream 2 pipeline (NS2). The action, if confirmed, would help strained relations with Germany and talks over the future of the pipeline. Although the Biden administration is certain to face backlash from congressional Republicans over the move, operationalization of the pipeline will depend on an eventual deal between Washington and Berlin; the pipeline is unlikely to go on line until 2022 at the earliest. The US move is indicative of a determination not to delay what is hoped to be a big “transatlantic reboot” with European allies, and Germany in particular. Going somewhat easier on NS2 may also indicate a desire by the US to find the EU more appreciative of attempts to work together vis-à-vis China. The sanctions reports have also been greeted positively in Russia, smoothing the way for a summit between Biden and President Putin next month. Although waiving the sanctions might help the White House in talks with the German government and with the summit, it would create at least two domestic political problems for Biden that raise the issue’s profile. First, it provides an opening for Republicans to criticize Biden’s handling of domestic energy issues after shutdown of the Colonial pipeline and Biden’s decision to block the Keystone XL pipeline. Second, it allows Republicans to portray Biden as weak on Russia, an issue where his predecessor Donald Trump was not. All of this could put NS2 front and center in US domestic politics for the near term. The timing of the deal is also crucial; with operation unlikely until 2022 at the earliest, it is possible that a US-German deal is delayed until after the 2022 US midterm elections, where Republicans have a better than even chance of re-taking the House. If a deal is delayed until after this election, it would increase Republicans’ leverage and could complicate a deal further.

Eurasia Group: Fed Minutes Give Aid to Inflation Narrative: Federal Reserve minutes suggest that the central bank is beginning discussions about when to taper in response to signs of rising inflation. The minutes provide fuel to the narrative of an overheating economy that Republicans are latching on to in opposition to President Biden’s spending plans. Such a narrative raises prominent concerns that the tax increases Biden has proposed to pay for his spending plans will ultimately constrain the size of a final infrastructure bill, potentially below the $3-4 trillion range.

— President Biden, test-driving a Ford F-150 during a trip to Michigan.

Eleven royals have addressed a joint session of Congress: Queens Elizabeth II of the United Kingdom and Beatrix and Juliana of the Netherlands; Kings Kalākaua of Hawaii, Baudouin of Belgium, Mahendra of Nepal, Bhumibol of Thailand, Juan Carlos of Spain, Hussein and Abdullah II of Jordan; and Pope Francis. 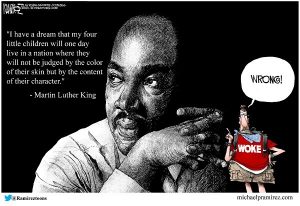