While the Biden administration just completed its first 100 days in office, and for most Americans the 2020 election was just a few short months ago, in Washington the 2022 mid-term elections are quickly approaching and are already influencing policy decisions. This is why a new study by Democratic data firm Catalist, giving us a sneak peek under the hood of the American electorate, is of such interest.  What quickly becomes apparent when reviewing the data is how dramatically the electorate has changed since the 2016 election—in 2020, fourteen percent of the electorate voted for the very first time; Millennials and Gen Z made up 31% of all voters; and the electorate was America’s most diverse ever, with Latino and Asian American and Pacific Islander (AAPI) turnout increasing substantially. The study confirms what many already suspected: Republicans made serious inroads with Latino voters. As a whole, they swung 8 points toward President Trump. Cuban voters swung back to the former president, and Mr. Trump made advances with Puerto Rican and Dominican voters. At the same time, Black voters continue to be the backbone of the Democratic coalition. In Georgia, a state President Biden won by 11,779 votes, 200,000 more Black voters cast ballots in 2020 than in 2016. While a small percentage of Black voters shifted to the GOP, higher turnout benefited Democrats across battleground states like Arizona, Michigan, Nevada, and Wisconsin. Democrats also made significant inroads with white voters holding college degrees, who have swung 8 points toward Democrats since 2012. While Democrats have put their faith in demographics as destiny, believing that a multi-racial coalition, will allow them to hold both the House and Senate in 2022, the Catalist study is proof that upcoming elections will be much more complicated than that.

American Enterprise Institute (AEI): The Economic Threats that Could Derail the Democrats’ Election Dreams: On the heels of trillions of dollars of pandemic stimulus, analysts are predicting fast growth over the next two years. However, a bout of inflation and counter-cyclical Federal Reserve policy could slow economic momentum; a slow labor market recovery could also further impede post-pandemic growth rates. All of these factors will influence the U.S. economy in the run-up to the 2022 mid-term elections.

Eurasia Group: Inflation Matters for the Policy Debate in the U.S. Inflation has returned as a political and economic focus, and markets have clearly taken notice. The headline consumer price index is expected to rise above 3% year-on-year, in part reflecting weak price pressures at this time last year. The logic of concerns around higher inflation is easy to follow. The federal government has already spent $5 trillion and is gearing up to spend a lot more, while the Fed remains accommodating. As consumers start to emerge from lockdowns, there will be pockets of higher prices. So far, officials at the Fed have made it clear that they view the pressures as transitory, and they believe that they have the tools to deal with any price spikes, should they arise. And after last week’s surprisingly weak jobs report, inflation seems unlikely to change minds in the short-term. Whether or not the price increases are temporary is yet to be seen, but it will weigh on the debate around additional spending and taxes. If inflation comes in connection with another pickup in job growth, the Biden administration’s spending plans could come under more pressure.

Eurasia Group: The Clock is Running on a Bipartisan Infrastructure Bill: Following meetings at the White House, President Biden asked Republicans to bring him a reworked infrastructure proposal; Senator Capito (R-WV) said Republicans would come back with a counteroffer and meet to negotiate next week. Divisions over financing for the bill and the overall scope remain substantial, with Republicans rejecting Biden’s push to pay for the package via tax increases and include priorities beyond physical infrastructure; it is unlikely that negotiations will result in a compromise that can both attract enough Republican Senators and lose few enough House Democrats to pass. How long the negotiations continue is now a vital question; with a budget coming soon, Democrats are on the clock to decide how they want to proceed, and the longer bipartisan talks stretch out the harder it will be to move even a partisan mega-bill quickly. Timing has now been pushed further to the fall and makes it increasingly likely that a final package doesn’t move until Q4.

“I never said anything I believe is inappropriate…If I just made you feel uncomfortable, that is not harassment. That’s you feeling uncomfortable.” — New York Gov. Andrew Cuomo (D)

Former Rep. Lester Wolff (D-NY) died Tuesday at age 102; he was the oldest living former congressman. 101-year-old former Rep. Neal Smith (D-IA), who represented Des Moines from 1959-95 and was one of President Biden’s oldest endorsers in 2020, now holds the title. 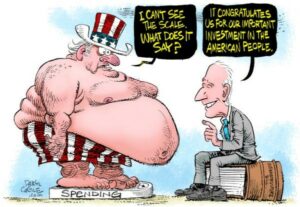