We all make New Year’s resolutions. From eating better and drinking less to staying fit or crossing that exotic excursion off one’s bucket list, resolutions are something we all make but find difficult to keep. While the Babylonians were said to be the first to make New Year’s resolutions 4,000 years ago, today’s Gregorian New Year began in ancient Rome, when Emperor Julius Caesar introduced a new calendar and declared January 1 as the start of the year. The Romans originally celebrated the New Year in March, but moved it to January to honor the Roman god Janus, the two-faced god who could look back to the past and forward to the future. At the January New Year, the Romans would offer sacrifices to Janus and make resolutions for good behavior. Before looking ahead to what 2023 may bring, here is a look back at some of the worst political predictions for 2022, in no particular order:

Capital Alpha Sees No Substantive Difference in Outcomes from Speaker Debacle. This week, marked the first time in 100 years that an incoming majority party in the House of Representatives failed to elect a Speaker of the House on the first ballot. It’s a debacle for House Republicans in many ways. On a basic level, electing a speaker is the first step in organizing the House for a new session of Congress. Nothing else happens until a new speaker is elected, the members are not even sworn in, and the credibility of the institution is put at stake. In fact, the ability of House Republicans to run Congress is in question. On the other hand, the early failure to elect a new speaker in multiple ballots tells us nothing that we did not already know about the likely un-governability of the House under the current Republican majority, with its slim margin and combustible personalities. House Republicans may elect a Speaker of the House other than Kevin McCarthy, but we should not expect any substantive changes in policy outcomes as a result. If a blowup had to come, it is better to have it now, and not later in the year when Congress must extend the debt limit. In fact, the CBO’s annual economic report, expected at the end of January, could point to an X-date for the debt-limit sooner than currently expected.

Conference Board: Looking Ahead to 2023 and Beyond. Uncertainty and volatility will be the dominant economic themes of 2023. While a global recession is still not The Conference Board’s base case scenario, regional recessions across mature as well as emerging and developing economies are almost certain.
It is anticipated that Europe and the U.S. will descend into brief, but mild, recessions, while China will experience faster but still below-average growth after the pandemic dampened economic activity in 2022. Generally, lingering effects of the pandemic, the ongoing war in Ukraine, elevated inflation, tightening monetary policies, and weak growth will characterize the economic outlook globally and for individual economies. In 2024, the global economy likely will experience a modest revival as pandemic recoveries should be complete and central banks stop hiking or even cut rates after having tamed inflation. However, growth rates in 2024 and beyond are likely to be below pre-pandemic trends. The Conference Board’s full report, with 2023-31 growth forecasts for many economies, is available through the Washington office.

Eurasia Group’s Top Risks for 2023…and Some Red Herrings. Although 2022 saw many positive signs—we’re (mostly) through the pandemic, Russia is not winning in Ukraine, the EU is stronger than ever, NATO rediscovered its reason for being, the G-7 is strengthening, renewables are becoming cheaper, American hard power remains unrivaled, and the U.S. midterm elections were decidedly normal—the world remains in a geopolitical recession, with risks this year among the most dangerous of the past 25 years. Here are 10 risks, and some red herrings, for 2023 (contact the Washington office for further elaboration of each):

The demands on Speaker McCarthy (R-CA) from House Freedom Caucus (HFC) members are extremely aggressive. In a sign of the enormous leverage conservative hardliners have right now, McCarthy and his leadership allies have considered, and nearly approved, all of them. The demands include: allowing any single member to offer a “motion to vacate the chair,” essentially a no-confidence vote in the speaker;  placement of as many as four HFC members on the Rules Committee, which is how the speaker controls the floor; and guaranteed floor votes on border security and term limit bills. Conservatives also want multiple subcommittee gavels, including an HFC member as an Appropriations Committee “cardinal;” and having an HFC member chair the Select Subcommittee on the Weaponization of the Federal Government.

“With regards to the fight over the Speaker…that’s not my problem…I just think it’s a little embarrassing that it’s taking so long,” President Biden on the lack of a House Speaker.

The vote for Speaker of the House in 1855 was the longest in history. Initially, 21 candidates vied for the role, with Congress deeply divided over slavery. Nathaniel Banks of Massachusetts, a member of the American Party (also known as the Know Nothing Party and, prior to 1855, the Native American Party) eventually won the speakership on the 133rd ballot, nearly two months after the first ballot had been cast.

Firms Will Face Tougher Wage Demands in 2023. Although corporations are closely monitoring inflation, monetary policy, and geopolitical risks, they are also carefully calibrating their talent and wage-setting policies. Real wages are falling in many countries, and the resulting discontent may lead to a greater risk of strikes, unrest, and reputational challenges for global brands. 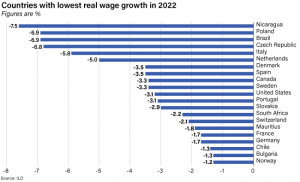