You know it’s a warm day in February when a D.C.-based government affairs analyst feels that Washington, and national politics, may have finally “jumped the shark.” For those of you who don’t know, “jumping the shark” comes from the classic television series Happy Days. During a late episode in that show’s fifth season, one of the main characters, Fonzie, jumps over a confined shark, while on water skis. The ridiculousness of the premise was recognized immediately as taking things too far, and became the epitome of a once-loved program losing touch with its original appeal. In popular jargon, the phrase “jumping the shark” is meant to identify the very moment when something that was once popular peaks and begins a decline in quality and popularity to the point of near absurdity. While the Trump administration may have been likened more to the Bill Murray comedy Groundhog Day, the last six months of the Biden administration and Democratic control of Congress seems more akin to “jumping the shark.” In recent weeks, we’ve watched Senate Majority Leader Schumer force votes on election rights and filibuster reform that where known would fail; we’ve learned of Speaker Pelosi and her husband’s mega stock trading with reported annualized returns in excess of 69%; we’ve viewed footage of secret charter flights carrying illegal immigrants landing in the dead of night; and we’ve witnessed a pressure campaign to force Supreme Court Justice Breyer to announce his retirement early. While Happy Days began, and gained in popularity, because of its nostalgic look back at the 1950s, democratic progressivism began as a revolutionary and noble ideal. The notion was that a professional elite would mediate social conflicts, improve the lives of the poor, and engineer the best possible administrative solutions to pressing social concerns. What’s more, Keynesian macroeconomic management would ensure lasting prosperity and progressive taxation would spread the benefits of prosperity far and wide. Democratic progressivism held out the hope that competent professional management could tame capitalism and democracy. So, when exactly did the latest version this progressive ideal “jump the shark.” During a National Journal sponsored briefing this week covering President Biden’s first year, national columnists and political analysts Charlie Cook, Josh Kraushaar, and George Condon specifically pointed to the botched withdrawal from Afghanistan. Prior to Afghanistan, the new administration was riding high in the polls, and many pointed to progressive politics’ supposed 3Cs—compatibility, compassion, and competence—as the strengths behind President Biden’s victory. Afghanistan raised doubts on all three. Concerning compassion, the president did not seem to feel others’ pain, neither Afghan citizens nor American service members killed in action; the exit exposed a clear crisis in competence; and with regard to credibility, many administration statements were fact-checked as patently false. Just as “jumping the shark” identified the point where Happy Days ratings started to tank, Afghanistan appears to hold similar significance for the president. From high-to-low, President Biden’s approval ratings have plummeted 15 percentage points. Although the life cycle of a governing paradigm is certainly different from that of a TV sitcom, those that “jump the shark” suffer similar fates—cancellation and losses in the next election.

The Brookings Institution Asks Whether President Biden and the Democrats Can Get Out of Their Hole? As President Biden begins his second year in office and the battle for control of Congress heats up, Democrats find themselves in a deep hole. Early in Biden’s tenure, 55% of Americans approved of his performance; today, his job approval has fallen to 42%. The Republicans’ current 4-point edge in the generic House vote is likely to produce a massive swing in their direction due to the strong relationship between President Biden’s public standing and Democrats’ prospects in the forthcoming midterm elections. A recent study found that in this era of polarized and nationalized politics, a president’s job approval does more to influence midterms than any other factor. In addition, further analysis shows that Biden’s low job approval in swing states is weakening Democratic candidates for the Senate. Unless the president can move his approval from the low to the high-40s, Democrats have virtually no chance of retaining their House majority or of continuing to control the Senate. While voters have downgraded their evaluation of the White House’s performance across the board, losses on two key issues that were key to his campaign—dealing with the pandemic and bringing the country together—have been especially steep. Among all voters, President Biden’s job approval has declined by 15 points, but it has declined by 21 points among Independents and 22 points among moderates. A Gallup survey, which examined the impact of partisanship but not ideology, found that the decline in Biden’s personal ratings were driven by shifts among Independents. A key reason for the shifts—moderates and Independents now view President Biden as less moderate and more liberal than they did at the beginning of his administration. While President Biden has suffered wide reverses, he has lost more ground among voters in the center of the electorate than on the left. If he is to regain support among moderates and Independents, he must work harder to overcome their objections to the way he has positioned himself during his first year in office—including their perception that he has governed farther to the left than they expected when they voted for him in 2020.

Eurasia Group Says Government Shutdown Is Unlikely Even as Funding Deadline Approaches. The U.S. is closing in on the February 18 deadline Congress set for itself last year to fund the government through 2022. While no agreement has come together yet on funding, a shutdown is unlikely. Sources report that Congress is likely to pass a mix of full-year funding bills for some parts of the government and short-term extensions for others by the deadline. The impact of this approach is two-fold: (1) it makes a full shutdown on the 18th unlikely; and (2) means that funding for some agencies will not keep up with shifting priorities in the coming year. If Congress can agree on a topline-funding amount, it would be a positive signpost for greater cooperation; if no agreement is reached, more bills may be pushed to short-term extensions. Disaster funding to address ongoing COVID issues is another open question: while the White House wants to include additional funds, House Democrats have asked the administration to hold back on advocating for additional funds until agreement can be reached on the funding bills.

Eurasia Group and Other D.C. Consultants Confirm the BBB is Fading as a Priority in the Face of a Crowded Calendar. Democrats have publicly signaled a willingness to let moderate Senator Joe Manchin (D-WV) dictate the contents of a revised Build Back Better (BBB) Act, suggesting a path forward for parts of the bill. Although internal party disagreements and weak incentives for Manchin to push a bill keep the odds of approval below 50%  this year, the legislative calendar dictates that any progress is unlikely until late spring or early summer, at the earliest. The calendar includes several items that are—as of now—a higher priority than a revised BBB, including a government funding deadline of February 18, a Russia sanctions bill, the U.S. Innovation and Competition Act (USICA) including semiconductor funding, an effort to reform the Electoral Count Act, and a Supreme Court nomination. At present, for President Biden and the Democrats, inflation remains a bigger political risk than lack of progress on BBB. For this reason, House Democrats are focusing on competition policy and other measures to combat inflation, while the White House has already pivoted to selling the successful bipartisan infrastructure bill.

-Capital Alpha: It’s See You in September for the Build Back Better Act.

“I’ve been saying ‘thanks’ but I haven’t thrown them out the door yet.”

-Maryland Gov. Larry Hogan (R) on Republican overtures for him to run for Senate.

The Conference Board’s Consumer Confidence Index declined in January, after an increase in December. The Index stands at 113.8 (1985=100), down from 115.2 in December, according to the notes associated with the Index’s release, consumer confidence moderated in January, following gains in the final three months of 2021. Although the Present Situation Index suggests that the economy entered the new year on solid footing, expectations about short-term growth prospects has weakened, pointing to moderating  growth during the first quarter of 2022. Looking ahead, both confidence and consumer spending may continue to be challenged by rising prices and the ongoing pandemic. 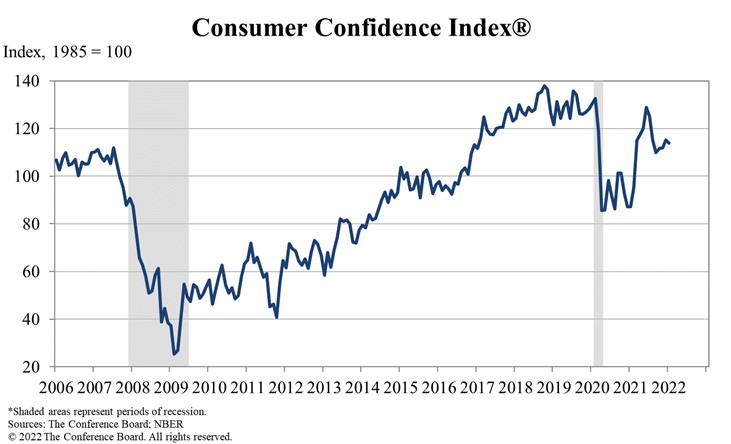