The entire month of August is supposed to be down time in Washington. It’s the time of year when Congress goes on recess; Senators and Representatives head home to meet constituents; congressional staffers drive east to the Delaware and Maryland beaches; and those who live and work around official Washington can go on vacation, get a reasonable tee time, or land a reservation to that trendy restaurant. It’s not the time of year to expect a major foreign policy crisis that potentially changes the calculus of the entire fall legislative agenda. In an interview with Yahoo Finance, Eurasia Group Founder and President Ian Bremmer called the Biden administration’s withdrawal from Afghanistan a crisis and failure. Bremmer said he was surprised by the administration’s “incompetent execution,” and he pointed specifically to four failures—military and intelligence, coordination, planning, and communication. Bremmer believes the White House is staring down a number of worst-case scenarios, potentially along the severity of the Tehran hostage crisis in 1979, the failed Iran hostage rescue in 1980, and Benghazi in 2012. For Bremmer, the U.S. exit poses a “real chance” of destroying the Biden presidency, “not a 50% chance; but maybe a 5% chance.” Whether the Afghan failure will weigh on President Biden’s agenda going forward is the open question for corporate government affairs offices. In the White House’s favor, recent polls suggest that a large majority of Americans support the decision to withdraw forces, including 56% of Republicans and 73% of Independents. In fact, many analysts hold that the images seen over the past few days are unlikely to shift public opinion about a war that has long since generated headlines. “If the only thing that happens is the debacle that we’ve seen on the ground affecting Afghans, then I’m not sure it has huge lasting effects on Biden,” Bremmer says. President Biden seems to agree, admitting during an interview with ABC’s George Stephanopoulos that chaos was “priced into” the decision to withdraw. Still, House Democrats would rather be talking to voters about the Child Tax Credit or Infrastructure while on August recess, not the president’s handling of Afghanistan. Recess is a crucial few weeks Senators and Representatives use to sell the fall agenda to constituents back home; Afghanistan is overshadowing these efforts. Beyond having to be factored into the eventual outcome of the reconciliation process, going forward, the disastrous end to the Afghan conflict will test the bond between the president and vulnerable Democrats. At this point, it remains likely that President Biden will survive, and both the infrastructure and reconciliation bills will pass. However, the president’s standing has taken a severe blow with moderate Democrats, who are increasingly fearful for their prospects in the 2022 midterm elections. Instead of messaging over the importance of the budget reconciliation bill, legislators will now be busy answering questions about the aftermath of the U.S. withdrawal. President Biden has just spent tremendous political capital with his party.

Conference Board: Global Economic Growth Recovery Continues: Despite the spread of the delta variant and continued inflationary pressures, the Conference Board continues to forecast healthy global economic growth for the remainder of 2021 and beyond. To bolster their conclusions, they point to a more balanced recovery, including increased consumption of in-person services, greater capital investment, and wide export growth beyond the consumer demand that has driven the rebound to date. Concerning the U.S., the Conference Board sees real GDP growth rising 7.0% in the third quarter and 6.0% for all of 2021. More long-term, the U.S. economy is projected to grow 4.0% in 2022 and 3.0% in 2023.

Observatory Group: Reconciliation Bill Outlook: While the Senate passed a multi-trillion-dollar budget resolution last week, Democratic leadership will now have to unite moderates and progressives within the party in order to pass a reconciliation bill to fund their priorities. Intra-party strains have already emerged over: (1) the final size of the bill; and (2) whether a Senate passed infrastructure bill should move on its own or in tandem with the reconciliation legislation. The budget resolution that passed the Senate is a $3.5 trillion blueprint, which would fund a vast assortment of Democratic social and climate change programs. Many analysts, including those at the Observatory Group, expect that the horse-trading between moderates and progressives will limit the final size of the package to somewhere in the range of $2.5 trillion. Combined with the $550 billion in new spending contained in the physical infrastructure bill, the size of the two measures will approach $3 trillion over 10 years. Regardless of the early tensions, Democrats will eventually pass both a party-line reconciliation bill and the bi-partisan physical infrastructure bill. Passage of the measures, which are now linked, has become too important politically for President Biden and Congressional Democrats to accept failure. In the end, the current bad optics concerning the White House’s poor handling of the pullout of American troops from Afghanistan are, at this time, insufficient to threaten prospects for passing the two bills.

Trade Analyst Laura Chasen: Secretary of State Blinken, “Trade Must Take a Back Seat”: In a speech at the University of Maryland’s School of Engineering, Secretary of State Antony Blinken was explicit about the Biden administration’s de-prioritizing of trade, both in the context of a vigorous domestic economy and for the U.S.’s geopolitical standing in the world. While Secretary Blinken’s explanation of the administration’s trade policy and how it relates to U.S. foreign policy interests was in line with USTR Tai’s and President Biden’s “worker-centric” trade policy, it also showed a strong affinity toward government-directed industrial policy. In fact, the Secretary was even more direct than other White House officials in suggesting that the Biden team does not see trade as a positive force.  In discussing the White House’s concentration on its two major initiatives, the Senate-passed physical infrastructure bill and the “human infrastructure” bill Democrats hope to pass without Republican support through budget reconciliation, Secretary Blinken said, “trade must take a back seat to domestic progress…. Our domestic renewal comes first.” 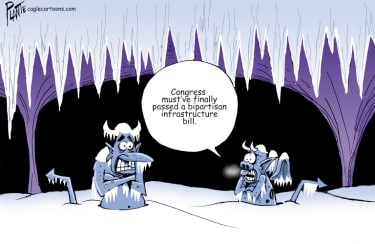