Ever since he hit that mid-range jump shot in the 1982 national championship game against Georgetown, I’ve been a Michael Jordan fan. I followed his career as a Chicago Bull, through the Olympics and the Dream Team, and as a shooting guard for the Washington Wizards. Due to a fortuitous internship at a sports marketing company my senior year in college, I even had the opportunity to play golf with him on several occasions (but that’s a different story). Now, as a lobbyist and Government Affairs Director, I find something MJ said more than thirty years ago not just relevant today, but also instructive. In 1990, there was a U.S. Senate campaign in Jordan’s home state of North Carolina. Democrat Harvey Gantt, the first black mayor of Charlotte, was running against incumbent Republican Jesse Helms. When Gantt’s election team realized that Michael Jordan had donated to them, they reached out to Jordan’s mother to see if she could persuade her son to lend his enormous celebrity to their campaign. He declined, and it was reported that he told his teammates that the reason he did so was because “Republicans buy sneakers too.” Asked to elaborate on the comment years later, Jordan explained that he never thought of himself as an activist, but as a basketball player; he was playing a sport and focused on his craft. Probably without realizing it at the time, Jordan was setting a limit on the proper use of his celebrity and defining political boundaries that made sense to him as an athlete. Looked at another way, Michael Jordan’s reticence to enter the political arena as an athlete did not cause him to stay out of the Senate race.  He made a financial contribution to a campaign he supported, acting in one of the ways available to a citizen in the civic and political arena, but he declined to traffic in his celebrity in that arena, because he had not earned his celebrity there. Similarly, companies do not need to speak out on social and political issues outside their expertise or reach, or in ways that would make their business more divisive than it needs to be. So how do companies define their own boundaries of acceptable political and social engagement? The corporate push to embrace ESG (environmental, social, and governance) principles provides one answer by defining business “materiality.” In essence, materiality means focusing on what matters—what adds value and what poses risk to continued success. More and more often, firms conduct materiality assessments to determine whether they should engage on an issue; the thinking being that if an issue is not ‘material’ to the business, there is no reason to get involved. Best Buy developed materiality criteria to guide its decision-making by identifying issues directly relevant to the company’s business, values, and employees. In one instance, they used the criteria to decide whether to engage on the issue of gun violence, and concluded that because the company doesn’t sell guns, the issue wasn’t material to them. Similarly, IBM uses “guidepost questions” to help decide which issues are material and whether to engage: Is the issue directly linked to the business? Does the company have a history of engaging on it? What are the stakeholders (employees, clients and shareholders) saying? What are competitors doing? Could the company make a meaningful difference by engaging? As the pressure on companies to engage on cultural, social, and political issues becomes more intense, firms would do well to determine their own boundaries by outlining the issues material to their business.

CATO Institute Calls President Biden’s Trade Policy ‘Polite Protectionism.’ As a presidential candidate, Joe Biden promised a change from the go-it-alone, my-way-or-the-highway trade policy of Donald Trump. Disappointingly, over the course of his first year, President Biden largely embraced the failed Trump policy of unilateralism and protectionism. While he and his administration have done so politely, without Trump’s bluster and bombast, the results have been mostly the same: a turn toward more trade protection and managed trade; toward a proposed industrial policy, which adds more restrictions; and toward a destructive unilateralism that threatens to continue undermining the multilateral trading system overseen by the WTO. If President Biden continues this trade policy, American recovery and prosperity are at risk. There is still time—at least three years—to end the reign of polite protectionism by pursuing a policy that benefits all Americans: a policy that seeks more trade liberalization, ends managed trade, halts trade-restrictive industrial policy, renews trade multilateralism, and supports international rule of law. CATO’s opinion can be read here: Biden and Trade at Year One: The Reign of Polite Protectionism.

White House Already Preparing for a Republican Majority, Says Eurasia Group. Staffing changes are already underway at the White House in preparation for Republican investigations that are likely to take place when the GOP takes control of Congress next year. In fact, Republicans are extremely likely to control at least the House (90% probability) and likely the Senate (65% probability), and while there are some Republicans who are pushing for a proactive agenda, most are eager to spend time  investigating the Biden administration and preparing for the 2024 presidential race. Republicans have a long list of items they are likely to investigate, including the withdrawal from Afghanistan, leaks of tax records from the IRS, and the Biden administration’s border policy. Republicans will also attempt to strip Democrats of their committee assignments, force NIAID Director Anthony Fauci to resign, agitate for domestic oil production, ban mask and vaccine mandates, and end federal educational policies that support teaching on race and gender issues in schools. The upshot of this approach is that the GOP’s focus on oversight, social issues, and the military will mean that fiscal policy is likely to be deprioritized in 2023.

Eurasia Group: Climate Legislation Reboot Seems to be on the Road to Nowhere. Although the White House is working to revive a slimmed down and climate-focused version of the Build Back Better (BBB) legislation that stalled late last year, Senate Energy Committee Chairman Manchin (D-WV) may still be un-gettable for a partisan bill moving via reconciliation. Sen. Manchin and moderate Republican (and former Energy Committee Chair) Sen.  Murkowski (R-AK) convened a bipartisan meeting at the Capitol this week to discuss climate where Manchin floated the idea of a bipartisan bill to multiple Republican colleagues. Recent history suggests that once there is an opening for bipartisanship, or at least the appearance of one, Manchin will hold firm against partisan alternatives, i.e. the BBB reconciliation bill. This makes sense given the West Virginia senator’s personal brand—he has gained 16 points in home-state approval ratings this Congress, more than any other member, with the growth coming entirely from Republicans. Even if a partisan reconciliation bill does start to move, Manchin is demanding provisions that likely block support from progressives, including a resumption of offshore oil and gas leasing. This is key, because just as losing Manchin’s vote dooms a reconciliation bill, so too does losing the likes of Sen. Warren (D-MA), Sen. Sanders (I-VT), or any number of House progressives. Although the Sierra Club indicated that it could stomach some oil and gas offsets to get a larger bill done, it is unlikely that what is being discussed will satisfy progressives. BBB, or a successor bill, is increasingly unlikely to move; if a bill does come together, it will need to pass by August to avoid being caught up by the mid-term election.

“We want to see Russia weakened to the degree that it can’t do the kinds of things that it has done in invading Ukraine.” — Defense Secretary Austin after visiting Kyiv with Secretary of State Blinken.

President Biden granted 3 pardons and 78 commutations this week in his first use of executive clemency. Although President Obama had issued no pardons nor commutations at the same point in his presidency, he finished with more commutations than any president in history, topping out at 1,715, more than his 12 previous predecessors combined.

Recession in the U.S.? Conference Board Says ‘Not so Fast.’ Although yield curves have inverted, the canary in the coal mine, the Conference Board’s Leading Economic Index (LEI), still sings. Risks to the economic outlook from the war in Ukraine to tightening Fed policy, notwithstanding, the LEI continues to point to positive growth over the next six to nine months. Importantly, the Leading Credit Index (LCI), a broad measure of credit conditions and a subcomponent of the LEI, does not portend a U.S. recession. Unlike a yield curve, which could be a harbinger of recession when it inverts and which is a singular measure, the LEI combines 10 indicators to provide a summary of future economic conditions and risks. 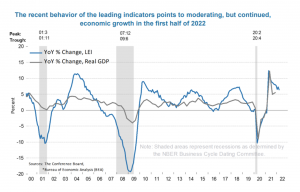