I’m amazed at the number of questions I continue to receive about former President Trump. It’s been more than a year and a half since the November 2020 elections, and in 30 years in the Washington office, I’ve never received as many questions from friends, family, and colleagues about a former president. The questions generally run along three lines. First, will he run again? I’m not sure, but if he does, he would most likely begin the race as the undisputed Republican front runner. Second, could he win? Sure, he could. He won once before, but there are no guarantees. What is certain is that turnout would be off the charts. At this point, I actually think that former South Carolina Governor Nikki Haley has the best chance of attracting independents and winning the general election. Third, what is Trump’s influence in this election? What last year’s elections and the primaries have shown is that Trump isn’t transferable down ballot unless Republicans do it themselves. In last year’s Virginia Governor’s race, Democrats tried to paint Glenn Youngkin as a ‘mini-Trump.’ The tactic didn’t work, Youngkin deftly avoided the Trump linkage, and won the race. It remains to be seen what will happen in November in states such as Ohio and, perhaps, Pennsylvania where Trump, in the form of endorsed candidates, may be on the ballot. The Eurasia Group answered some of these same questions in a recent briefing. They view the former president as the strongest and most popular politician in the Republican Party, and hold that there are three scenarios for his influence going forward. Eurasia Group’s three scenarios for Trump’s role in the GOP going into 2024 are as follows:

The Eurasia Group has developed a ‘Trump-o-meter’ to gauge the former president’s continuum along these scenarios. While Trump was in the pole position for the nomination a month ago, recent events have exposed weaknesses, and he has moved down the meter.

Eurasia Group: the Biden Administration’s Trade Quandary #1—Striking a Balance Between Sanctions Pressure and Addressing Inflation. Balancing sanctions escalation and inflation is proving to be difficult for the Biden administration, which wants to increase pressure on Russia without spiking energy costs and slowing growth ahead of the midterm elections. Treasury Secretary Yellen laid out a proposal to impose price caps on Russian oil exports to incrementally ratchet up pressure and cap Russian revenues as the EU moves toward an embargo at the end of the year. However, enforcing a cap would be difficult without secondary sanctions, which the EU and U.S. are reluctant to impose out of fear that market disruptions would spike oil prices. Domestically, Democrats are proposing legislation targeting oil companies for price gouging to show they are doing something to address inflation, a pure messaging exercise that has no viable path to Senate passage and would do little to address the actual drivers of high gas prices.

Politico: the Biden Administration’s Trade Quandary #2—How to Handle China Tariffs. A political dilemma is emerging as the Biden administration reviews tariffs on China. This month, the USTR launched a review of Trump-era tariffs on over $350 billion worth of Chinese imports. However, even before the review is complete, some administration officials are pressing the president to act. Commerce Secretary Raimondo said that tariff relief is “conceivable,” following comments from Treasury Secretary Yellen, who said lifting tariffs could have “some desirable effects” on inflation. And that came on top of remarks from a senior economic official at the National Security Council who said that tariffs on consumer goods like bicycles or apparel “serve no strategic purpose.” At the same time, officials are facing pushback from the very agency that administers tariffs—the Office of the U.S. Trade Representative. Its chief, Katherine Tai, has pushed back publicly on the idea that lifting tariffs would lower inflation and said it would cost her leverage at the negotiating table with Beijing. USTR’s pushback highlights an economic dilemma for the Biden administration. Lifting some tariffs would give the White House a visible example of acting to combat inflation, voters’ top concern ahead of the midterm elections, and it would please a vocal group of free-trading lawmakers and corporate lobbyists, who have been pushing for tariff relief since Biden was sworn in. However, lifting even some of the duties will draw flak from domestic industries and labor unions, constituencies Democrats desperately need to turn out in the November midterm elections.

Institute of International Finance (IIF), Conference Board Agree–Global Recession Risks Rising. IIF forecasts show the global economy teetering on the brink of recession as war in Ukraine, COVID lockdowns in China, and a hawkish Fed weigh on economic activity. The rising odds of a global recession will have important repercussions for investor psychology, making markets less tolerant of what they now view as unwarranted policy normalization. This will raise the risk of a market tantrum similar to what occurred after the Federal Reserve’s rate hike in December 2018, when markets judged Fed policy tightening to be out-of-step with the escalating trade war.  The ensuing sell-off in the S&P 500 ended that hiking cycle and Fed balance sheet run-off. The rising odds of a global recession elevate the risk of another such market tantrum today. In a similar view, the Conference Board has downgraded its global GDP forecast. After expanding by 5.9% in 2021, the Conference Board expects global economic growth to slow to 2.9% this year, representing a downgrade of a full percentage point from its February global economic outlook. While the Conference Board does not believe the global economy will fall into a technical recession this year or next, the war in Ukraine will cause recessions in Ukraine, Russia, and potentially other regions, particularly emerging economies.

President Biden: “You want to bring down inflation? Let’s make sure the wealthiest corporations pay their fair share.”

Jeff Bezos’ response: “The newly created Disinformation Board should review this tweet, or maybe they need to form a new Non Sequitur Board instead. Raising corp taxes is fine to discuss. Taming inflation is critical to discuss. Mushing them together is just misdirection.”

President Biden: “Under my predecessor, the deficit increased every single year. This year, we’re on track to cut the deficit by $1.5 trillion—the biggest one-year decline ever. It matters to families, because reducing the deficit is one of the main ways we can ease inflationary pressures.”

Jeff Bezos’ response: “In fact, the administration tried hard to inject even more stimulus into an already over-heated, inflationary economy and only MANCHIN saved them from themselves. Inflation is a regressive tax that most hurts the least affluent. Misdirection doesn’t help the country.”

The White House: “It doesn’t require a huge leap to figure out why one of the wealthiest individuals on Earth opposes an economic agenda for the middle class that cuts some of the biggest costs families face, fights inflation for the long haul, and adds to the historic deficit reduction the President is achieving by asking the richest taxpayers and corporations to pay their fair share. It’s also unsurprising that this tweet comes after the President met with labor organizers, including Amazon employees.”

Jeff Bezos’ response: “Look, a squirrel! This is the White House’s statement about my recent tweets. They understandably want to muddy the topic. They know inflation hurts the neediest the most. But unions aren’t causing inflation and neither are wealthy people. Remember the Administration tried their best to add another $3.5 TRILLION to federal spending. They failed, but if they had succeeded, inflation would be even higher than it is today, and inflation today is at a 40-year high.”

The Texas state flag is the only state flag allowed to be flown at the same height as the American flag.

Sen. Lindsey Graham (R-SC) wants to increase the retirement age for pilots, a move backed by some aviation groups facing labor challenges. Sen. Graham says his bill would extend pilots’ mandatory retirement age by “a couple of years.” Lawmakers are honing in on the pilot shortages, holding hearings, and considering solutions as airlines increasingly delay and cancel flights, while also increasing fares. 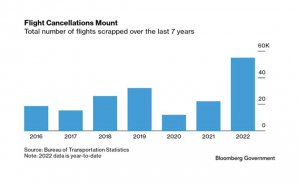