The Pew Research Center published a detailed analysis of the 2020 presidential election,and it helps explain how Joe Biden was able to accomplish what Hillary Clinton could not—and why President Trump came closer to being reelected than many pre-election surveys predicted. Five factors accounted for President Biden’s success: (1) his campaign reunited the Democratic Party; (2) he maintained solid support among African Americans; (3) he appealed to the center of the electorate across party lines; (4) he regained much of the support among men that Hillary Clinton lost while retaining her support among women; and (5) his candidacy continued the shift of educated voters towards the Democratic Party. Despite, or perhaps because of, non-stop controversy about his policies and personal conduct, President Trump managed to raise his share of the popular vote from 46% in 2016 to 47% in 2020. In essence, his core coalition held together, and he gained in a few new voter segments. In terms of his core coalition, President Trump’s consistent appeal to his base bore fruit, and in terms of new voter blocs, the changing Hispanic vote may be the most notable feature of the 2020 election. Although many analysts believed that Mr. Trump’s tough border policies would drive Hispanics away from his candidacy, his share of the Hispanic vote grew by 10 points. While turnout for the 2020 election surged to its highest level in a century, turnout in future elections will depend on whether mobilization is symmetrical, as it was in 2020, or asymmetrical, as it is when one party is more motivated and the other is complacent. Going forward, however, Republicans are facing a structural dilemma. For the most part, their coalition depends on groups—notably whites and voters without college degrees—whose share of the electorate is declining. In addition, as elderly Americans, who tend to support Republican candidates, leave the electorate, they will be replaced by younger voters whose views of the Party are far less favorable. Despite the changing demographics, if the Democratic Party is regarded as going well beyond the center of the electorate, gains among suburban voters and moderate Republicans could evaporate. Furthermore, if Democrats continue to misread Hispanic sentiment, their shift toward Republicans is likely to continue. For Hispanics and whites, the evidence suggests that a distinctive working-class consciousness is more powerful than ethnic identity. So, why does all of this matter? Consider that there has been no flood of Senate votes over the past two months on hot-button progressive legislation from the House—nothing on voting rights, immigration, police reform, gun control, and more importantly, nothing on fiscal legislation nor appropriations bills that have to pass annually. In fact, there has been no budget resolution, and not a single draft on taxes, clean energy, defense authorization, or the debt ceiling. With the House and Senate so evenly divided, it may be the 2022 midterm elections that eventually determine the direction of policy.

Trade Analyst Laura Chasen: TPA is gone for now: The president’s Trade Promotion Authority (TPA) expired on June 30. Separately, the USITC released a report assessing the impact of trade agreements passed under TPA. TPA gives a president the power to submit trade agreements to Congress under fast-track procedures. Under fast-track, an FTA has a better chance of being approved because it cannot be amended, debate is limited, and it cannot be filibustered. With TPA out of place, other countries are less eager to negotiate trade deals with the US because it is less likely to pass Congress. TPA legislation also sets out certain conditions Congress wants the administration to meet in negotiating new trade agreements, such as requirements for consultations with Congress, goals for the talks, what sectors should be included, and what the administration can/cannot do.

The Observatory Group on Inflation: The surprisingly strong acceleration of inflation this year has become an important factor in prompting Fed policymakers to view the inflation outlook as much more uncertain. The elevated uncertainty has led a number of policymakers to anticipate interest rate hikes before the end of 2023 and, possibly, in 2022. However, the view remains for most of the FOMC that if the 2021 inflation surge proves transitory, it will be much later before the Committee actually hikes rates. In other words, some time still exists before the implications for actual policy plays out.

Eurasia Group: Another Russia-linked cyber incident raises pressure on the White House: A massive ransomware incident occurred over the July 4th weekend. The latest revelation does not shift the view for a potential response—while the incidents are unlikely to directly result in major sanctions, the cumulative effect will be to increase pressure on President Biden to demonstrate positive developments from his strategy of engagement with Russia by early fall, before domestic political pressure potentially forces a more aggressive response. In fact, cyber incidents are only one of a range of issues creating problems in the US-Russia relationship, with Ukraine and Nord Stream 2 pushing US political interests toward more aggressive policy. Calls for a more aggressive Russia policy are bipartisan and popular with voters; consider that Sen. Cruz (R-TX) is holding up State Department nominations in exchange for stronger Nord Stream 2 sanctions, and the democratically controlled House Appropriations Committee approved language blocking Nord Stream 2 sanctions waivers.

— Actor Matthew McConaughey, who is considering a run for Texas Governor

As a follow-up to last week’s note, Toyota has halted donations to anti-election Republicans. The car company has backtracked on its political giving policies, re-adopting a ban on donations to the 147 Republicans who voted against certifying Electoral College votes for Joe Biden on Jan. 6. This year, the automaker’s PAC had donated $56,000 to 38 members who opposed the count. 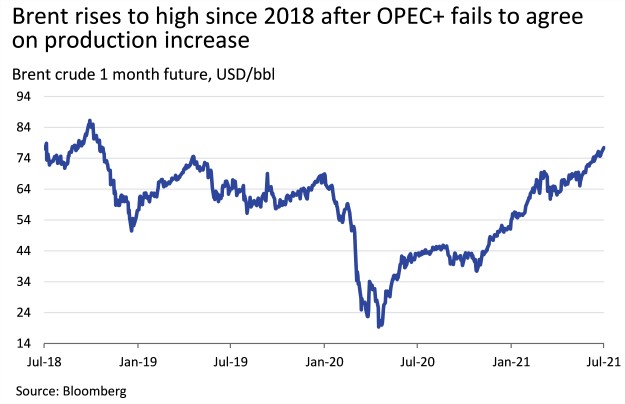